An Oklahoma church member found himself in urgent need of a transplant. A minister’s wife answered the call — eventually.

Shannon Wilburn heard the voice in her head.

What she didn’t know was whether the voice was her own or that of the Holy Spirit.

Related: A ‘big’ step for one of America’s largest Churches of Christ

Wilburn, whose husband, Mitch, preaches for the 1,700-member Park Plaza Church of Christ in Oklahoma’s second-largest city, was sitting in worship one Sunday in September 2016.

That morning, an announcement informed the congregation that Walt Erwin, a member of Park Plaza’s branch campus in suburban Jenks, needed a kidney donor.

Thirty-five years earlier, Erwin, now 66, had received a kidney from his older brother, Frank. But he desperately needed a new one. And he was having trouble finding a donor. Without a suitable match, he faced ongoing dialysis. That would mean a decreased quality of life and a shortened life expectancy.

“What is going on? I barely know this guy, and I don’t need to give him my kidney.”

“What is going on?” she thought as she wrestled with the voice in her head. “I barely know this guy, and I don’t need to give him my kidney.”

Wilburn, now 47, had plenty of reasons to ignore the voice.

For one, she is extremely busy.

She is the CEO and co-founder of Just Between Friends Franchise System Inc., a children’s and maternity consignment business with more than 150 franchises in the United States and Canada. Her full-time job keeps her in the air frequently. She also serves on the board of trustees of Oklahoma Christian University in Oklahoma City.

Another argument against paying attention to the voice: Her husband had battled cancer the previous year. He had undergone surgery in early 2015 and been declared cancer-free later that year. She, too, had been hospitalized after a scalp infection had caused her to start losing hair.

Lying down on another gurney wasn’t on her wish list. 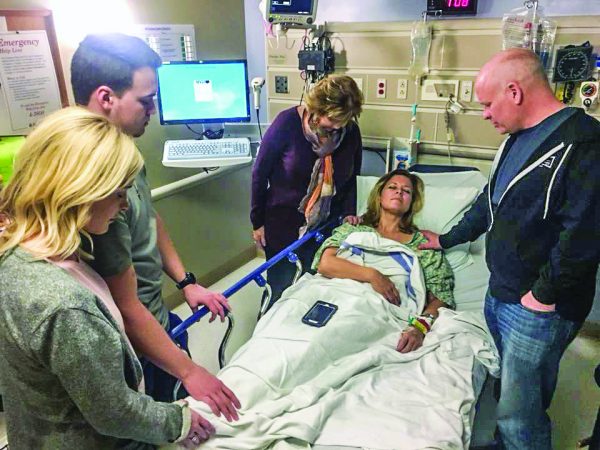 Shannon Wilburn’s loved ones pray with her before the transplant. Pictured with Wilburn are her son, Jake, and his girlfriend, Kenzie; Shannon’s mother, Pam; and the donor’s husband, Mitch.

Wilburn decided that the voice in her head had to be her own, not God’s.

Every so often, though, a reminder about Erwin’s dire need for a kidney would catch her attention. And she’d wonder.

In March 2017, Mitch and Shannon Wilburn bought a patch of land. The land happened to be near property owned by Walt and Kathy Erwin.

About three months later — in June 2017 — Mitch Wilburn came home and casually remarked to his wife, “Walt is spraying poison ivy killer on our land.”

“Of course he is,” Shannon Wilburn said she thought to herself.

“One of my friends just donated her kidney to a perfect stranger.”

“It was like every month,” she recalled, “there would be a reminder, ‘Hey Shannon, don’t forget it’s you.’”

In July 2017, on a flight with one of her company’s executive team members, the colleague mentioned, “One of my friends just donated her kidney to a perfect stranger.”

“I looked at her and was like, ‘Why did you just say that?’” Wilburn said. “That’s the moment when I felt like the Lord turned up the heat and just made me think about it every week.” 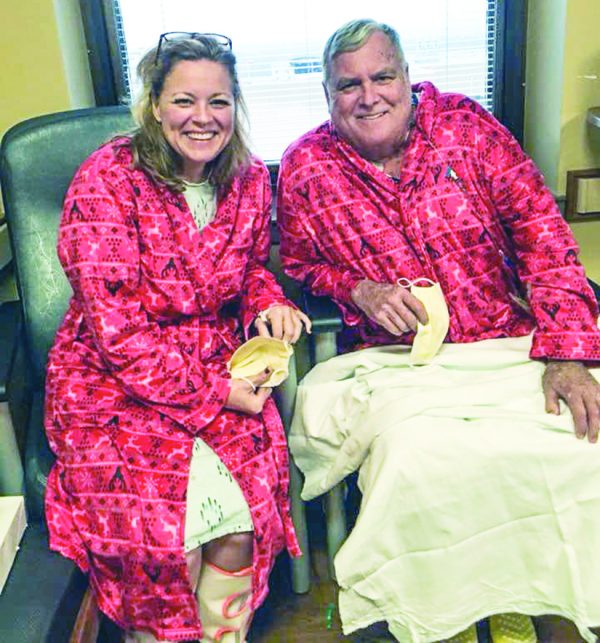 Shannon Wilburn and Walt Erwin, in matching outfits, visit after the surgery.

In September 2017 — about a year after she first learned of Walt Erwin’s need for a kidney — Wilburn accepted an invitation to a brunch with women from church.

When Kathy Erwin showed up, Wilburn shook her head.

At the end of the brunch, Kathy Erwin asked the group for prayers that her husband would find a donor. 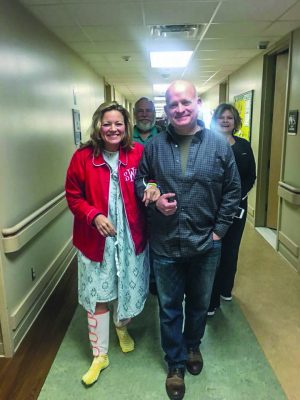 Shannon Wilburn, with Mitch, celebrates the successful transplant with a walk

“As soon as the prayer time was over, Shannon started asking me all these questions,” Kathy Erwin said. “Not the normal kind of questions like, ‘How’s Walt doing?’ She asked me about being a donor, like, ‘What do you have to do?’

“I was thinking to myself, ‘Is Shannon thinking about being a donor?’ And I came home, and I told him, ‘Shannon was there, and she was asking all these questions.’”

Even if Wilburn decided to be tested, the odds were against her kidney being a match for Walt Erwin.

“The main challenge is that I have developed antigens from my brother’s kidney, which makes it tougher to find a match,” Erwin said. “Then steps in God and Shannon. Problem solved!”

Wilburn decided she no longer could ignore the voice.

But first, she had to tell her husband, whose immediate reaction was concern for her and worry about possible risks.

He couldn’t shake the memory of his own health scare. He didn’t want to lose her, he told his wife.

Their children — son Jake, a 2017 graduate of Oklahoma Christian, and daughter Ashton, a student at Abilene Christian University in Texas — needed their mother.

A year of contemplating the possibility of donating her kidney had removed any fear on Shannon Wilburn’s part.

However, the prospect was new to Mitch Wilburn.

Tough match? Not for God

Over the next few weeks, Mitch and Shannon Wilburn discussed the possibility. After praying, he became more open to it.

One night, the television news featured a woman who donated a kidney.

“I was like, ‘The Lord orchestrated that,’” Shannon Wilburn said. “So I looked at him and said, ‘Babe, what do you think?’ Because I was like, ‘If there’s any time he’s going to say yes, it’s going to be right now.’”

In October 2017, she arranged tests to see if she was a match. 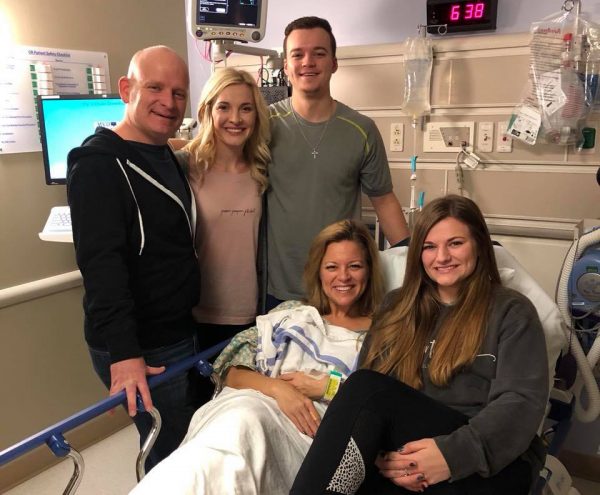 Shannon Wilburn with loved ones, including her husband, Mitch; her son, Jake, and his girlfriend, Kenzie; and her daughter, Ashton.

At church one Sunday, Walt Erwin hugged Mitch Wilburn and thanked him for his part in Shannon Wilburn’s decision.

When the test results confirmed that Shannon Wilburn was a match, she called Kathy Erwin with the news.

“I was by myself when she called and told me, because he was at dialysis,” Kathy Erwin said. “But after I talked to her, I jumped up and down first, and I said, ‘Hallelujah!’ and ‘Praise you, God.’ And then I laid on the floor, and I rolled around, and I cried because I was like, ‘God, this is just so awesome.’”

The surgery at St. John Medical Center was scheduled for December 2017, just before Christmas.

Before the procedure, the Wilburns and the Erwins got together to get to know each other better and pray.

“They are such a Godly, spirit filled couple!” Shannon Wilburn wrote on Facebook.

At Shannon Wilburn’s request, hospital staff rolled their beds side by side just before the transplant so she and Erwin could hold hands and take a picture.

Doctors described the transplant as a total success.

Related: ‘The workshop is coming to an end, but that vision is not.’

Immediately, Walt Erwin said, “I noticed my energy level was probably twice what it was … like a shot of energy had been given back to me.”

All along, Wilburn had one question: Why did God want her to donate a kidney to a man in his 60s? Wouldn’t it make more sense to bless a younger person, someone with more years ahead of him? 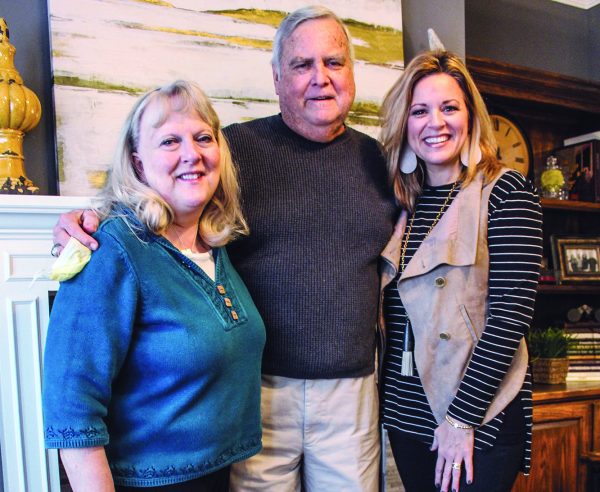 Kathy and Walt Erwin and Shannon Wilburn pose for a photo at Wilburn’s house as the Park Plaza Church of Christ members reflect on Wilburn’s donation of a kidney to Walt Erwin.

But after the surgery, Wilburn heard Erwin — a father of three adult children, all Oklahoma Christian graduates, and a grandfather of seven — liken himself to Hezekiah. Isaiah 38:5 notes that God heard Hezekiah’s prayers and added 15 years to his life.

“I want to be around to watch my grandkids come to know and love the Lord,” Erwin said.

For his part, Erwin said he can’t ever thank Wilburn enough. But she insists she doesn’t need thanks.

TULSA, Okla. — From outside, the stately, colonial-style building at… 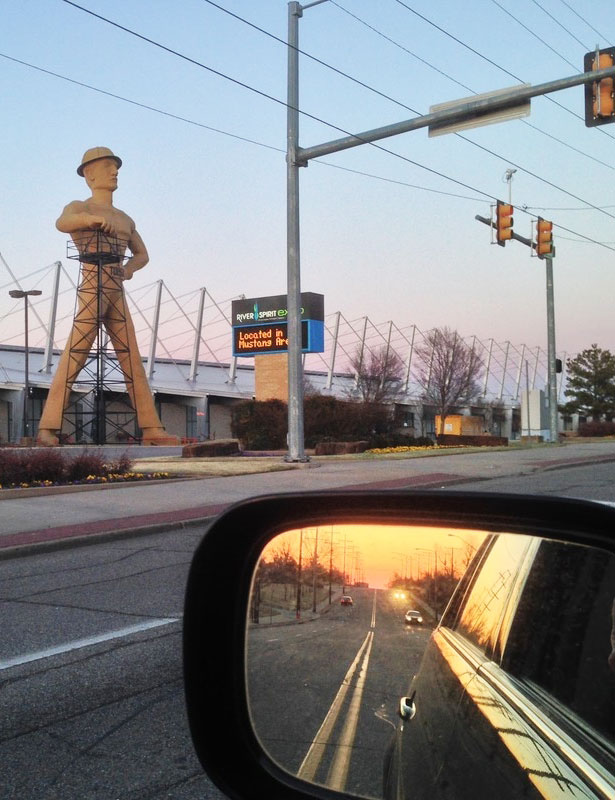 TULSA, Okla. — Humility is strength born of prayer and… 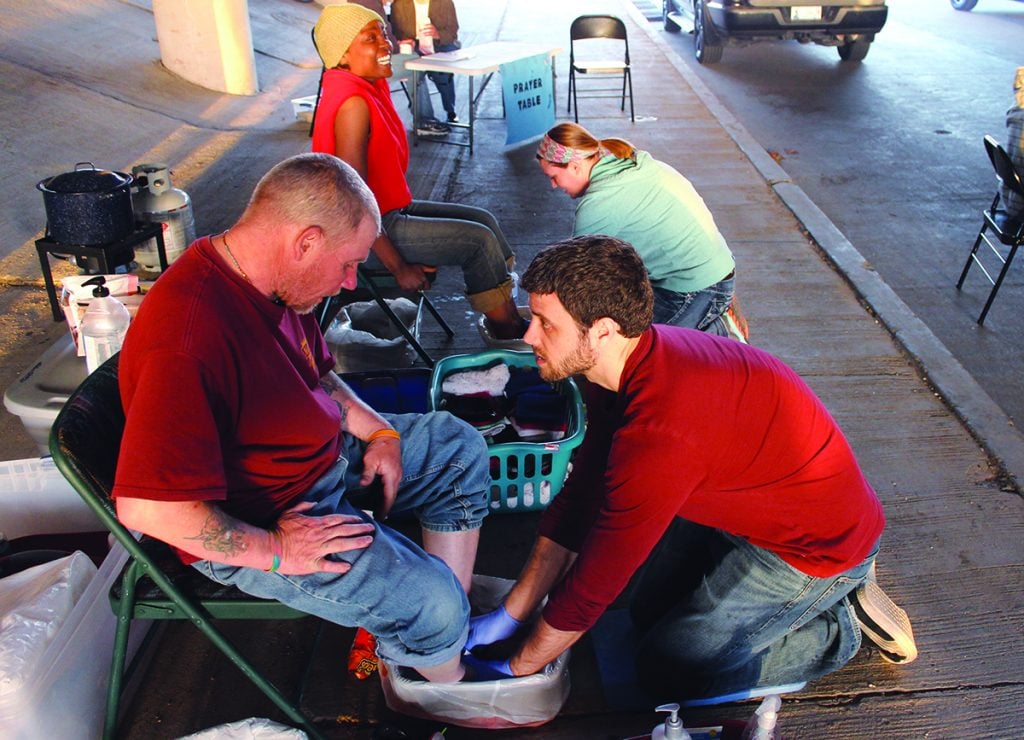 TULSA, Okla. — Street people lying on the grass and…