More than 1.8 million refugees have risked their lives to reach Europe since 2014. Many have found Jesus — and are transforming the continent’s churches. This is one couple's story.

VIENNA, Austria — “It was not our choice to come here. We were getting together one day at the house church, and the information leaked out.

“The police came to the house and arrested all the people. We didn’t even get to go back home. We ran away.”

Speaking through a translator, Masoud and his wife, Mahboubeh, share the harrowing events that brought them 3,000 miles from their native Iran to this European capital a year and a half ago. A lifetime ago. 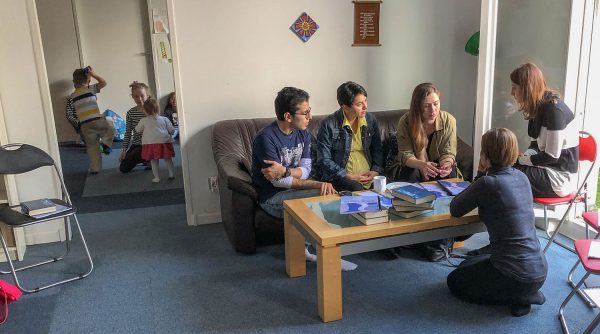 Masoud and Mahboubeh speak with fellow Iranians before Sunday worship with the Danube Church of Christ.

Baptized in April, the couple worships with the Danube Church of Christ, a small congregation that meets on the east side of Vienna.

This city of 1.7 million souls is home to thousands of refugees from the Middle East. Many are here because of the bloody conflicts in Syria, Iraq and Afghanistan.

Masoud and Mahboubeh are here because of Jesus.

The couple, known for their bright, near-constant smiles, struggles to be heard over the gleeful noises of children playing at their feet. It’s Fellowship Sunday, and the Danube church’s apartment overflows with visitors from Albania, Romania and the U.S. who just attended a ministry workshop in nearby Slovakia. And kids.

“When we came here, we thought Christianity was the official religion,” Masoud says. He and his wife expected cathedrals.

“Then we came here and said, ‘OK, they are just like the church in our country!’” he adds with a laugh. 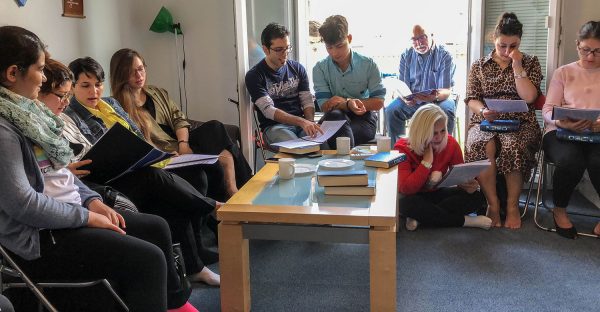 Masoud helps a fellow worshiper look up songs during Sunday service with the Danube Church of Christ.

They actually thought about going somewhere else. Maybe a more “official-looking” church would help their asylum case.

But soon, “none of this mattered,” Mahboubeh says, “because we fell in love with the people.”

FROM IRAN TO AUSTRIA

Masoud and Mahboubeh grew up in a devout Iranian city known for its shrine to a prominent imam, visited annually by millions of pilgrims of the Shiite Muslim faith. 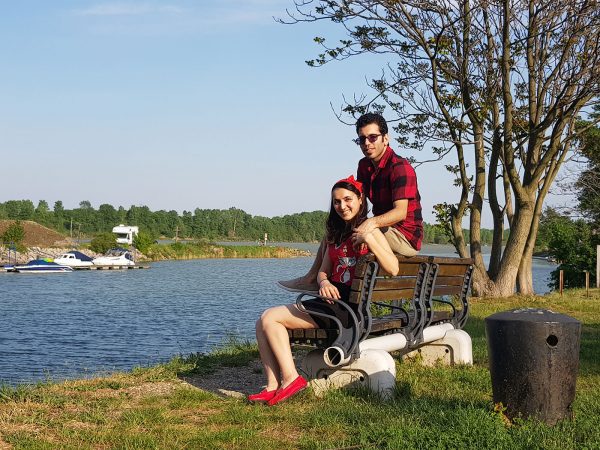 Masoud and Mahboubeh by the Danube River in Vienna.

They worked as professional photographers. Soon after they married, Mahboubeh found herself struggling under the weight of her new family’s expectations. They practiced a stricter form of the faith than she was used to. It created tension in their marriage. They struggled.

A friend noticed and shared with them a secret she had kept from the couple for two years. She was part of a house church that studied the Bible. Would they like to visit?

The group met on Fridays. Sundays are workdays in Iran — too suspicious. In the church they found purpose and began to feel a new sense of peace in their marriage.

Then the police came. Friends helped the couple escape and gave them money to pay someone to drive them out of the country. They soon connected with a network of smugglers and paid for passage to Germany.

They’re not sure what route they took to reach Europe, probably through the Balkans. They spent three days in the back of a transport truck — doors closed, not knowing where they were. 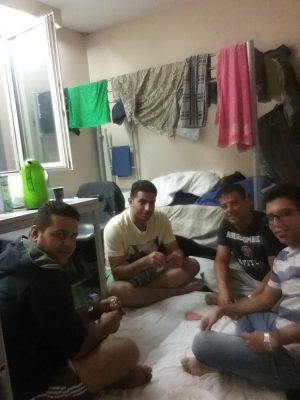 Masoud speaks with fellow refugees at a camp in Heidelberg, Germany.

Finally, they arrived in Germany, joining the ranks of 1.8 million refugees who have arrived in Europe since 2014, the United Nations reports. They applied for asylum and learned about a European Union rule called the Dublin Regulation, designed to keep refugees from applying to multiple governments. They would have to make their case in their first point of entry to the EU. Years ago, before the persecution, they had visited Austria.

After five months in Germany their lives were uprooted again — this time to Vienna.

Among the refugees here was a family friend from their hometown. They asked him about churches they could visit. Their friend had a friend who had visited a church that met in an apartment. He knew the way. It’s small, he told them, but the people are friendly.

‘I WAS STRUCK BY THEIR HUNGER’

The Danube Church of Christ was doing its best to share Jesus with the influx of asylum seekers at its door but had little to show for it, says Will Kooi, a member of the Vienna Team Mission.

Four couples from the Memorial Road Church of Christ in Oklahoma City launched the mission in 2007. One of those couples, Jake and Amanda Haskew, remains. Kooi and his wife, Holly, joined them as missionary apprentices and became part of the team in 2014. 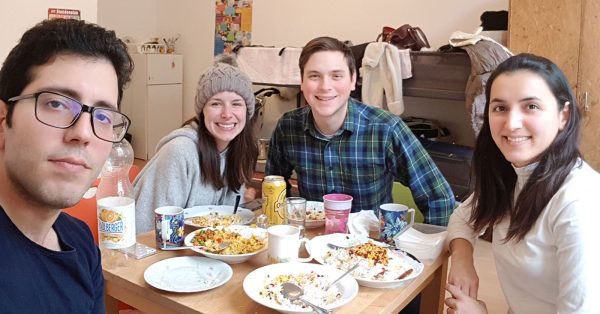 Masoud and Mahboubeh have dinner with Will and Holly Kooi.

Members of the church — a mix of Austrians and expatriates from the U.S. — had visited refugee centers and conducted Bible studies, Will Kooi said. The needs at the shelters seemed endless, and what the Christians had to share seemed too humble to make a difference.

Then Masoud and Mahboubeh arrived.

“We were so happy,” Will Kooi says. After two years of attempts to work with refugees, “to have some just walk in our door, already interested in the Bible … it’s really just like God sent them to us.” 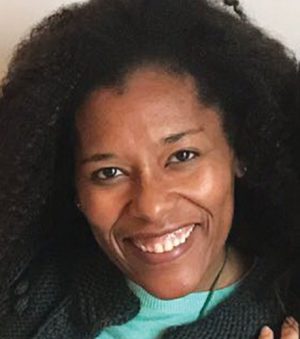 They weren’t refugees for long. The church embraced the couple, who soon became known for their bright smiles and their willingness to serve.

“I was struck by their hunger,” says church member Tamika Rybinski. “Looking at them during the lessons would bring tears to my eyes. Mahboubeh would physically lean toward the Word of God. It was obvious it was speaking to her, like Jesus was calling out to her. My heart yearned for her to know Jesus.”

The language barrier was a problem, so the couple found an interpreter, another refugee from Iran, and brought her to church services. Soon, they decided to be baptized — something they had wanted to do back home but never could. 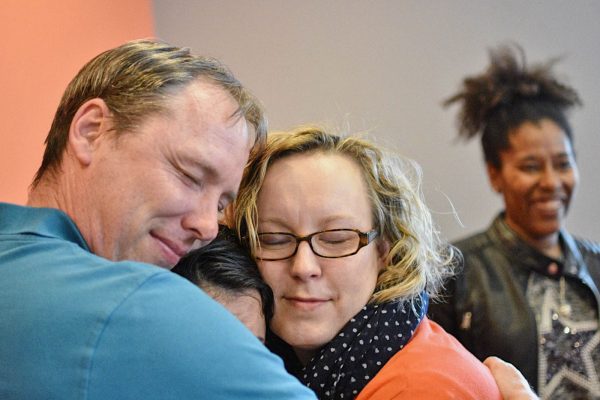 After baptism, Mahboubeh is smothered by hugs from Jake and Amanda Haskew.

After their baptisms, “a chain reaction started,” Rybinski says. The couple invited fellow asylum seekers to church and studied with them. Some asked to be baptized.

So did their interpreter.

“I start coming here, and everything starts changing in my life,” the interpreter says, pausing from translating the couple’s story to share some of her own. “It wasn’t just with my finances or my refugee process. In my heart, inside me, something really changed.”

Now the church has a growing Iranian contingent on Sundays. The Koois’ 2-year-old, Lucy, darts among them, jumping into their arms, as the church members sing hymns in German and English and reads Bible verses in Farsi. 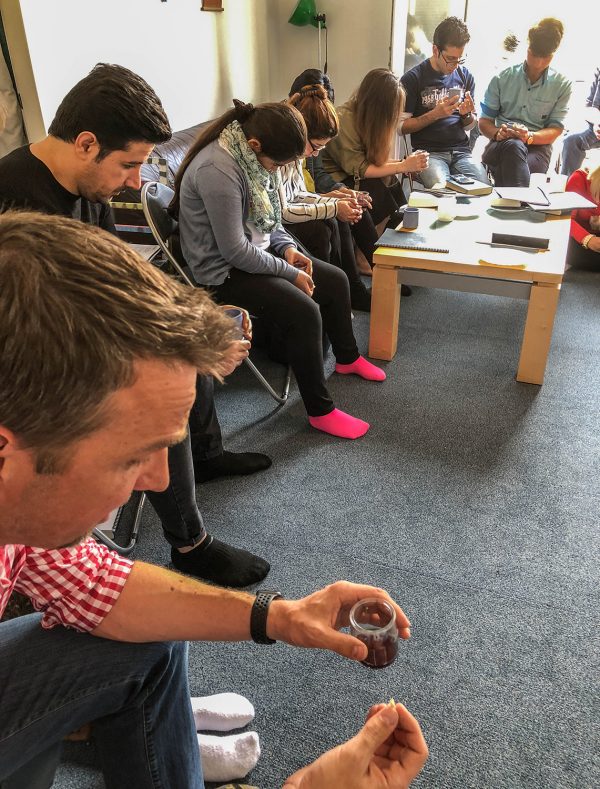 Bart Rybinski prays for the Lord’s Supper during Sunday worship with the Danube Church of Christ. Rybinski is vice president, European operations, for Eastern European Mission.

“All of our families spend time with and are connected with our Iranians,” Rybinski says. “We have all had them in our homes. Three of the girls are spending Christmas with us this year, and I cannot wait.

“The community they have brought into the life of the church makes me think of the descriptions you read of the early church. You can just feel the Spirit moving about, and we are all getting stronger, using our gifts and blessing one another. I haven’t been this excited about church in years. ”

Only when asked about Iran — if they’d like to return someday — do the couple’s characteristic smiles fade.

Mahboubeh laughs out loud at the notion, the absurdity of it. But her laughter quickly turns to tears, then sobs.

She’s six months pregnant with their first child, a boy. She doubts he’ll ever be able to see his parents’ homeland or be held by his grandparents. 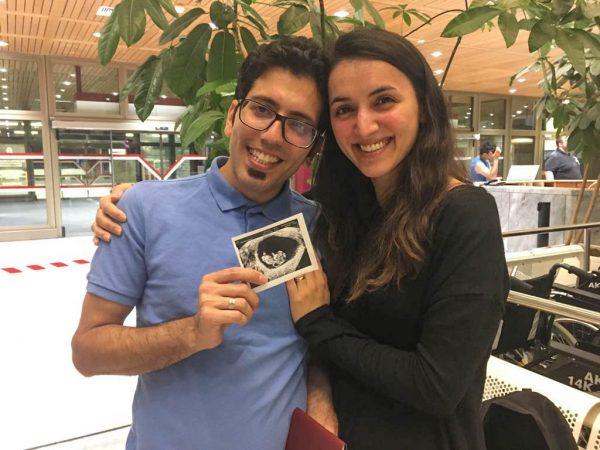 Masoud and Mahboubeh show off their first baby photo.

But there is hope, her husband says. After all the hardships that brought them to Vienna, where they now live as legal residents, they have a new family.

“It was like God was planning for us to come all this way to get here,” he says. “The beautiful point of all the difficulties is that it was God’s planning.”

“Masoud and Mahboubeh were the start of something beautiful,” she says. “They represent to me hope, the power of God’s Word and his love for everyone — expressed through one another.” 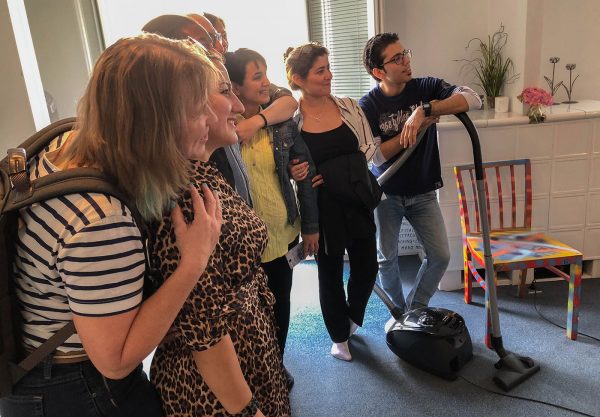 After cleaning up the church’s apartment, Masoud and friends pose for a photo. 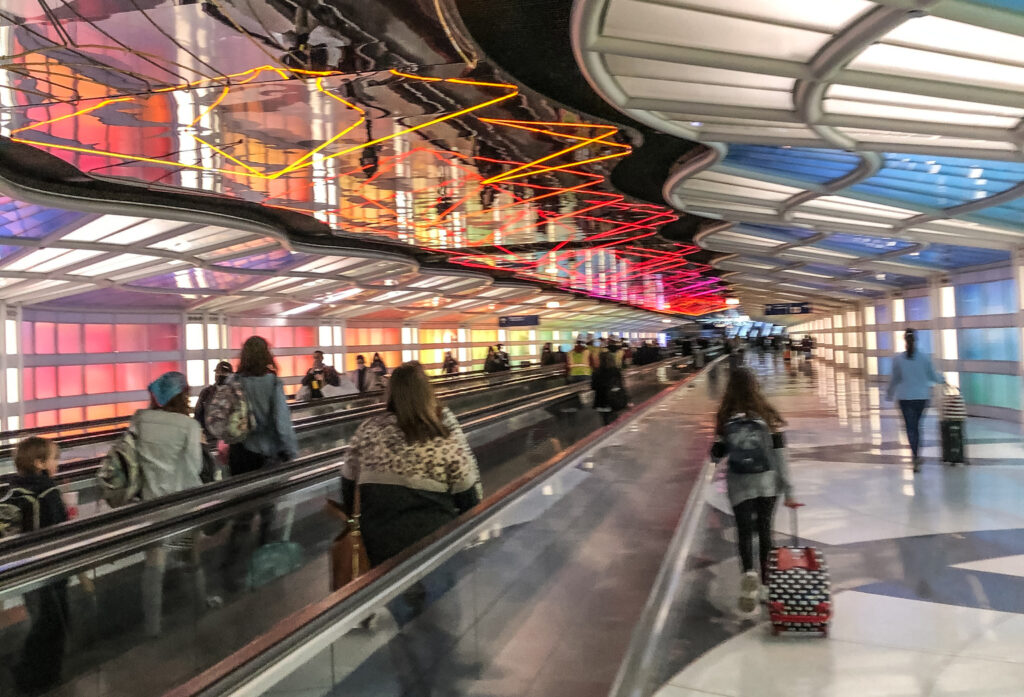