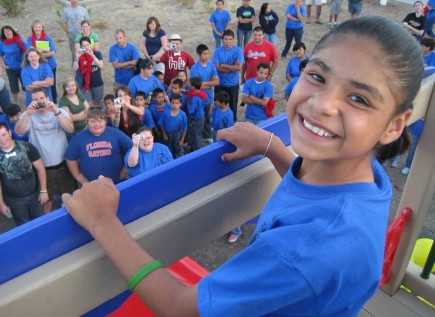 ‘God Provides’ a playground for children’s home in Mexico

Erik Tryggestad
A new playground at the City of Children is aptly named “God Provides Park.”
Three church members who led mission teams to the children’s home in Ensenada, Mexico, this year — Brian Lea, Rob Regg and Kevin Watson — had the idea to build a playground to replace a humble one on the campus. Regg researched playground companies and decided to contact Kentucky-based Play Mart.
“After discussing their budget, they came up with a playground system they could afford,” said Jeff Fincher, who oversees the children’s home.
“However, the quoted price was at the top of their budget, and it didn’t include shipping the playground to San Diego, getting it across the border or having it delivered to the City of Children.”
At first, Play Mart employees told Regg that they couldn’t deliver the equipment before a planned mission trip to install it. A few days later, the church member got an e-mail from the company’s owner, who had visited the ministry’s Web site.
Not only would the delivery be on time, the owner told him, but the company had decided to make the playground bigger than the church members had requested — able to accommodate 100 children instead of 30 to 40.
The ministry expected to pay up to $7,000 in importation fees for the 2.2tons of playground equipment, Fincher said, but after “lots of talking,bartering and prayer” the total cost came to only $800.
Volunteers from Tennessee, Virginia and Greater Atlanta Christian School helped clear the field and prepare the land for the park.