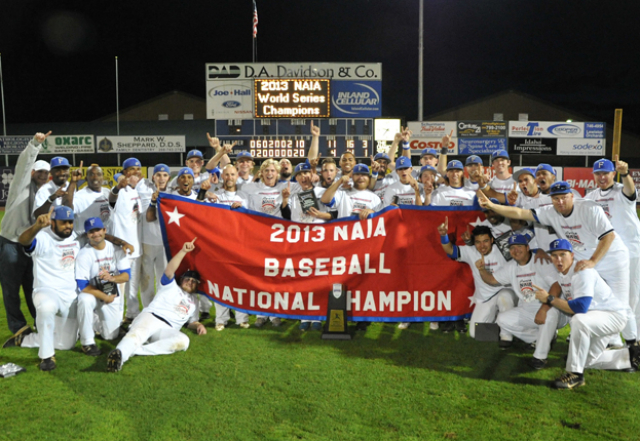 The baseball team from Faulkner University, a Montgomery, Ala., university associated with Churches of Christ, defeated Lewis-Clark State College in Lewiston, Idaho, 11-4 to win its first-ever World Series title from the National Association of Intercollegiate Athletics (NAIA).
The university reports:

After the first out in the bottom of the ninth inning, Faulkner right fielder David Bishop started tearing up. After the second, he literally began to cry. “I was hoping they weren’t going to hit the ball to me after that,” the senior said, “because I don’t think I’d have been able to see it.”
Bishop was just one of many wearing Faulkner blue fighting back emotion here Thursday night, as Patrick McCarthy‘s Eagles finished off a perfect week with an 11-4 victory over Lewis-Clark State to capture the program’s first-ever NAIA World Series championship at Harris Field in Lewiston, Idaho.
“There are so many people who have put hours and hours of work into the success of this team,” a red-eyed McCarthy said after his team’s fifth win in six days. “This is for the entire Faulkner Family. God has blessed this team and it all played out tonight. A newspaper guy asked me right after the game what I felt was the key point in the game. I told him the only thing I could remember about the game was the last out. I’ll remember that for the rest of my life.”