At the 10-year anniversary of Hurricane Katrina, Christians who survived keep counting their blessings.

NEW ORLEANS — Ten years after Hurricane Katrina waged war on the Gulf Coast, Christians in hard-hit New Orleans are looking back — and ahead.

Frank J. Harden, an elder of the Louisa Street Church of Christ, recalls fleeing 260 miles west to Beaumont, Texas, as the “storm of the century” raged toward the Crescent City.

“The Lord was with us, trust me,” Harden said. “I mean, every move we made was the right move.”

In the Lone Star State, the Harden family — Frank, wife Annastasia and daughters Jennifer and Frankie, then 13 and 11 — found fellow Christians willing and eager to help them and other Louisa Street members.

Posted by The Christian Chronicle on Sunday, August 16, 2015

“All of the Churches of Christ got together to help us,” Harden said, specifically mentioning Beaumont’s Ridgewood, South Park and Westgate congregations. “Oh, man, they really, really, really took care of us. I mean, we didn’t want for anything.”

Flooding during Katrina claimed the home of Yolanda White, then a member of the Carrollton Avenue Church of Christ.

White and her family escaped to Grand Prairie, Texas, where they showed up the Sunday after the storm at the Freetown Road Church of Christ.

“They took us in and told us we were not going anywhere,” said White, who stayed in the Dallas area about a year before rebuilding in New Orleans. “They stuck by us the entire time.

“Never did you hear the word ‘refugee,’” she added. “They took care of us like we were home until the time we came home.” 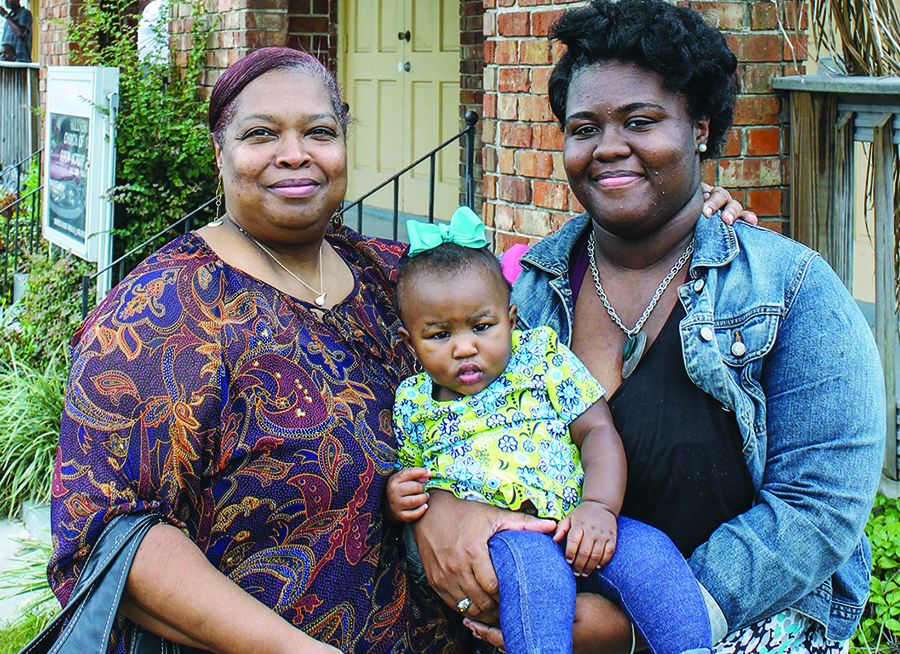 Hurricane Katrina survivor Yolanda White, left, poses with her granddaughter Jaelyn, 10 months, and daughter Dorionne Huntington at the Hollygrove Church of Christ in New Orleans. (PHOTO BY BOBBY ROSS JR.)
NEW ORLEANS, BACK FROM THE GRAVE

About three weeks after the hurricane made landfall on Aug. 29, 2005, Harden and deacon Wayne Treaudo visited the disaster zone.

Police wouldn’t let most people off the interstate, but an officer — the nephew of a Louisa Street church member — granted the church leaders access.

“It looked like a nuclear bomb had gone off,” Harden said of the Louisa Street church property in New Orleans’ devastated Ninth Ward. “You couldn’t even see the streets. It was just cars on top of buildings. Brother Treaudo started crying when he saw it.”

Harden called his wife in Beaumont and told her, “Forget about New Orleans. It’s history.” 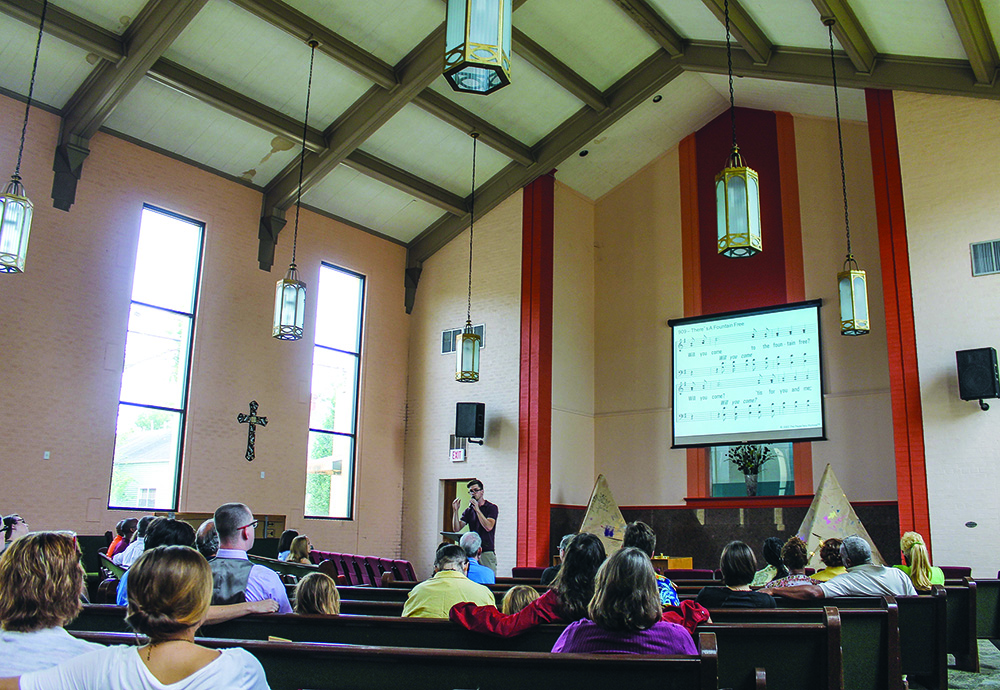 But as it turned out, New Orleans wasn’t history.

Neither was the Louisa Street church, even though it remained closed for more than three years.

“We didn’t want to go building back and be the only ones there,” elder Vinston Flakes explained.

But as residents returned, so did the church.

The Louisa Street church reopened in February 2009 — one of the last hurricane-damaged Churches of Christ to do so.

“I thought New Orleans would never be back, but God made it possible,” deacon Mac Stampley said. 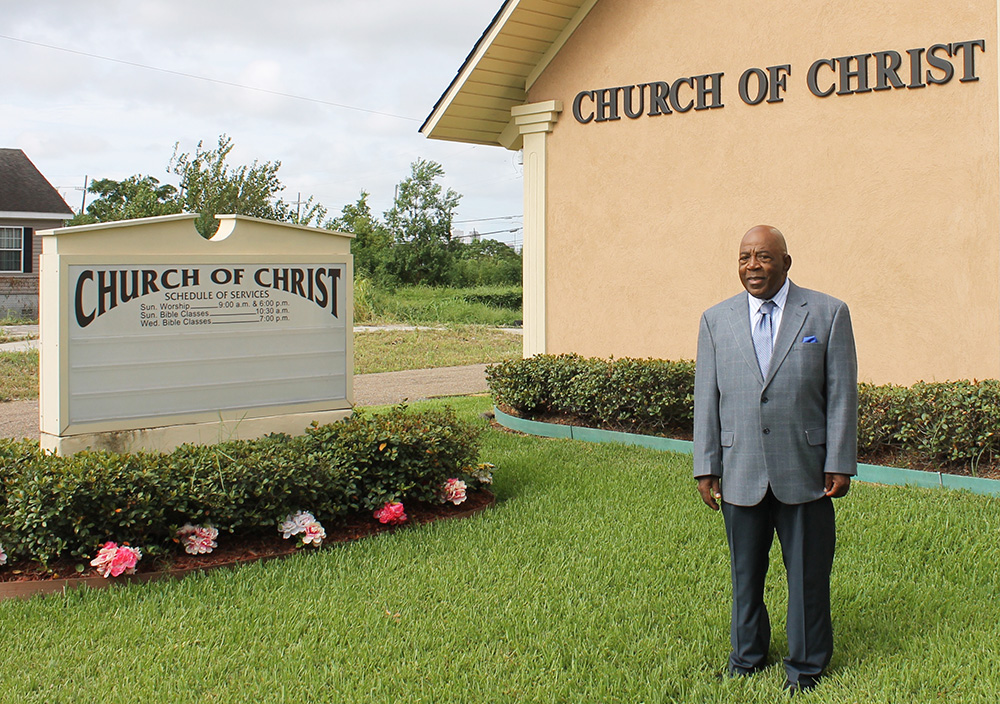 Elder Vinston Flakes stands outside the Louisa Street Church of Christ, which reopened in 2009. (PHOTO BY BOBBY ROSS JR.)

Insurance only partially covered the $400,000 renovation.

Christians across the nation donated sweat and money to help Louisa Street — and other Churches of Christ throughout the Gulf Coast — overcome the storm.

Minister Preston Olive said the congregation has recovered nicely as it works to improve its community outreach.

Before Katrina, attendance averaged about 220. Now, it’s less than half that. Many church members never returned to New Orleans.

“The people that are here now, they really want to be here,” Harden said. “They made an effort to come back. We all have the same purpose. We want to build the body back up again at Louisa.”

The Hollygrove Church of Christ in New Orleans sings “Don’t Do It Without Me.”

Posted by The Christian Chronicle on Sunday, August 16, 2015

MOVING BEYOND THE HURRICANE

Men, women and children dressed in their Sunday best stand under a shiny, V-shaped ceiling amid bright yellow-and-white walls — and the muck and the mildew of a decade ago seem like a long-ago nightmare.

But the memories linger, said White, now a member of the Hollygrove Church of Christ, a church planted in the aftermath of Katrina and sponsored by Carrollton Avenue.

“It’s always going to be somewhere in your mind. It’s that sore spot,” she said of Katrina. “But like I tell my kids, God allowed us to make it through, so we have to show him how grateful we are by the things that we do.”
MORE ON HURRICANE KATRINA
• 2015: Road notes: Bobby Ross Jr. on ‘The vivid faces of Katrina’

• 2015: Views: John Dobbs on ‘Bridges built and burned in Mississippi’