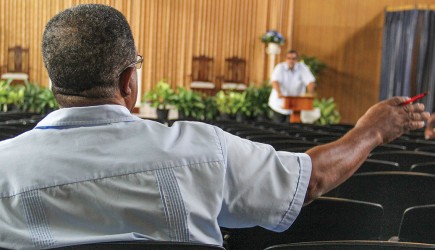 Go into all the world, with respect

Erik Tryggestad
KINGSTON, JAMAICA – There’s no Bob Marley blasting from the porch of Gladwyn Kiddoe’s home — just heartfelt gospel with a Caribbean flair.
The woman of Samaria, the woman, she left her water pot and gone …
Kiddoe, longtime director of the Jamaica School of Preaching and Biblical Studies, waves one arm in the air and holds his 3-year-old grandson, Jair, in the other as he sings along with the Mona Acappella Chorus. He yells out lyrics, and the chorus responds, flowing seamlessly from song to song.
The singers take a break as Kiddoe and his wife, Alva, serve sandwiches and juice. Before long, they’re singing again — this time an anthem by U.S. recording artists Acappella with “Jamaicanized” lyrics.
From Macedonia, the call is sounding; In Havana the people wait; The countless children in Peking, China; The thirsty souls of Port-au-Prince;

‘OUR LIMITATION — NOT GOD’S’
Back in Kingston, seven members of the preaching school’s staff gather for a meeting to discuss their plans — in Jamaica and around the world.
Jamaica, like the U.S., is in a credit crunch, Kiddoe says. The country’s money has devalued, and prices for food to feed the students is rising.
The school has lost some of its support in recent years. The North Davis Church of Christ in Arlington, Texas, oversaw the work until three years ago. Now the West Broward Church of Christ in Plantation, Fla., collects funds for the school.
Kiddoe and the staffers make regular trips to the U.S. to raise funds and encourage Jamaican churches to contribute what they can. But the director doesn’t let finances dampen his spirits as he considers the future.
A Christian family recently donated funds for construction of a multimedia studio to help the school train students worldwide.
In the 1980s, Kiddoe shared with his U.S. supporters the vision of a Church of Christ in every major city and town in Jamaica.
He remembers one church deacon who gave him “a long list of can’t do’s — where are you going to find the money? Where are you going to find the preachers?”
More than 30 years later, “I continue to marvel at how God has provided the means,” Kiddoe says. “I discovered that the limitation we place on the church is our limitation — not God’s. … God literally works with you and sends help.
“Let’s get on with it.”
FOR MORE INFORMATION, see www.jspmona.org or contact the West Broward Church of Christ at www.wbcofc.org or (954) 475-7172.