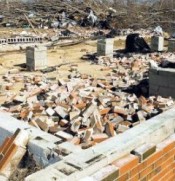 Giving thanks for survival

Melanie B. Smith
ALDRIDGE GROVE, Ala. — A mile down the road from Aldridge Grove church on Sunday morning, toppled trees yielded to buzzing chain saws, workers hammered new shingles on roofs and sightseers drove roads to witness a tornado’s wrath.
But inside the unscathed red brick church on Alabama 36 at Lawrence County 183, four dozen worshipers sang hymns with words about God’s protection: “I dare not trust the sweetest frame but wholly lean on Jesus’ name” and “In his arms he’ll take and shield thee …”
Minister James Bryant preached about heaven.
“Are you prepared for that heavenly home?” he asked. “Thinkabout it. We’ve had ample evidence that life can be taken from us in amoment.”
Bryant and others thanked God in prayers that no one in thecongregation was killed, although several had property damaged and oneman was hurt.
The preacher prayed for family and friends of the four from the community who died and for those injured and suffering loss.
Bryant called by name two who came to Christ and were baptized at the church Wednesday night. One of those was Chris Dutton, 26.

Before the service, Dutton said he just missed being inside hismobile home, which was struck and tumbled by the EF-4 tornado beforedawn Wednesday. He said he had just gotten home from work atInternational Paper when his mother phoned and asked him to come overbecause the storm was approaching.

Dutton said he normally did not heed such warnings because hethought nothing would ever happen, but “a feeling” sent him to hisparents’ house. With his parents and siblings, he stood in a bathroom,hearing the wind pick up and then roar.

He said he did not want to think about what would have happened to him if he had stayed in his mobile home.

The tornado hit homes, farms and woods within a few miles of thechurch. One house damaged was that of Sunday’s song leader, KennyAldridge. Another was the home of his son, Christopher Aldridge, which“looked like it exploded,” Kenny said before the service.

He prayed at the end, thanking God for the health of thosegathered, for sparing their church, for giving shelter and clothing andfor spiritual blessings.

Afterward, Lela Johnson said the storm damaged her roof, butvolunteers from the Moulton Fire Department had already repaired it.Other helpers have cut up five large trees that were blown down, shesaid.

Lela Johnson said her sister-in-law called to wake her up earlyWednesday and told her to leave. She did, stopping at her son’s houseon her way to a neighbor’s storm pit.

Her son, Dwight Johnson, stayed and was caught when the stormstruck his house, originally part of a barn, she said. He survivedbehind his sofa, and told a Decatur Daily reporter on Thursday that he did not have time to pray before but did after.

Lela Johnson said she was devastated seeing her house and all ofthe toppled trees, but it felt wonderful getting to be at churchSunday.

“Every morning it’s good to see the sun shine,” she said.

She recalled a terrible tornado from the past. She said hersister and her sister’s husband and their four children were killed inthe 1974 tornado that ravaged the Tennessee Valley.

The preacher told his congregation that someone reportedfinding one of his 500 sermons blown from the church’s demolishedparsonage in the parking lot of 3M in Decatur.

Bryant and his wife, Shirley, said they did not live in the house during the week but used it on weekends.

The preacher said he lost the sermons plus several Bibles and 30years of Bible-study material. Shirley Bryant said she lost most of hershoes. She said she was especially sad about losing her grandmother’srings, necklaces and pins.

After he preached, Bryant reminded his congregation that stew would be served that day.

The food brought in by members, at least 10 churches and otherswas feeding victims and volunteers, said church secretary and mealcoordinator Elizabeth Henderson. She was spending her 64th birthdaysending out helpers to deliver meals, accepting donations and makingsure that crocks of stew were hot.

“Doing this makes me happy on my birthday,” she said.

On his way out, Dutton said fear made him realize it was time to turn to God.

“He showed me his power.”