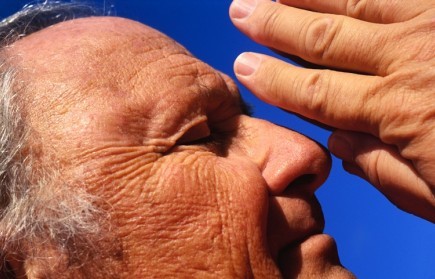 W. Winston Skinner
COWETA, Ga. — A group of Cowetans have been praying for rain since the new year began.
Late this week, as precipitation fell softly across the county and soaked into the dry ground, participants in that group had an answer for why the wet weather has arrived. “Prayer works,” said Roland Gagnon, outreach minister at the Newnan, Ga., church.
Gagnon and Ryan Gray, the church’s associate minister, have been coordinating prayer meetings for rain since the first week in January. “We believe that God answers prayer,” Gray said.
“All the rain we have received so far this year is not coincidence as some might think. Rather, we believe, it is divine intervention,” Gagnon said.
Rain fell throughout the county on Thursday and Friday. A rain gauge on LaGrange Street just south of downtown Newnan showed 2.75 inches of rain from Thursday through Friday afternoon.
The Times-Herald’s weather station on Jefferson Street downtown recorded a lesser but still substantial amount. The records showed .98 inch of rain Thursday and .76 inch of rain since midnight on Friday as of 4 p.m. Rainfall for the month during the same period was 4.09 inches.
Prayer meetings are continuing at Newnan church — located at 2675 Highway 34 East — each Wednesday. There is a midday service at noon and another service at 6 p.m.
Gagnon said the meetings have been going well, though attendance has not been huge. He said he thinks many people remain reluctant to worship in a church of a different denomination.
“The numbers aren’t big,” he said.
Gray said the prayer meetings will continue “each and every Wednesday… until the drought is officially declared over.”
“This is not about denominations or doctrines,” Gagnon said. “It is just about prayer.”
Gray urged people who “believe in the power of prayer” to join the group of praying folk. “People of all faiths are welcome to this time of prayer,” he added.
Several denominations have been represented at the prayer meetings on Wednesday. Baptist minister Joshua Hickman has attended some of the services and has been talking with Gagnon and Gray about his concerns relating to the Christian responsibility to use water wisely and conserve it whenever possible.
Hickman said he was struck with the Christian responsibility to conserve water after hearing a sermon by Dr. Robert Walker at Peachtree Baptist Church, the oldest Baptist church in Atlanta.
Hickman reflected on the ways water is used in the Bible to describe refreshment both physically and spiritually. Conserving it is “just right,” Hickman said. “It’s Christian.”
Hickman said it “would be great to have a group of people come together” to address water conservation from a spiritual standpoint. He, Gagnon and Gray have been exploring options in that direction for the future.
For now, however, the pray-ers for rain are simply rejoicing. “We praise God for the rain He has given us,” Gray said. “We give Him all the glory.”