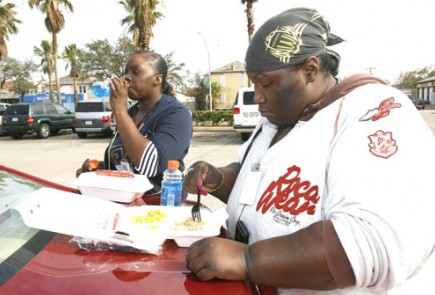 Galveston’s ‘church for the homeless’ worries about its mission, members

Staff Reports
Allen Isbell sat in a chair at his sister’s home, 265 miles from his house, and worried.
Not really about his residence in Galveston behind the seawall on 35th street, which has withstood several hurricanes since 1916, but rather about those in the city who didn’t have a home even before Hurricane Ike struck the island.
Isbell, minister of the 100-member Broadway church in Galveston, knows their names, their voices, their stories – even while he’s unsure where many bed down each night. The congregation serves almost as many homeless Galvestonians each Sunday as it has members, with 70 or so participating in weekly Bible class and worship, then accepting a sack meal with enough food for that day.
“When the mandatory evacuation order came, they were taken off the island. Well, I should say as many as would go,” said Isbell, a practicing trial attorney who has preached without accepting a paycheck from the Broadway church since 1977. “As for how many stayed and whether they’re safe, we don’t know.
“I’ve been in touch with or heard about every member except one, but we are all deeply concerned. Our congregation is a church for the homeless.”
When Ike made landfall on the barrier island on Saturday, the massive, Category 2 hurricane was especially unkind to Churches of Christ. Many members’ homes in the storm’s broad path were damaged or destroyed by flooding and high winds. Millions are still without electricity. Church buildings — usually a haven in times of distress — fared no better, with widespread flood damage, exterior or structural problems and loss of electricity.
During the worst of the flooding, 5 feet of water surged into the Broadway church’s auditorium. Isbell thinks that’s only the beginning of the scene they’ll face once they return to the still-uninhabitable island. Isbell said members on the West End of the island – four families in particular – faced extensive if not absolute destruction of their homes.
The congregation is comprised mostly of retirees and college students who attend Galveston College, the University of Texas Medical Branch or Texas A&M University at Galveston.
Young families or individuals in their 30s or 40s are rare on the island because of the high cost of land, Isbell said.
“The makeup of the population of Galveston is that you have the super rich, which are the old families who were there from the beginning, and the very poor. You don’t have middle class people as a rule.”
The homeless population is a primary mission for the church because of the sheer number of indigents on the island, Isbell said, citing the access to free medical care at the teaching hospital as a draw for many.
“Some of them are very intelligent and very Bible-oriented,” Isbell said. “Either due to economics or mental illness or drugs or something like that, they end up on the streets. But you can’t classify them as any one type. It has been a real education for me working in this ministry.”
In addition, the congregation supports a full-time prison minister who divides his time between the county jail and other correctional facilities within driving distance.
The Broadway church’s ministries are essential to the island, Isbell said. Working with the poor and the prisoners gives them a sense of purpose in a coastal area that is seen by outsiders not as a home so much as a vacation destination.
“Our members are deeply dedicated to serving those who live here, and this will be a real opportunity, and a challenge for us,” he said. “Things don’t bother me. Damage to the building doesn’t bother me, except that it hinders us from being the lighthouse people know us as.”