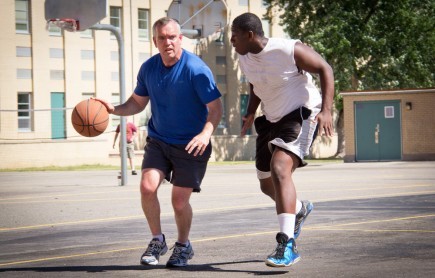 Future of the church

Bobby Ross Jr.
DENVER — The campers brought swim trunks, basketballs and Bibles.
They cheered on the Colorado Rockies baseball team at Coors Field and toured Invesco Field at Mile High, home of football’s Denver Broncos.
They grilled burgers and praised God against the backdrop of Denver’s bright lights and the Rocky Mountains’ snow-capped peaks.
Yet this weeklong experience qualifies as no ordinary church camp — evidenced by the dress shirts and ties that participants must wear each weekday, along with suit jackets on Sunday.
Welcome to the Bear Valley Church of Christ’s Future Preachers Training Camp, an annual summer event designed to “fan the flame for preaching” among young men ages 13 to 18.
“It’s just a great way to learn more from the Scriptures and to be around these young men for a whole week, doing nothing but studying the Bible and learning how to present God’s Word more effectively,” said Alex Warnes, 20, a camp counselor and student at Bear Valley Bible Institute of Denver, a preacher training school associated with the 350-member church.
THE ‘FUTURE’ IS NOW
The 39 campers from 12 states slept on cots and sleeping bags at the church.
They learned terms such as “exegesis,” the critical explanation of a text, and “homiletics,” the art of preaching.
They spent long hours in the Bear Valley library poring over assigned passages. They used pens and pencils — not keyboards — to write out six- to eight-minute sermons.
“There are not as many preachers out there today. God put me here to preach and spread the Word,” said Matt Dove, 15, a member of the Lake Norman Church of Christ in Huntersville, N.C.
Dove boarded his first flight to attend the Bear Valley camp. He titled his first sermon “The Extreme Makeover” and preached on the role of baptism.
“I was happy about it, but I’m not the best public speaker,” he said. “I think I could have done a better job, but I did all right. It was my first time up in front of that many people.”
That Friday, all 39 campers preached — one right after the other.
“You want to have several Cokes ready during the breaks,” joked David Sanders, 15, a member of the Brown Street Church of Christ in Waxahachie, Texas.
Sanders spoke on “Can We Neglect Our Great Salvation?” He described his life as a mess before his exposure to preacher training camp.
“I had made a lot of bad decisions,” the third-year camper said. But his teachers and fellow campers helped him turn his life around.
“It made me realize what I was missing out on,” he said. “Because I thought (Christianity) was just something, you know, you get baptized, and then you eat the cracker, you drink the grape juice, and that’s the end of it. But it’s not.”
For years, church member DeAnn Wilkie prepared the meals.
But when she couldn’t make it, Kathy Pollard, Sheryl Turner and Lee Hanstein stepped in to make favorites such as fried chicken, chili dogs and chicken quesadillas.
The “camp moms” praised the teens’ servant attitudes and dedication to God.
“We need to take the ‘future’ out of Future Preachers Training Camp because these young men are already preachers,” said Pollard, wife of Bear Valley minister Neal Pollard, the camp’s director.

NEXT GENERATION OF PREACHERS
More than a dozen years old, the Bear Valley camp traces its roots to a minister training camp started by the Pennington Bend Church of Christ in Nashville, Tenn., roughly 40 years ago.
Across the nation, other congregations that host such camps include the North MacArthur Church of Christ in Oklahoma City, the Washington Avenue Church of Christ in Evansville, Ind., the Lewisville Church of Christ in Texas and the Graymere Church of Christ in Columbia, Tenn.
Before moving to Denver in 2006, Neal Pollard oversaw a Christian camp in Virginia for about a decade.
“I loved that,” Pollard said of Camp Idlewild. “But it’s much different from here because it’s an outdoors, traditional Bible camp. You have, a lot of times, the boy/girl drama that goes on during the week. You don’t have that here. There’s a little less distraction.”
A few years ago, though, Bear Valley began incorporating a few activities — such as the Rockies game and the cookout — that involve other Christian teens, he said.
Girls, in other words.
“But, by and large, it’s a concentrated week for these young men to be together … to see that preachers are normal,” Pollard said.
“You can’t help but just be encouraged and optimistic when you see these guys and how well-rounded they are,” he added. “They’re ballplayers. They’re articulate. They’re smart. They’re sociable. And so they’re not wallflowers or awkward, backward boys that can’t do anything else.”
Darrick Shepherd, minister of the Old Main Street Church of Christ in Newton, Kan., helped his uncle Roger Shepherd start the Bear Valley camp. The 30-year-old preacher remains active in mentoring campers.
“I have a desire to take young men … and help them and mold them and shape them into hopefully becoming preachers,” Shepherd said.
Shepherd leads a nightly “spoken English” routine where campers must talk off the cuff about any given subject.
“That helps them to overcome their stage fright,” Neal Pollard said. “It’s rewarding to see the change in a week. It’s also rewarding to see … guys who either go to a Christian college or a school of preaching and become preachers because of the seeds planted here.”
Of course, not all the campers aspire to become preachers. But all desire to serve as church leaders, said Brett Petrillo, Bear Valley’s youth minister.
While different from Bible camp, Petrillo said, “what makes preacher training camp the same is that on-fire feeling that you get at the end.”
Take Armand Wine, for example.
“I really like what I see,” said Wine, 15, a member of the Chesapeake Church of Christ in Virginia. “I think we’re building a strong generation of preachers.”
Wine came to Denver from Knoxville, Tenn., where he attended an East Tennessee School of Preaching camp.
Also on the high school junior’s summer agenda: camps at the Memphis School of Preaching and Freed-Hardeman University, both in Tennessee.
“I want to learn more about the Word. I don’t necessarily want to be a preacher, but I want to learn how to preach the Gospel,” said Wine, who is interested in youth ministry. “You don’t have to be a pulpit preacher to preach the Gospel. We need all the people out in the field preaching, too.”