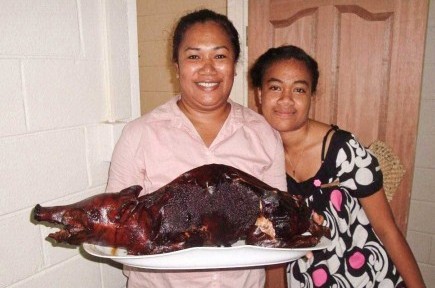 From Tonga to Banana Village

Erik Tryggestad
It took nearly seven years of planning, prayer and perseverance for the Nuku’alofa church on the island of Tonga to complete its first building.
So it seemed almost appropriate that a cyclone delayed the building’s dedication.
“The cyclone hit in the small hours of Sunday morning and tore roofs off buildings, sunk small boats in the harbor and fell huge trees and power lines, cutting the power supply for 18 hours,” said Steve Raine, an elder of the Otumoetai church in Tauranga, New Zealand, who traveled to Tonga for the event.
The new building escaped the storm unscathed, so church members met on Monday for the dedication. The Arlington church in Riverside, Calif., donated funds to help the Tongan church members build the facility.
Overseeing the land purchase and construction were Taniela Fukofuka and Alani None, both graduates of the South Pacific Bible College in Tauranga, where Raine serves as principal.
Tongan church members “have repeatedly encountered resistance from potential converts when they learn the church meets in a house,” Raine said. “In Tongan culture, it is extremely important to have a building in order to be seen as a ‘credible’ church.”
As the Tongans celebrated their new building, church members on another South Pacific island focused on building strong marriages.
Randy English, a missionary based in Pago Pago, American Samoa, led a small team to Christmas Island in the Republic of Kiribati, about 1,500 miles north of Tonga. The team worked with the Banana Village church, conducting a marriage seminar and Bible classes.
“Pacific islanders have hearts that can be reached with the challenge of God’s word for obedience, growth and greater faith,” English said. “It was very encouraging to have the excellent questions and good response during the men’s and women’s training classes.”
The Banana Village church is growing and hopes to build a new meeting place soon, English said. Tavita Teetan preaches for the church, which is led by several dedicated Christians, the missionary added.
English and a team of 11 church members from Alabama, Tennessee and Arkansas plan to visit Christmas Island this summer to conduct additional classes and Bible studies.
“Although our team size is limited by the small charter aircraft that is currently flying to this remote island, we feel that this particular team will be able to accomplish a wide range of teaching, preaching and follow-up,” English said.