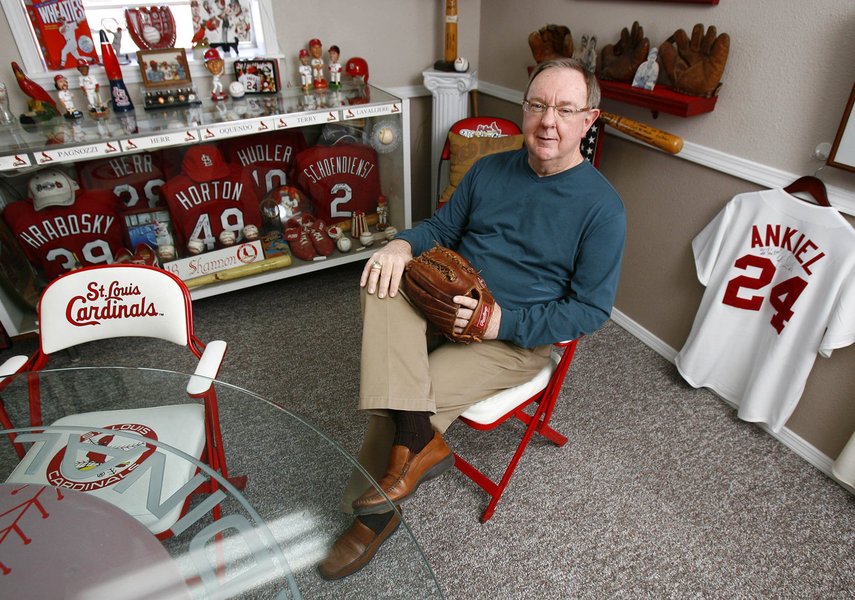 From the pulpit to the dugout

An Oklahoma minister attends the St. Louis Cardinals’ fantasy baseball camp each year, to play and to pray.

Bobby Ross Jr.
Editor-in-Chief
JUPITER, Fla. — After a performance praised by former baseball manager Whitey Herzog, the hotshot center fielder brushed off fans as he left the field at the St. Louis Cardinals’ spring training complex.
“I can’t sign right now,” he proclaimed. “I’m sorry.”
Then No. 14 burst out laughing at his own joke.
Minister Terry Rush of Tulsa, Okla., swings a 34-inch Louisville Slugger and believes in a mighty God.
Although he had to wear bifocals that he said turn every pitch into a “bump ball,” the senior minister of the Memorial Drive Church of Christ had just raised his batting average to .333 at the Cardinals’ recent Legends Camp.
Named after the late Terry Moore, the captain of St. Louis’ 1942 and 1946 world championship teams, Rush, 60, is a lifelong Redbird fanatic and a 25-year veteran of the club’s fantasy baseball camps.
As much as he enjoys putting on the white home jersey of his Cardinals and lacing up his red, size 9 rubber cleats, Rush returns each winter not for the sweet smell of leather, grass and infield dirt, but for the opportunity to minister.
Rick Horton, who organizes Legends Camp, said, “There’s a ministry everywhere you go in life, and Terry understands that every relationship you have is somebody you can care about and be concerned about and help.” Horton, a Cardinals broadcaster and former reliever, also directs the St. Louis-area Fellowship of Christian Athletes.
Rush said the 500-member congregation where he has preached since 1977 pays his way to Legends Camp as a mission trip. The 2008 cost, including room and board, equipment and instruction by former major leaguers: $3,995.
“At first, even close friends said, ‘You’re only going because you love to play ball,’” he said. “But I knew what I was doing. And then we started having baptisms, and we started seeing impossible things happen.”
At one of his first camps, Rush met Curt Flood, a retired Cardinals outfielder who won seven Gold Gloves in the 1960s.
After Flood asked Rush to pray for his mother, children at the Tulsa church made her two tissue boxes full of birthday cards. She “adopted” Rush, as did her son. When Flood died in 1997, Rush and Jesse Jackson preached at his funeral.
In 1992, Rush was invited to deliver a “Sermon on the Mound” at the Field of Dreams baseball diamond in Dyersville, Iowa. The sermon was filmed for an ESPN documentary. The only drawback for Rush: He had to wear a White Sox uniform.
Another fruit of Rush’s Cardinals ministry came after the death of the veteran St. Louis broadcaster Jack Buck in 2002. At the urging of Buck’s widow, Carole, Rush wrote a book, “Voice of Silver, Heart of Gold,” which he described as “loaded with God-isms.” The club gave away 20,000 copies at its Fan Appreciation Day in September 2003.
Rush was one of 95 campers, divided into eight teams, who played Legends Camp games on the fields where the Cardinals have spring training.
Among the obvious differences from real major-leaguers: the pudgy bellies, the gray beards, the four outfielders, the routine throws that regularly hop over first base and the occasional pinch runners — for the batter.
Rush’s preacher status affords him respect, but not immunity from the constant, good-natured ribbing among teammates.
As Rush visited with a reporter from The Christian Chronicle outside the dugout, he reached up and grabbed a foul ball that sailed his way.  “That’s the first ball he’s caught all year!” teased Cal Eldred, a former Cardinals pitcher who coached Rush’s team with the club’s third-base coach, Jose Oquendo.
After the game, a player on the opposing team complained about an umpire’s call and asked with a smile, “Terry Rush, did you threaten him with eternal damnation?”
Be it a conversation in the dugout or an after-game trip to a bar (Rush never orders anything stronger than Diet Coke), the minister said he looks for opportunities to tell his teammates and baseball heroes about Jesus. But he’s far from obnoxious about sharing his faith.
“He don’t act like a preacher,” said Herzog, who managed the Cardinals to the 1982 World Series title. “I mean, he’s an awful nice fellow, but when he’s down here and he’s got that uniform on, he’s a baseball player.”

GODDARD, Kan. — It’s a picture-perfect afternoon for baseball as…