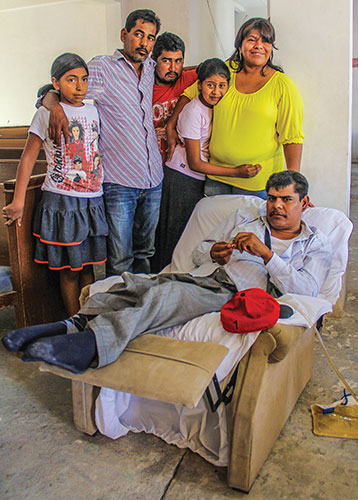 From the cartel to Christ

In the midst of Mexico's drug war, a bullet nearly ended the life of former gangster Sixto Jesús Meza — and helped him find God.

REYNOSA, Mexico — A well-worn, beige recliner sits between rows of wooden pews at the Balcones de Alcala Church of Christ.

For Sixto Jesús Meza, it is a Mercy Seat — a reminder of God’s love and forgiveness.
For the 80 Christians who worship alongside him, it is proof that no one is beyond redemption.
On a Sunday afternoon, Meza arrived at the church building in his wheelchair and quickly pulled himself onto the recliner. He and a handful of the church’s members spoke with Christians from north of the border who support their work. Gilbert Galdiano, minister for a bilingual Church of Christ in Alton, Texas, translated for the English-speaking guests.
Asked to share his story, Meza began — and the room fell silent.
He used to be part of the problem here on the U.S.-Mexico border. For nearly seven years, Meza worked for a drug cartel in Matamoros, just south of Brownsville, Texas.
What did he do for the cartel?
“Everything,” he replied — and declined to say more.
Since 2006, when the Mexican government intensified its war on drugs, clashes between the Mexican military and the heavily armed cartels have resulted in at least 60,000 deaths, according to the Mexican government. Critics claim the number is much higher.
Meza almost was part of that number. One night, in 2012, police surrounded his van and began firing. He fled — and felt a bullet tear into his back. Face-down on the street, unable to move, he heard soldiers speaking above him. They thought he was dead.
“I asked God for another opportunity,” Meza said, “another chance to see my kids, to see them grow up.” 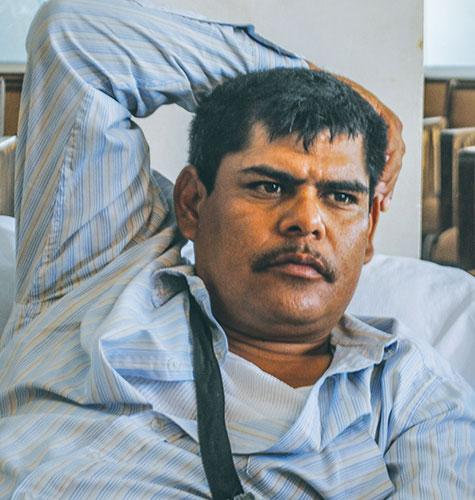 “I don’t work for the cartel anymore. I work for God. I work for the one who moves the whole universe,” says Sixto Jesús Meza. (PHOTO BY LYNN McMILLON)
The bullet severed his spinal cord, paralyzing him from the waist down.
Doctors told his sister, Cira, that he likely would die in three months or less. She refused to believe it.
“I trust in God,” she told them. “My brother is going to live.”
She moved Meza into her home in Reynosa to take care of him — and to talk to him about Jesus. One day, while she was away, members of the Balcones church knocked on their door.
At first, they thought no one was home, said Leopoldo Arvisu, one of the door-knockers. Unable to move, Meza yelled for them to enter. He listened to them talk about salvation but refused their invitation to church because he couldn’t get there.
It’s OK, the church members told him. We’ll come and get you. Weeks later, after Bible studies and prayer, Meza and his sister were baptized.
Physically, he’s far from healed. He needs an operation to fuse his spine for stability. He’s suffered setbacks, including a recent infection. The Church of Christ North in Pharr, Texas, which helps support the Balcones church, has agreed to help with medical expenses.
Meanwhile, Meza stays faithful  and busy, distributing brochures that tell of God’s salvation. He shares his faith with those who will listen.
“I don’t work for the cartel anymore,” he said. “I work for God. I work for the one who moves the whole universe.”
Arvisu, who knocked on Meza’s door, is a graduate of the Monterrey School of Preaching and now ministers for a church plant in Reynosa’s Rincon de Las Flores neighborhood.
Asked how it feels to see Meza sitting at church, Arvisu gave a one-word answer — “happiness.” 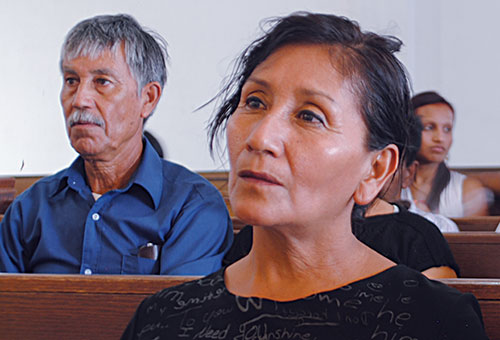 Socorro “Corro” Barrios listens to a group of visitors at the Balcones de Alcala Church of Christ. (PHOTO BY LYNN McMILLON)
“His story didn’t start with me,” Arvisu said, humbly. God already was at work in Meza’s life, and he was seeking. “He was in a state of death, and now we see him in another state — a lot better than before.”
Socorro Barrios is the widow of the Balcones church’s former minister, Jesús Barrios, who died from cancer in 2009. Now their son, Alejandro, serves as minister.
Seeing God’s mercy in Meza’s life has renewed her zeal to seek and save the lost, she said.
“He has taught us that some hearts are hard,” she said, “but be patient.”

Filed under: Headlines - Secondary International News One Nación Under God