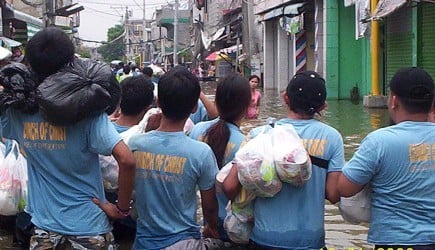 From Pago Pago to Atlanta, churches cope with natural disasters

Erik Tryggestad
Though half a world apart from each other, the people of north Georgia and the Philippines both are coping with the aftermath of devastating floods.
As Churches of Christ responded to both crises, a new disaster struck — a tsunami in the South Pacific.
AMERICAN SAMOA: Tsunami kills more than 100
A magnitude 8.0 earthquake off the coast of the Samoan islands Tuesday, Sept. 29, generated a tsunami with waves 15 to 20 feet high, according to the Associated Press. At least 111 people were confirmed killed Wednesday in the nation of Samoa, neighboring American Samoa and the island of Tonga.
“Everything shook for what seemed like a long time,” said David Willis, a missionary in Tafuna, American Samoa, who felt the earthquake during breakfast Tuesday. The missionary said he and his family are safe and are contacting other members of the Tafuna church.
Randy English, a missionary in American Samoa’s capital, Pago Pago, had just returned to the U.S. — after a mission trip to Guadalcanal in the Solomon Islands — when the earthquake struck. English was working on his computer to update a gospel radio program that broadcasts through radio station KULA in American Samoa.
“All of a sudden our EAS (Emergency Alert System) flashed up an alert notice,” English said. The missionary called church member Rocco Pierce in American Samoa for updates.
“Although there was very little time between the earthquake and the time that the tsunami actually struck our island, there was enough time for EAS alerts to be received and then sent out through our station to the people residing in American Samoa,” English said. “Many people were able to get to higher ground, but still there were those who did not have access to the warnings.”
Video of the tsunami’s aftermath in American Samoa shows overturned cars and homes reduced to matchsticks.
“At this time it appears that members of the church in American Samoa are OK,” English said. “We do not have any update on members of the church in Samoa, but we hope to obtain that soon.”
Those interested in contributing to relief efforts can send funds to English’s supporting congregation, the Forest Park, Ga., church:
Forest Park Church of Christ
P.O. Box 1405
Forest Park, GA 30298
PHILIPPINES: Typhoon brings killer floods
Three days before the tsunami, Typhoon Ondoy swept across the islands of the Philippines, inundating the capital, Manila, in a matter of hours, according to news reports.
“As I write this, many families in Manila are perched on top of rooftops waiting for rescue,” said church member Chito Cusi in a Sept. 26 e-mail. “Everything is at a standstill — and people are suffering and in a panic situation.”
“My nephews were able to commandeer a rubber boat to rescue my sister’s in-laws, who were stranded in the third floor of their apartment building,” Cusi added. “Along the way, they rescued as many people as they could.”
Bonifacio Patricio and fellow church members are attempting to deliver relief supplies to families cut off from main roads. Patricio listed five Churches of Christ that were impacted by the floodwaters. Some members were evacuated. Others are missing. Patricio expects the list of affected churches to grow.
At least 246 people died in the floods, according to the National Disaster Coordinating Council. In addition, the typhoon destroyed more than 180,000 tons of rice in the impoverished nation, the Philippines agriculture department said.
Texas-based Rapha International, a church-supported relief ministry, is assisting Cusi and Filipino churches as they provide relief. For more information, see www.raphainternational.org.
Checks marked for “Manila Relief” may be sent to:
Rapha International
402 Blue Smoke Ct. W
Fort Worth, TX 76105
GEORGIA: Record rainfall causes severe floods
After years of drought conditions in the Southeast, Georgia received record rainfall in late September. Floods destroyed homes in parts of the state’s south-central region, the northwest (near Chattanooga, Tenn.) and metro Atlanta. At least eight people died in the floodwaters, according to CNN, and total damages are estimated at $250 million.
Nashville, Tenn.-based Churches of Christ Disaster Relief effort sent two truckloads of relief, including food, cleaning supplies, baby supplies, water and linens, to Mableton, Ga. The organization also sent supplies to the Rossville, Ga., Church of Christ, near the Tennessee border. For more information, see www.disasterreliefeffort.org.
The flood “has affected thousands, filling their homes with muck and many with raw sewage,” said Laura Cremeans of Churches of Christ Disaster Response Team. The West Melbourne, Fla.-based ministry will work with congregations in the Douglasville, Austell and Powder Springs areas as they “reach out to their members and community teaching the love of Jesus by example,” Cremeans said.
The ministry requests volunteers and funds. For more information, see www.churchesofchristdrt.org.