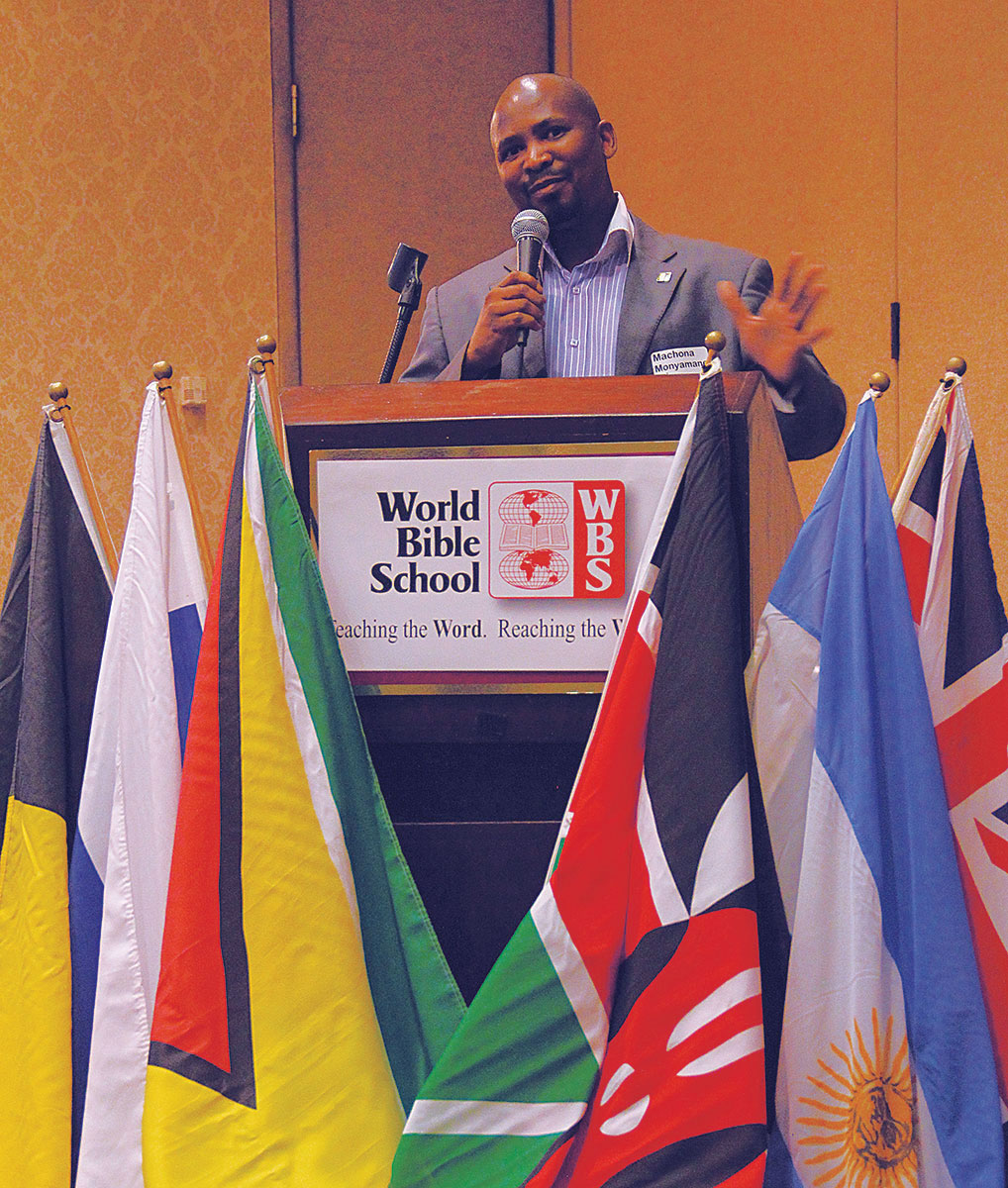 From communism to Christ

Erik Tryggestad
President and CEO
OKLAHOMA CITY — “I never liked church. … It was a symbol of the system that oppressed us.”
That was Machona Monyamane’s view during the harsh years of apartheid, the institutionalized system of racial segregation in his homeland, South Africa.
He has since changed his view of church — and has helped plant congregations and baptized untold numbers of his countrymen. Monyamane spoke about his journey of faith at a recent Oklahoma benefit dinner for World Bible School, the Texas-based ministry he credits with introducing him to Bible-based Christianity.
A former communist sympathizer, Monyamane enrolled in World Bible School’s correspondence ministry not to gain a relationship with his creator but to gain ammunition to use against South African Christians in debates.
His teacher, a church member in Chattanooga, Tenn., patiently “answered my stupid questions,” Monyamane said. After months of back-and-forth correspondence, the teacher asked Monyamane to get in contact with a South African preacher who would give him additional books on Christianity and answer any questions he had.
The minister’s name: George Funk.
Monyamane knew immediately he was white — one of the oppressors.
Nonetheless, he found the courage to call Funk and set up a meeting for May 18, 1996.
“We talked for two hours,” Monyamane said. Every time he asked Funk a question, the minister “put a smile on his face and a finger on the passage” in the Bible.
After the discussion, Monyamane decided to leave communism behind and become a Christian. Funk found a nearby swimming pool but couldn’t find its owner. The minister decided to jump the fence, baptize Monyamane and, if necessary, beg the owner’s pardon.
In the years since, Monyamane has performed hundreds, possibly thousands, of baptisms among his countrymen, said John Reese, World Bible School’s president.
Monyamane ministers for the Seeiso Street Church of Christ in Pretoria, South Africa, and serves on the board of trustees of African Christian College in neighboring Swaziland. Currently, he’s studying marriage and family therapy at Harding University in Searcy, Ark.
Sibusiso Ngubeni, worship leader for the Meadowlands Church of Christ in Johannesburg, South Africa, said Monyamane “has been a great inspiration to us all who have since taken up the cross — through his blessing in dynamic preaching and delivery of the Word.”
At the benefit dinner, Monyamane thanked Christians in the U.S. for sacrificing their funds and their time to teach students around the globe through WBS.
Now “we’re serving Christ together,” he said, noting the Great Commission delivered by Jesus in Matthew 28: “Therefore go and make disciples of all nations, baptizing them in the name of the Father and of the Son and of the Holy Spirit, and teaching them to obey everything I have commanded you.”
Though Jesus was specific in what his followers should do, he didn’t specify how to do it, Monyamane said, adding that “WBS is one way to go.”
When it comes to taking the Gospel to the world, Jesus “didn’t give instructions in black and white.”