LOS ANGELES — Just down the street from a Hare Krishna temple and a few blocks from a large mosque, Christians worship each Sunday in English, Chinese, Spanish and Korean.

The Culver Palms Church of Christ, one of the nation’s most diverse congregations, sits at the intersection of motion picture studios and apartment buildings housing immigrants from all over the world.

At Culver Palms, Angela Manassee coordinates the outreach effort, which she said helps church members interact with immigrants and expose them to Jesus.

“A lot of people are just newly on the scene and struggling with the language, trying to improve (their English skills) so that they can improve their work situation,” said Manassee, wife of Culver Palms senior minister Mark Manassee.

At the same time, the program connects church members with unchurched neighbors in a casual, non-threatening setting, she said.

FriendSpeak started when American mission workers — enthusiastic about Let’s Start Talking’s international success — asked why the simple approach of one-on-one English instruction using the Bible could not be tried at home.

“It’s the same strategy,” said Ben Woodward, director of FriendSpeak, a nonprofit organization based in Bedford, Texas. “We just have to adapt a little bit for a longer-term approach here.”

While FriendSpeak emerged in the early 1990s, most of the domestic ministry’s growth has occurred in the past five to seven years, said Woodward, the German-born son of missionaries Mark and Sherrylee Woodward, who founded Let’s Start Talking about 30 years ago.

“Our churches have really awakened to the fact that the demographics around them have changed, that the communities around them are different,” said Woodward, referring to the nation’s increasing ethnic and religious diversity. “Churches now realize this, and they’re being proactive about it.”

“My best estimate is that somewhere between 275 and 300 churches are using FriendSpeak,” Woodward said.

“Her English wasn’t great, so I recommended she get help through our FriendSpeak ministry,” said Dabbs, a former missionary to Brazil who speaks Portuguese. “She came back Sunday evening and got plugged in. She’s learning English and learning about the Lord.”

Dozens of immigrants, mainly Chinese, study English — and the Bible — with FriendSpeak volunteers at Prestoncrest each week, regularly resulting in souls converted to Christ, Dabbs said.

Prestoncrest member Bob McAfee, a FriendSpeak volunteer for about seven years, tells the story of a young woman and her mother — both natives of Colombia — who were baptized as a result of the ministry.

The “arranged marriage,” as McAfee describes it, came after he and his wife, Amy, invited Bivi and her mother to a large group luncheon at their house.

“My wife insisted we leave the chair next to Bivi open for our son (Landon),” McAfee said. “He arrived a couple of minutes late and took the only seat left — next to Bivi. Amy and I had no idea what the outcome would be. It turned out, about three years later, to be a wedding.”

Bivi McAfee, a second-grade bilingual teacher, now volunteers with FriendSpeak. Recently, she studied with a Muslim woman from Iran while her father-in-law worked with the woman’s husband.

“How blessed could a person hope to be?” Bob McAfee said. “I’ve reached the pinnacle.”

Power of the Word

“The program is a great way for those who enjoy meeting new people and learning about other cultures to use their talents,” Johnson said.

“We have met so many from numerous places, and our church family is a warm and friendly group for these newcomers. We know we are seed planters and are willing to wait for God to give the increase.”

Evelyn Davis, a member of the Grapevine Church of Christ in Texas, developed a close relationship with a young Japanese woman. At first, the FriendSpeak student expressed an interest only in vocabulary, word usage and conversation skills.

But near the end of the study, the woman began asking more questions about biblical content.

“As she read the last lesson — about the resurrection and ascension — she sat back and said, ‘What a story; I never heard the whole story. I will have to read my Bible now,’” Davis said. “It was such a faith-building experience for me to see the power of the Word.”

Noreen Bryant’s first exposure to FriendSpeak came 15 years ago as a member of the Heritage Church of Christ in Clawson, Mich.

“I will never forget how wonderfully it enabled me to build relationships with a few different reading partners — one from Bolivia, one from Armenia and one from China,” said Bryant, who now lives in Virginia.

“Reading together from the Bible made it easy to move away from small talk into substantive discussions together about life and faith.

“It was so natural and easy to connect on a heart level as we read the life of Jesus and discussed the questions together.”

The FriendSpeak ministry of the Church of Christ Student Center at Arkansas Tech University in Russellville, Ark., introduced a Taiwanese student named RuRu to Jesus.

“I learned about Jesus, God and the Bible,” RuRu, now back home and attending a house church, said in an e-mail to her teacher, Craig Davis, the center’s missions and international student coordinator.

“Praise be to the Lord,” RuRu said, “for he shows his wonderful love to me when I am … everywhere.”

“The goal, as the name says, is just to be a friend,” said church member Dean Shaw, studying with a Buddhist teenager from Tibet. “So it’s made it easier to minister because there’s no pressure.”

Using a FriendSpeak workbook as a starting point, Shaw reads one-on-one with the teen and shares simple stories from the Gospel of Luke. But over time, Shaw said, “you talk about deeper things … and you develop a friendship.”

Sometimes, those friendships lead to conversions.

“The Word speaks for itself, and we’re reading through the Word,” Angela Manassee said. “We can share our life, but we don’t need to come on strong, because the Word really illustrates it. It really does.

“We are the illustration of what it means to be a Christian,” she added. “So, in that whole process of becoming friends and helping them in their life improve an area, I think the Word really does it all.” 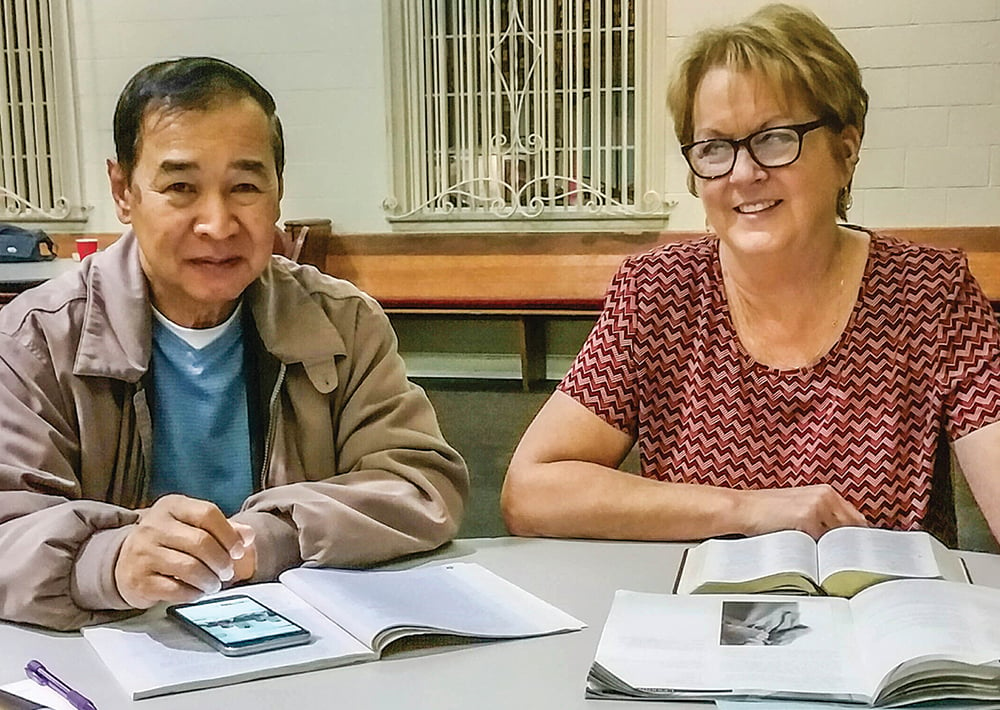 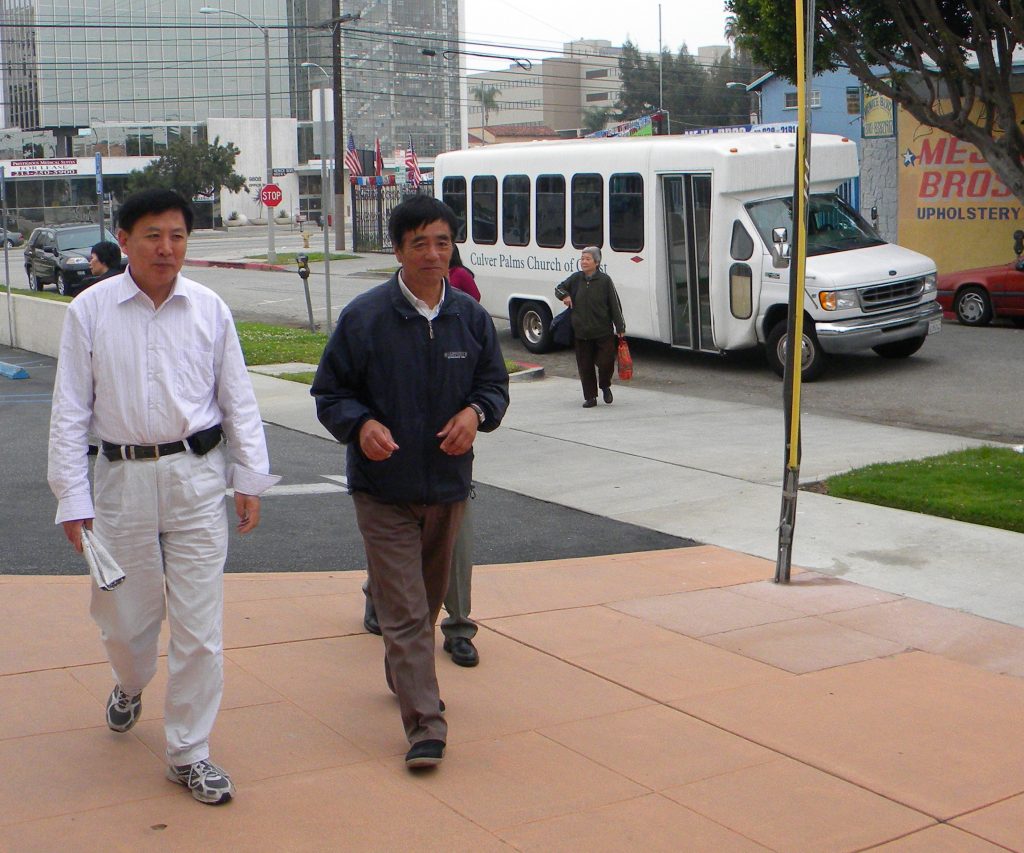 Chinese-speaking members arrive for worship with the Culver Palms Church… 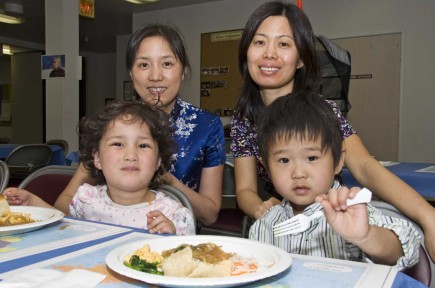 The believers who meet at the Culver Palms Church of…