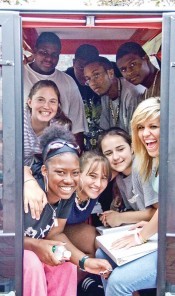 Members, visitors long distances to worship with a South Jersey congregation that emphasizes a family atmosphere and development of God-given talents. This church defies the notion that numerical growth can’t occur in the Northeast.

Just ask her electrician.
Troy Spencer was working in the laundry room of Dwight and Mary Lea Thompson’s home when he heard singing in the kitchen.
Because he lives, I can face tomorrow. Because he lives, all fear is gone.
“Wow, I haven’t heard that in a while,” Spencer said.
With that simple remark, Mary Lea sensed an opening.
“You’ve heard that before?” she said pleasantly, inquiring about the young man’s background and why he no longer attended any church.
Before he knew it, Spencer was sharing his life story.

The Pitman Church of Christ is a growing congregation about 20 minutes south of downtown Philadelphia, on the New Jersey side of the Delaware River.
The 300-member church practices what its longtime evangelist, Dan Cooper, and his wife, Katherine, call “friendship evangelism.”
Nobody practices it better than elder Dwight Thompson and his wife, Mary Lea, who keep converting friends and neighbors despite living 23 miles from the church building.
“Mary Lea has been instrumental in bringing more people to the church than probably any other one person,” Katherine Cooper said.
Mary Lea gives all the credit to the Holy Spirit: “Whatever I was able to do was always because God’s spirit touched me.”

Far from the Bible Belt — in a state with 8.7 million residents but only 39 Churches of Christ — the Pitman church has more than doubled in size since 1984.
It’s a “freeway church,” as Dan Cooper describes it, drawing many members from 30 to 40 miles away.
“People will ask, ‘Well, why do you go that far?’” elder Larry Point said. “And the answer is, ‘Because the truth is taught there.’”
Racially, the church is about 65 percent white, 30 percent black and 5 percent other ethnicities.
“It’s just amazing how so many different people, really different, just make up a family,” said Phyllis Walker, a 40-year member who remembers a time when blacks like her were not welcomed.
The diverse backgrounds can be seen in the leadership: Just one of the six elders — Dwight Thompson — grew up in the Church of Christ.
Family life minister Steve Sikes, who shares preaching duties with Cooper, believes the congregation’s diversity contributes to its unity.
“This group of men can get in a meeting and disagree with one another but do it in love,” Sikes said of the elders.
Despite the long driving distances, the church stresses close connections — through Sunday night small-group meetings at homes and Wednesday night fellowship meals at the church.
The congregation also emphasizes prayer. Two to three dozen men gather weekly at four separate prayer meetings. The men put aside their white foam cups of coffee as each bows and takes a turn talking to God.
“If you did a survey, nearly 100 percent of Christians would say, ‘I need to pray more,’” Dan Cooper said.
“And when you provide a platform where it’s not only accepted, it’s encouraged, people flock to it.”
When the Coopers came to the Pitman church 25 years ago, they brought with them a passion for evangelism that filtered throughout the entire congregation, members say.
“Too many Churches of Christ are served by ministers and not by evangelists,” Dan Cooper said. “If the minister is not casting a vision for the church, if the minister is not teaching Bible studies, who will?”
Church secretary Dottie Grillo has served almost as long as Cooper — 24 years. She began as a two-hour-a-week employee and now works many more than 40. Members joke that she and Cooper can finish each other’s sentences.
“I feel like God put me here, and I just hope to lay down and die here. I really do. I hope they just come in one day and say, ‘Oh, Dottie’s left us,’” Grillo said with a laugh.

When Horatio Fenton met Cooper in the early 1990s, the Jamaican immigrant had just lost his job.
Fenton’s wife, Jackie, had started attending the Pitman church. Horatio visited a few times, but religion wasn’t at the top of his priority list, even though he had been baptized in Florida a few years earlier.
“I was in a depression, and I was ashamed because I wasn’t providing for my family,” he said.
But Fenton’s apparent lack of interest failed to deter Cooper.
The preacher would invite himself over, bring hoagie sandwiches and visit with Fenton as if he were his best friend. Eventually, those discussions turned to God.
“The big thing about Pitman for me is that every time I went there, there was nobody passing judgment,” Fenton said. “Even if I stayed away for a couple of months, I would show up, and I would be embraced. So I felt a love there.”
That love led to Fenton placing membership and becoming actively involved. In 2001, he was ordained as a deacon. And in 2007, he was installed as an elder.
“The nurturing was there, the training was there, and all I needed was the willingness to submit myself,” Fenton said of his transformation. “Of course, I think the Lord had a big part to do with it.”
Pitman leaders work to put members in position to use their God-given talents, Katherine Cooper said.
“If someone comes in and they’re really, really good at writing, we don’t ask them to cook,” she said. “Of course, we all have to do our share in the nursery.”

The church meets in the cramped auditorium of a red-brick building with white columns and “Church of Christ” spelled out in simple black letters.
Constructed in the 1960s, the building sits on two acres surrounded by homes whose owners showed no interest in selling their property.
Instead, the congregation bought 7.5 acres of farmland, bordered by a peach orchard and a creek, where leaders plan a new, larger building 2.4 miles from the present site. With a new building, Dan Cooper said he sees no reason why the congregation can’t grow to 400 and beyond.
There’s a perception that the church can’t grow in the Northeast — that people won’t respond to the gospel.
But the Pitman church defies that notion.
It does so, Cooper said, by loving people and showing them Jesus.
Pitman members embrace the idea that people do not care how much you know until they know how much you care
“I don’t think we’re compromising the truth at all,” Cooper said. “But particularly in New Jersey, and I think most urban areas, people are very leery. They’re very suspicious. They are not trusting.
“So they need to have time for us to validate ourselves, for them to see who we are and that we’re genuine and that we’re not cramming something down their throat.”

Anita O’Hara was baptized at age 65 after longtime member Bertha Kellam invited her to services.
“It was amazing,” O’Hara, now 72, said of the acceptance she felt. “I’m an old bar girl — you know, a lot of drinking. And that sitcom on TV where everybody knows your name, that’s what happened here. I would come and they’d say, ‘How you doing, Anita?’”
O’Hara chokes up when recalling that elder Greg Krinks pulled her aside after she had been visiting the church for a few months.
Krinks pointed out that O’Hara had no teeth. She had lost them in an accident.
“I know I have no teeth,” she said.
“But I want to give you teeth,” he said. “I’m a dentist.”
Sandy Stetser’s husband, Francis, a drug and alcohol addict, turned his life around after Pitman deacon Rich Rinne hired him for a construction job.
Last year, when “Franny” died unexpectedly at age 46, Pitman members overwhelmed Sandy with care and support. As a result, she was baptized.
“It’s the best thing I ever did, absolutely,” she said. “I no longer swear. People at work are absolutely amazed.”

The day after Troy Spencer finished the electrical project at the Thompsons’ house, Mary Lea showed up at his front door with a chocolate cake.
His wife, Kelly Spencer, opened the door and met the woman who would become like a mother to her.
The conversation that day planted the seeds that would lead first to Kelly’s baptism and later to Troy’s.
Troy still remembers walking into the church building for the first time, months before his immersion.
“Dwight greeted me and introduced me to this one and this one,” he said. “I never felt like the new guy. I felt like I walked in somebody’s home and I was immediately a part of the family.”

LOCATION: About 20 miles south of Philadelphia, in a community one block outside the city limits of Pitman, N.J.

HISTORY: The congregation, which will celebrate its 50th anniversary Oct. 30 to Nov. 1, began in November 1959 when 17 people started worshiping in a VFW hall in Pitman.

MISSION STATEMENT: “We, the local body of the church of Christ, devote ourselves to following the will of God as it is revealed in His infallible Word, the Bible. We exist to glorify God in our collective worship, to reach out to the lost with the gospel, and to build one another up in love. Knowing that we are saved by grace, ALL members are encouraged to use their God-given talents to serve others and to grow in faith, toward God and His son, Jesus Christ.”