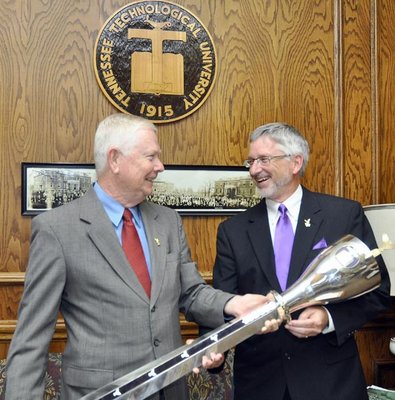 A 1980 Freed-Hardeman University alum, Philip Oldham, is taking the helm as  president of Tenneessee Tech University in Cookeville, Tenn. Oldham fills the top post as Bob Bell retires after 12 years as president.
The Herald-Citizen reports:

Bell has worked with Oldham in the past and says he saw great potential and leadership in him from the start.
“I have known (Oldham) a number of years and he will be a great president,” Bell said. “I am confident of what he is going to be doing. I am hoping to leave him in good standing so the university is as well poised as it can be.”
Oldham has spent the last several weeks doing lots of listening and getting familiar with the campus and community, he said.
“There is just a lot of richness to (the university),” Oldham said. “I sort of knew it from a surface level, now I am beginning to drill down and see who the characters are and who the players in the different areas are and the personalities that are involved. Once you get to know the people, you begin to get a feel for, ‘okay that’s why it works the way it does.’ It is a whole lot easier to understand the dynamic. I have still got a lot more learning to do in that regard.”
Bell’s goal of leaving the university well poised is something Oldham says he is looking to build on.