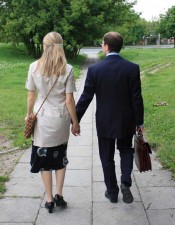 Erik Tryggestad
VILNIUS, Lithuania — Before he became a Christian, minister Juozas Puodziukaitis was a self-described “metalist.”
“A Methodist?” asked a confused reporter.
“No, a metalist,” he repeated.
“A mentalist?”
“No, a metal-ist,” he said, searching for an English phrase to describe what he meant. “I listened to … hard music.”
Perhaps “metalhead” would better describe Puodziukaitis’ former life. He and his friends raved to ear-splitting death metal bands, wore black clothes and drank plenty of alcohol.
“We kind of worshiped the devil,” he said. “I was really opposite man! But I was not supporting God’s side, not supporting the devil’s side. I was kind of apathetic.”
He’s apathetic no more. Puodziukaitis, who was baptized in 2000, preaches for a small church in Vilnius, the capital of Lithuania, the southernmost of Europe’s three Baltic states.
His co-minister, Ilja Amosov, also has a dubious past. Before his baptism, Amosov was a “street punk, a hoodlum,” he said.
He often was in trouble with his mother — and the law. He once was arrested for shoplifting a Pepsi and wanted nothing to do with Christianity.
“My mother brought Christians to preach to me, and I was cursing them,” Amosov said. He was 20 at the time.
A year later, he was a convert.
The ministers, now both in their early 30s, bring authenticity to the pulpit, said Charles Myer Jr., an elder of the Gateway church in Pensacola, Fla., which coordinates support for the Vilnius church. Both ministers know the Lithuanian language and culture, and both have reached friends and family with the message of Christ, Myer said.
Sasha Kostina, a cousin of Amosov, was baptized recently at the Vilnius church.
“I like to listen to their sermons, which are extremely different,” Kostina said. “Juozas’ sermons usually include jokes and funny situations from everyday life, and Ilja’s have very deep meaning. They make you start thinking about God and our life.”
‘I KNEW … HE WOULD BE BAPTIZED’
Years before they were married, Puodziukaitis’ wife, Zivile, gave her future husband an ultimatum: “If you want to get to know me, you have to read the Bible.”
Zivile first heard about Churches of Christ when a friend at her university gave her a World Bible School correspondence course.
She and her friends studied with church members from the U.S., who made frequent visits to the former Soviet republic in the mid-1990s.
“Some people were interested just to see Americans,” she said. “A lot of people got baptized. Some of them didn’t come back.”
Zivile stayed strong in her newfound faith, even though her boyfriend wanted nothing to do with the church, which he considered a sect. She feared Juozas would leave her — especially when she told him that her Christian beliefs meant no sex before marriage.
But Juozas agreed to her terms, even though he and his friends poked fun at her piety. He would take Zivile to parties “only if you don’t talk about God,” she remembered Juozas warning her.
“I’m not the one starting the conversation,” Zivile told him.
Though Juozas continued to avoid church, Zivile soon noticed a change in her boyfriend. Instead of joining his friends in attacking her faith, he started defending her. He also started reading the Bible.
“I knew at that time he would be baptized,” Zivile said.
That belief wavered when she traveled to the Boston area in 1999 to work for 13 months as an au pair. As she took care of children overseas, she feared her boyfriend would sink back into his old habits. Then she got a shocking e-mail from a friend: Juozas was going to church.
Missionary Kevin Carson started studying with Juozas and invited him to help at Camp Ruta, an annual children’s Bible camp in the Lithuanian forest. A group of young Christians from the Waterview church in Richardson, Texas, served as counselors.
“They were a good example for me,” Juozas said. “They showed me that Christian life is fun, too.”
After camp, Zivile got another e-mail: Juozas was a Christian.
On Aug. 25, 2001, the couple married. Juozas completed a ministry training correspondence program through Lubbock, Texas-based Sunset International Bible Institute.
In 2003 they moved from their home in Klaipeda, Lithuania, to work for the Vilnius church.
Their daughter, Tija, turns 4 this month.
REACHING A POST-SOVIET WORLD
Amosov’s conversion story is simpler than that of his co-minister. He rebuffed his mother’s attempts to get him into church, but eagerly followed a close friend to a Bible study.
“Well, let’s go, there are Americans,” his friend told him.
He was impressed by the simplicity of the gospel message and soon decided to be baptized. He began training for ministry. Two years ago he married Daiva, a Lithuanian Christian he met through the Internet.
“I have seen him grow so much over the years in his attitudes, faith and leadership ability,” said Danny Dodd, a former missionary to Vilnius and now preaching minister for the Gateway church. “He and Juozas compliment each other so well and use each other’s strengths to guide the church.”
The Vilnius church, which meets in a hotel conference room, has about 35 members and baptized several people in the past year.
Winning hearts to Christ in an increasingly jaded post-Soviet Europe is challenging, Amosov said. He takes encouragement from Bible stories about Jesus blessing small efforts — including the miraculous catch of fish in Luke 5. One of his favorite verses is Proverbs 24:27: “Finish your outdoor work and get your fields ready; after that, build your house.”
“This really motivates me to finish what I’m doing,” he said.
Visits by short-term workers from the U.S. also encourage the ministers and young church members, giving them a sense of connection, he said.
To emphasize the point, Amosov donned a well-worn Ole Miss baseball cap given to him by a friend in the U.S.
“You know, I am really just a Mississippi redneck boy that preaches the Gospel in the country,” he said, in a decidedly un-Southern accent.