Outreach that started with a small medical clinic has grown to meet needs ranging from education to water systems.

JINOTEGA, Nicaragua — In a nation where many live on just a few dollars a day, things most U.S. residents take for granted make a world of difference.

An aspirin to relieve a headache. A filter to provide clean water. A classroom for boys and girls to receive an education. 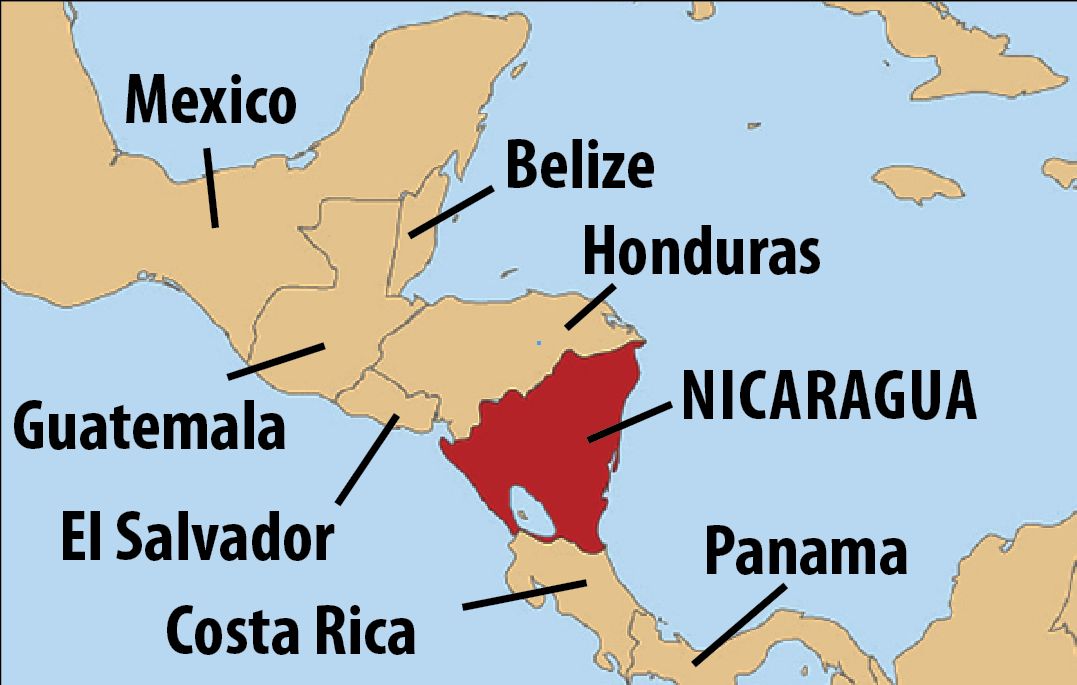 Here in Central America’s poorest country, a 20-year-old outreach called Misión Para Cristo — Spanish for “Mission for Christ” — brings blessings such as these to thousands.

“It’s a basic fact,” said Benny Baker, the American missionary who with his wife, Donna, started the Christian nonprofit in 1997. “You cannot teach a hungry man. You cannot teach a man who is sick. They are not in a position to hear.”

Misión Para Cristo began with a small medical clinic in this mountain city a few hours north of the capital of Managua. The Bakers worked with a Nicaraguan minister and 12 church members to launch the clinic. 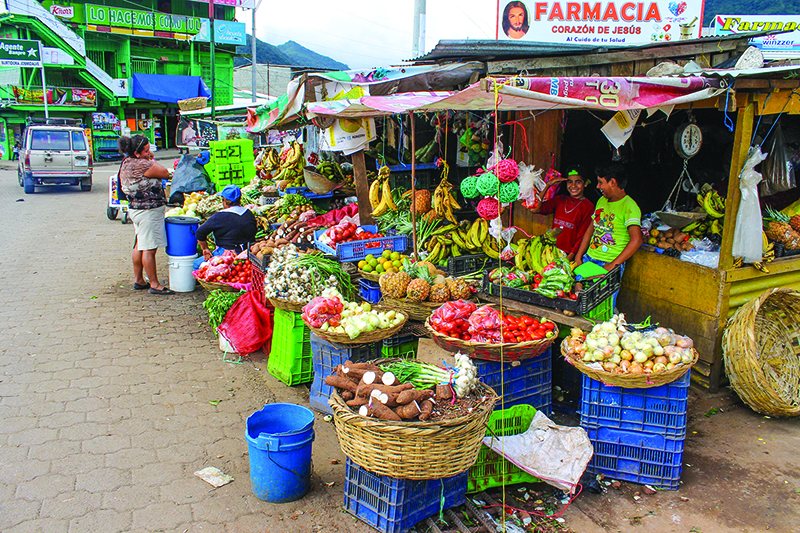 Fresh fruits and vegetables are sold at the market near Misión Para Cristo. (PHOTO BY BOBBY ROSS JR.)In the two decades since, the mission — overseen since 2013 by the Grapevine Church of Christ in Texas — has planted dozens of congregations, built or remodeled 25 school buildings and become one of Nicaragua’s largest providers of medical care outside of the government.

Besides nearly a dozen full-time American missionaries, Misión Para Cristo relies on a core staff of 47 Nicaraguans — including directors who coordinate areas such as health care, education and construction.

“How did we get here?” Baker said, contemplating the 40,000 patients served each year and the 1,000 adults and children who worship with 28 congregations supported by Misión Para Cristo. “It’s a God thing.”

KIDS RUN TO THE VAN

Roosters crow in the morning, and firecrackers explode at night.

In between, vehicles honking and vendors shouting provide the soundtrack for hundreds of short-term missionaries who make annual pilgrimages to Misión Para Cristo.

About 35 groups — mainly from Churches of Christ and Christian universities such as Harding and Lipscomb — come to serve each year in this poor, coffee-producing region of northern Nicaragua.

The mission houses up to 75 guests at a time in a remodeled, two-story warehouse across the street from a bustling city market and bus stop. Fees paid for meals and lodging cover a major portion of the ministry’s year-round operating expenses.

“My wife says, ‘We’re not the Hilton; we just try to be,’” Benny Baker quipped. 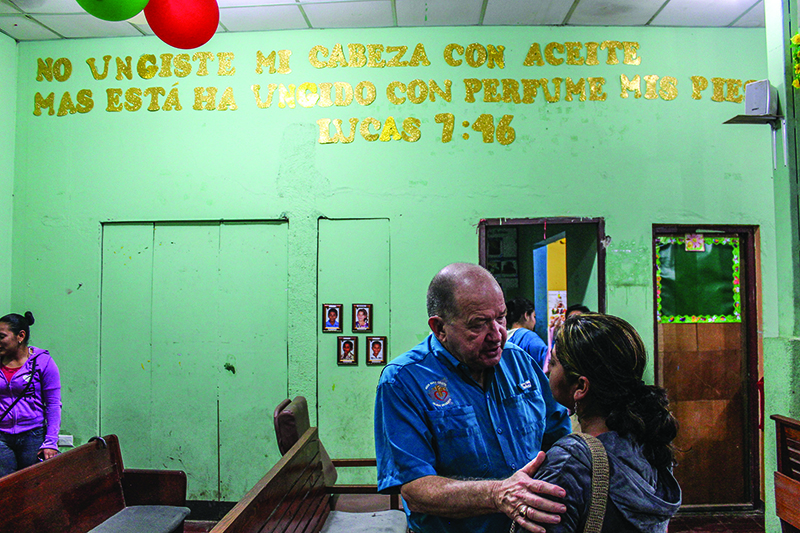 “They have so many projects, and they are doing so many things,” said Wilkerson, a pharmacist and member of the Parr Avenue Church of Christ in Dyersburg, Tenn. “Everybody knows them.”

On her trips, Wilkerson has stitched baby blankets, made bricks to build houses and distributed anti-parasite medication. 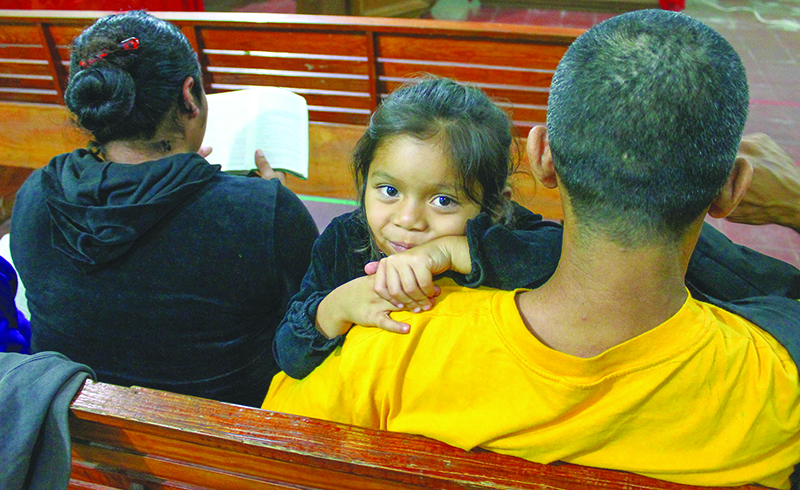 A girl named Maira rests on her father Martin Marvin Herrera’s shoulder during a Tuesday night Bible study at the Jinotega Church of Christ. At left, her mother, Anabel, listens to the lesson. The church meets at a remodeled warehouse that serves as the home of Misión Para Cristo. (PHOTO BY BOBBY ROSS JR.)
365-DAY-A-YEAR MISSION

Jinotega — home to 125,000 souls — is the largest city in a region that suffered some of the worst violence during Nicaragua’s long civil war.

Although the war ended a quarter-century ago, many still associate this nation of 6.2 million people with the fighting between the Contras and the Sandinistas. 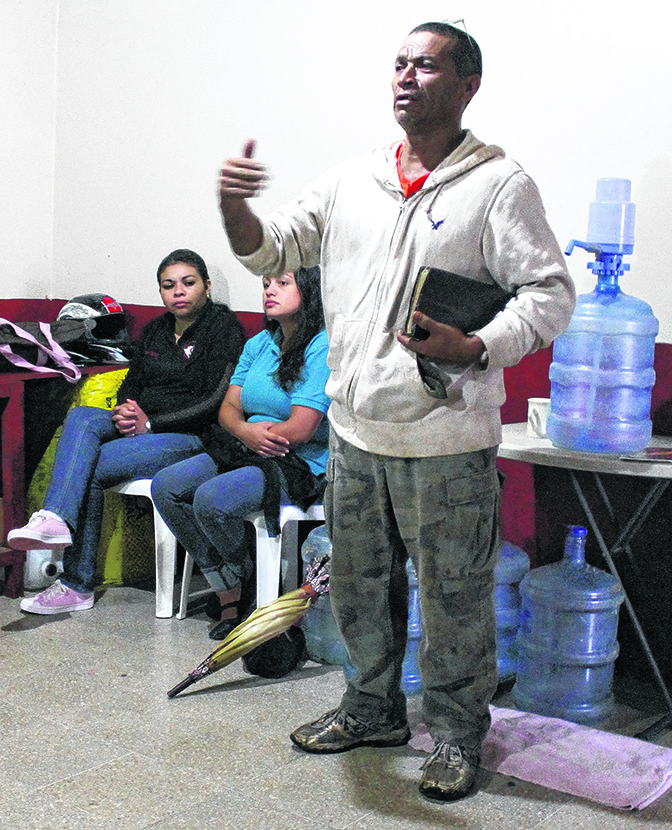 Martin Marvin Herrera speaks during a morning devotional for Misión Para Cristo staff. (PHOTO BY BOBBY ROSS JR.)“It’s actually much safer than it is (in America) from a violent crime standpoint,” said Dr. Patti Patterson, a Texas Tech University Health Sciences Center professor who brings groups of medical and nursing students. “The mission does a fantastic job of keeping us safe.”

Texas Tech offers the trip as a global health elective, and participants have included Hindus, Muslims and atheists, said Patterson, a member of the Monterrey Church of Christ in Lubbock, Texas.

She warns the students that Misión Para Cristo is a Christian organization and that they should expect prayers before meals and voluntary devotionals.

“It’s all worked fine, and actually, the different backgrounds lead to really great conversations,” she said, adding, “The Christianity I believe in is doing stuff with your hands, not just talking with your mouth.”

Patterson said she likes that the teams she organizes contribute to an ongoing mission.

“We’re not just helicoptering in and doing good and leaving,” she said. “The mission is there 365 days a year.” 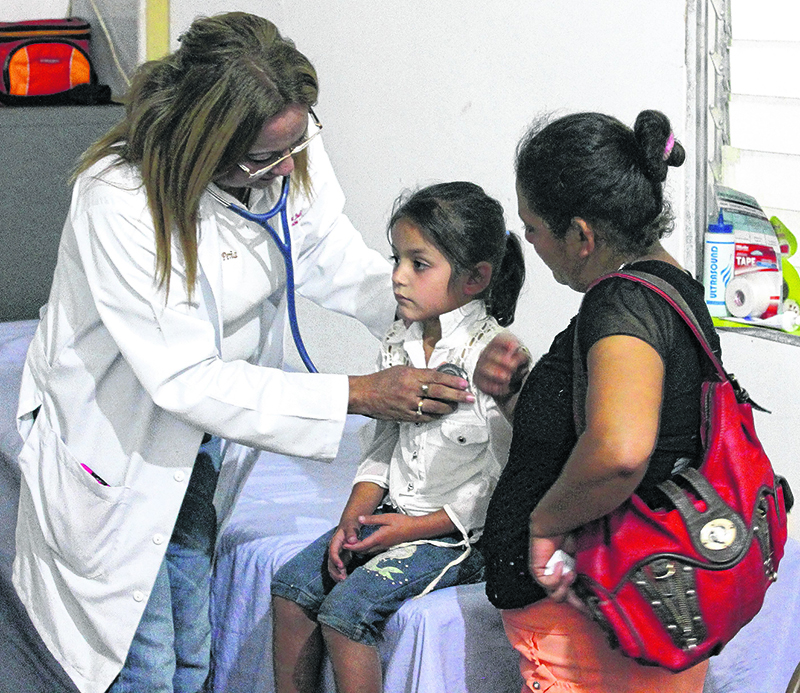 On a typical weekday, women and children line up at the clinic to see Dr. Judith Peña, the medical director, and Dr. Bismarck Rivera, a dentist.

While waiting, they listen to preaching by Edward Martinez, minister for the Jinotega Church of Christ. 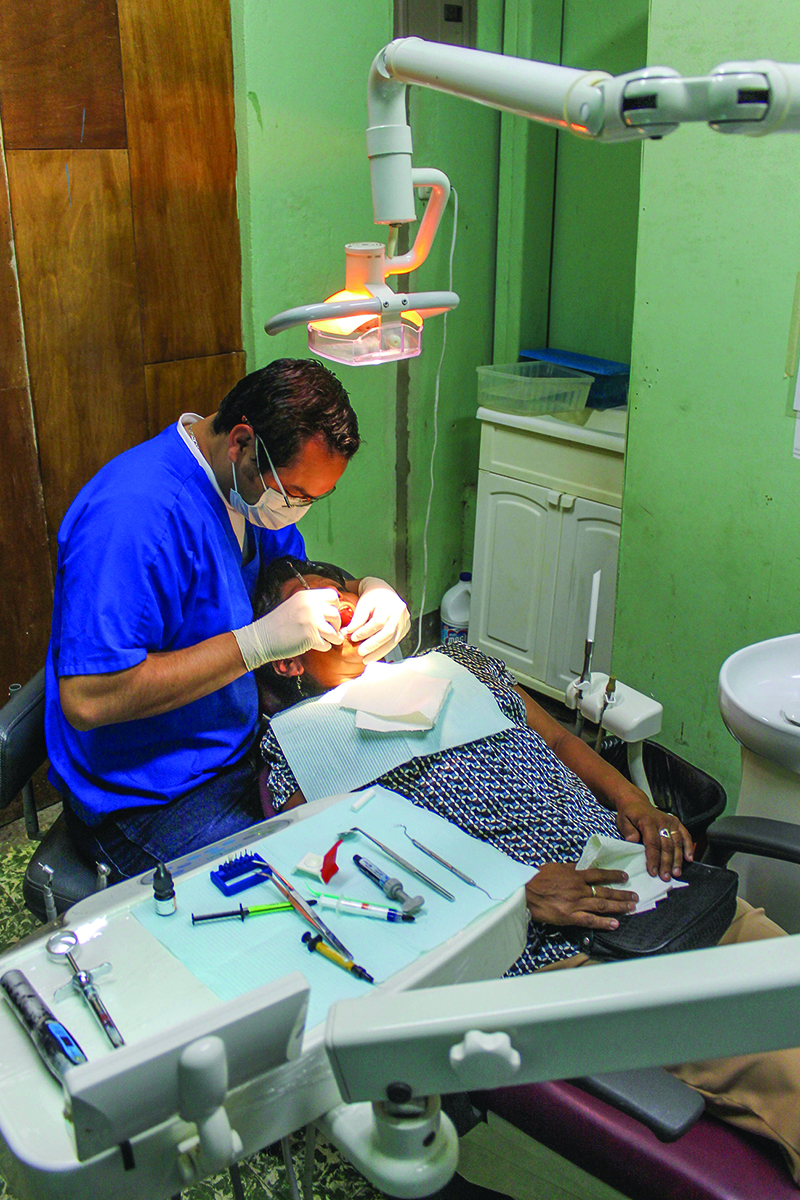 Dr. Bismarck Rivera works on the teeth of a woman in the clinic’s dental office. (PHOTO BY BOBBY ROSS JR.)“They respect it when somebody talks about the word of God,” Martinez said.

“Jesus Christ does the work, and we are part of it,” she said.

In another part of the building, Rebeka Molina coordinates a project for pregnant mothers — many of them young, single and lacking basic necessities.

“I know the needs that they have,” said Molina, who was unmarried when she became pregnant with her 4-year-old son, Marcelo.

“I don’t kid myself,” said missionary Jonathan Holland, who is married to Sheila and has an adopted Nicaraguan son named Alejandro. “Part of the reason they come is that we feed them.” 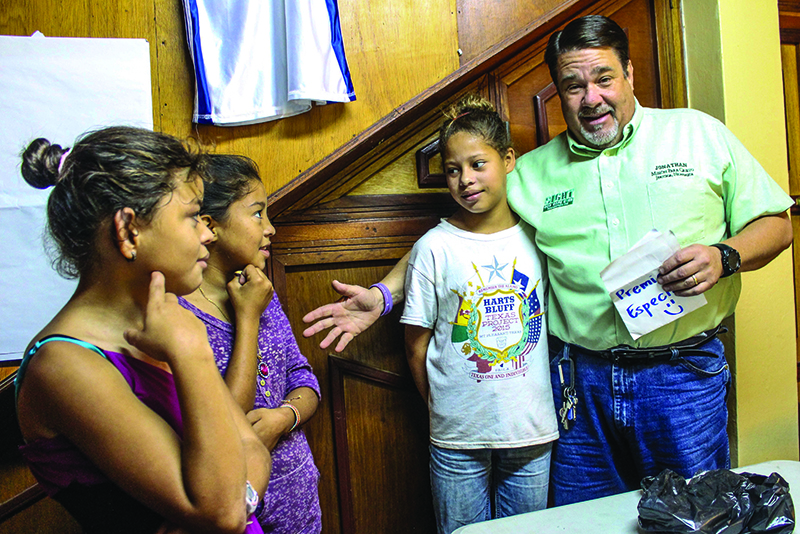 Many places the mission serves are difficult to reach.

Medical brigades involved with a project called Esperanza del Río — “Hope for the River” in English — travel hours in boats to an indigenous region.

To visit schools, education director Felipe Cuadra steers a four-wheel-drive truck. Even then he sometimes must park, cross water on foot and walk 20 to 30 minutes. 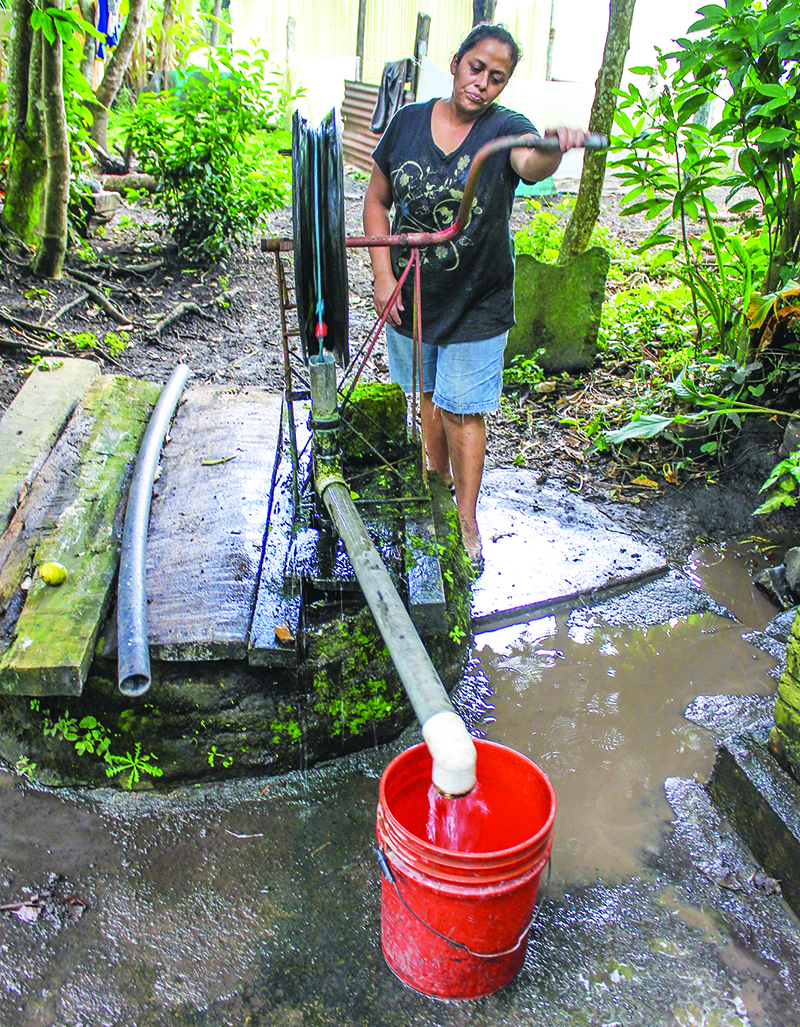 Cats and chickens scamper across the dirt floor in the tin-roofed home that Hernández shares with six family members.

The man beams as clear water pours through a filter funded by Hope4Life.

People in nine villages have received a total of 900 water filters through Hope4Life, Gutiérrez said. However, he stressed that the goal isn’t to build up numbers. It’s to share the Gospel.

“It’s about going slow, focusing on the needs the people have,” Gutiérrez said.

“He gives us hope,” the farmer said. 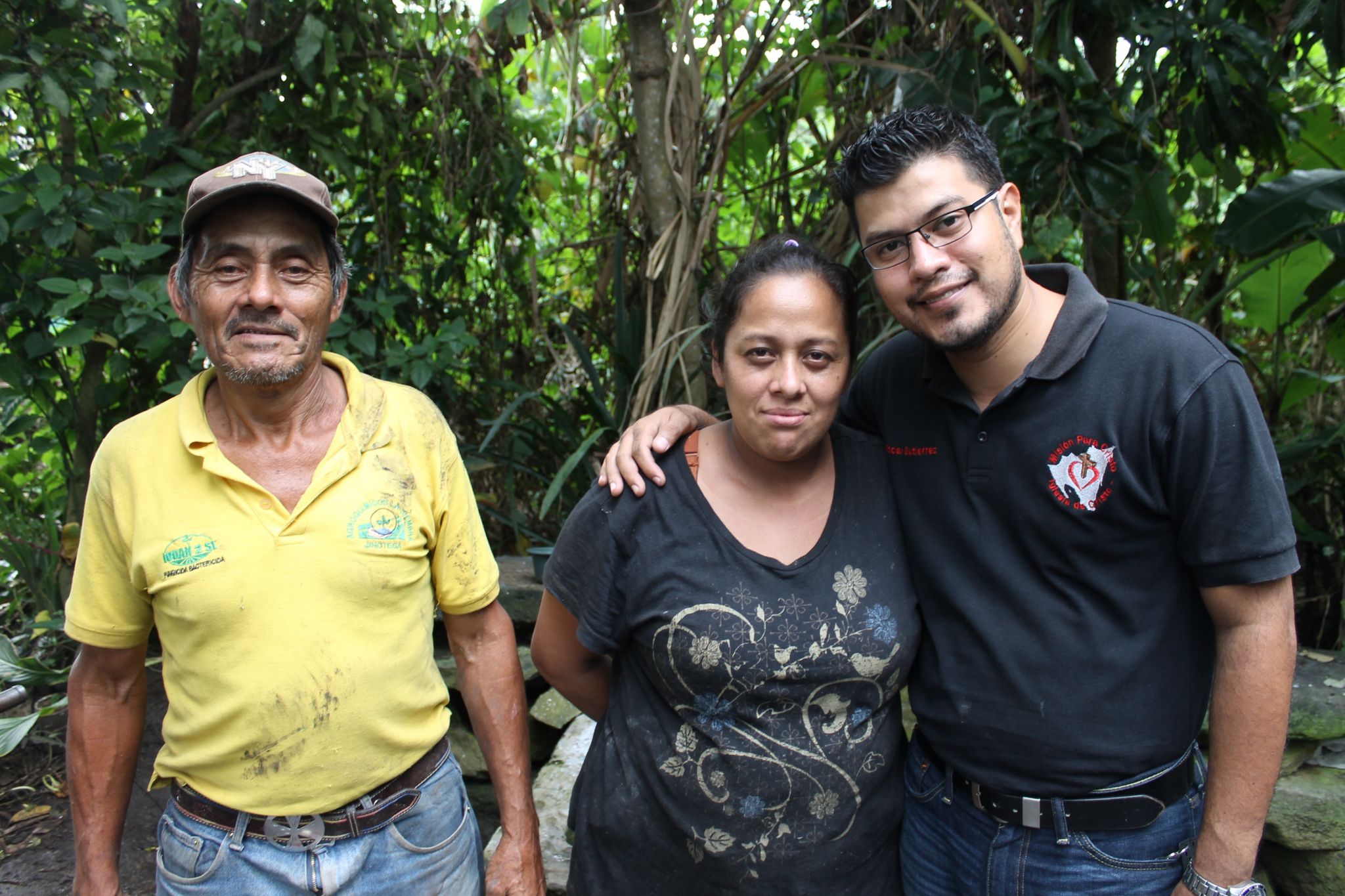 PRESIDENT: Daniel Ortega, a 71-year-old former Sandinista guerrilla fighter, was sworn in for a third five-year term in January. His wife, Rosario Murillo, became the new vice president. Misión Para Cristo works closely with the government on projects such as education and health care. 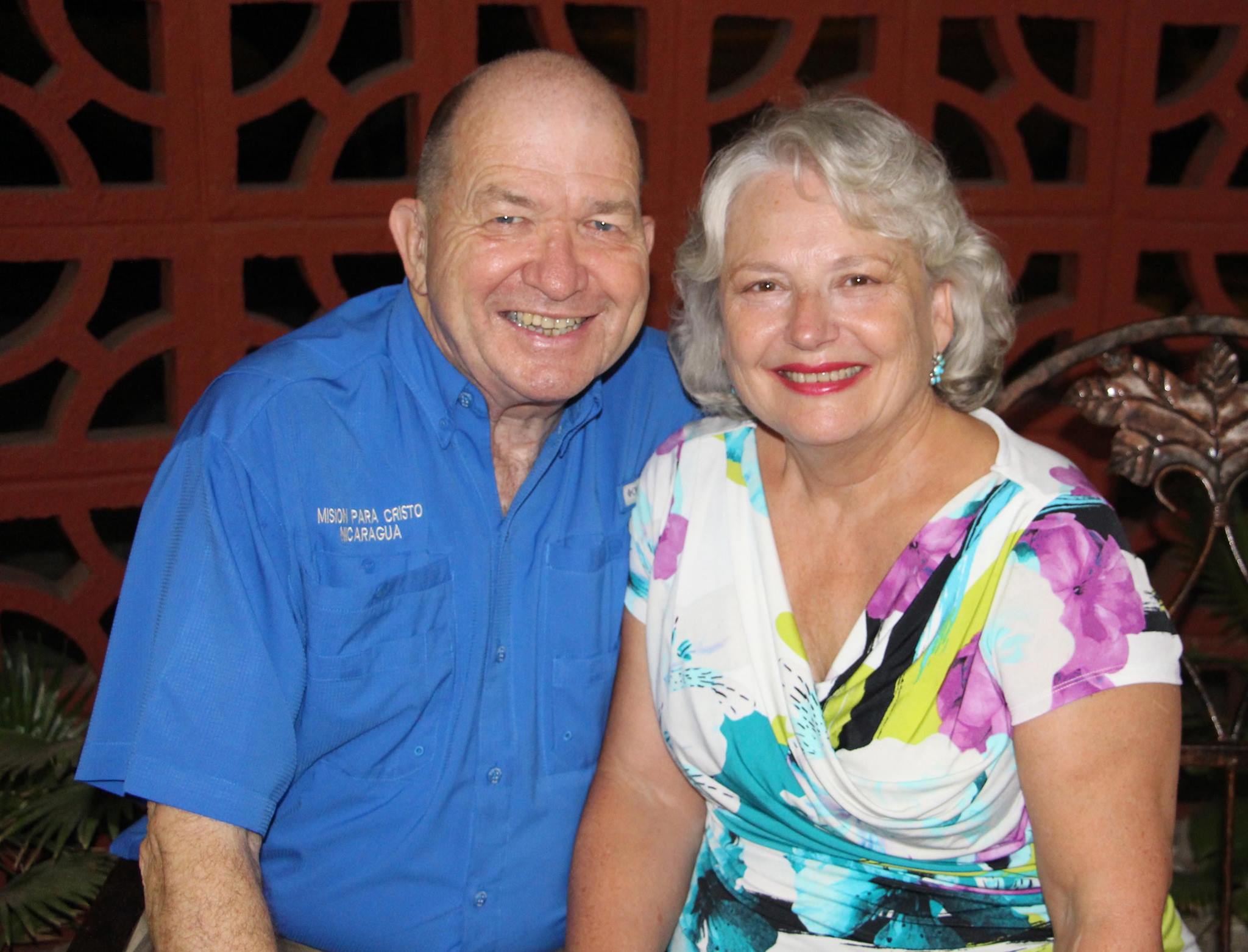 Benny and Donna Baker MISSION’S HISTORY: After founding Misión Para Cristo in 1997, Benny and Donna Baker traveled to Nicaragua several times a year while living in the U.S. In 2005, the couple moved to Jinotega to serve full time. They still make regular fundraising trips to the U.S., and Benny Baker stresses that the mission’s Nicaraguan staff members are the “boots on the ground.” 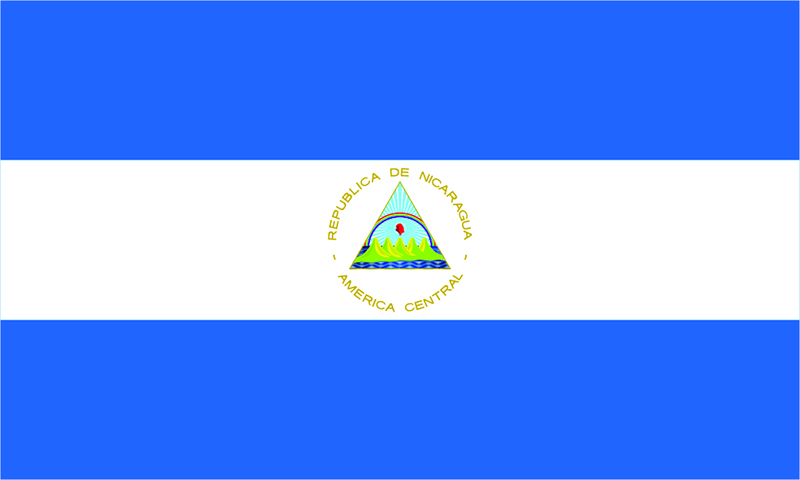