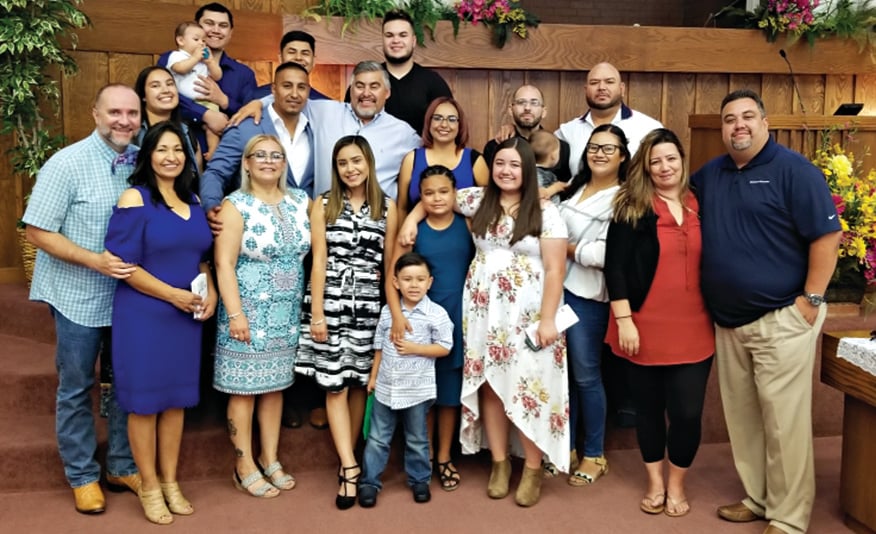 After El Paso massacre, one Mexican-American grandmother turns to God for answers and comfort

For Monica Moreno, the first news of the El Paso, Texas, massacre came via social media.

A glance at Snapchat drew her attention to a relative’s post warning of an active shooter at a Walmart in Moreno’s hometown. 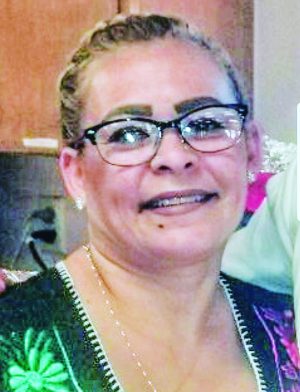 By the time the rampage ended that Saturday, 22 people were dead. They ranged in age from 15 to 90. Almost all had Hispanic surnames.

A single gunman, armed with an AK-47-style assault rifle and identified as an immigrant-hating white supremacist, was implicated. According to an affidavit, the suspect, 21-year-old Patrick Crusius, told a police detective he targeted Mexicans. Crusius is charged with capital murder and being held without bond.

Moreno attends the Montwood Church of Christ in El Paso, the border city where she was born and raised. She stared at her television screen in disbelief.

“It hits so close to home,” the 48-year-old mother of six and grandmother of five told The Christian Chronicle. Her own mother and brother immigrated to the United States from neighboring Mexico.

As the FBI investigates the shooting as a case of domestic terrorism, Moreno grapples with the idea that the gunman chose victims based on their ethnicity — “with no remorse, like they didn’t mean anything.”

“It’s heartbreaking … so hard to believe,” she said. “I can’t imagine what the families are going through.”

‘So much life ahead of him’

“That young man had so much life ahead of him,” Moreno said of the 15-year-old. “His life was cut short by a selfish killer that had something to prove, I guess, to fit in with Donald Trump. It’s a hard subject.”

Trump made opposition to illegal immigration a major part of his successful 2016 campaign. 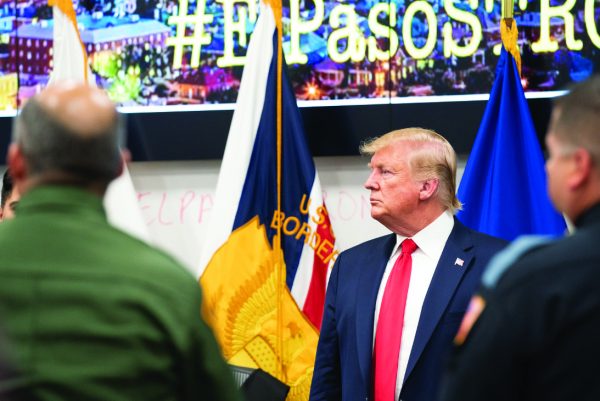 An #ElPasoStrong sign can be seen in the background as President Donald Trump visits the Texas border city after the mass shooting that claimed 22 lives.

In a statement to the nation two days after the Aug. 3 shooting, the president condemned hatred and white supremacy.

“The shooter in El Paso posted a manifesto online consumed by racist hate,” Trump said. “In one voice, our nation must condemn racism, bigotry and white supremacy. These sinister ideologies must be defeated. Hate has no place in America. Hatred warps the mind, ravages the heart and devours the soul.”

On Facebook, Charles Clodfelter, minister for the Eastwood Church of Christ in El Paso, urged friends to “pray for those who lost family and for our country.” He voiced support for Trump and frustration with the politicization of the massacre.

Theresa and I were in Costco when customers cell phones began to ring with the alert tone. Active Shooter. Bassett…

The minister and his wife, Theresa, were at a Costco a few miles from the Walmart when shoppers’ phones beeped with active shooter warnings.

In the church bulletin the next week, Clodfelter wrote, “The past several days have been hard for our city, state and nation. But it is especially difficult for those who were directly touched by death, injury or terror of trying to escape a mad gunman. How could anyone think the murder of scores of innocent people would be the solution of any problem?”

A full-time preacher since 1962, he pointed to Jesus as the solution.

“Unfortunately, our society has left the teaching of morality to others,” Clodfelter wrote. “Parents have treated Jesus as not relevant to life or eternity. As a result, their children struggle to even believe in God. We are a mission field.”

Another day, another mass shooting

Just hours after the El Paso shooting, the inexplicable happened again — 1,600 miles away.

In the wee hours of Sunday, Aug. 4, a different gunman murdered nine people in a nightlife district in Dayton, Ohio.

Still reeling from Memorial Day tornadoes, many in Dayton were left “feeling depression, anger and emptiness,” said Andrew Brewster, elder and minister for the Church of Christ, North Dayton.

As in El Paso — where the hashtag #ElPasoStrong seems to be everywhere — the Ohio community has embraced the slogan “Dayton Strong.”

“People have worked together … helped each other,” Brewster said. “In the midst of suffering and loss have been many Christians serving and helping those harmed.

“Many prayer vigils have been held,” he added. “Many have cried together. The giving of love and support to others has been so remarkable. It is almost unbelievable the acts of kindness and love that have been demonstrated.”

Between them, El Paso and Dayton count about two dozen Churches of Christ with roughly 2,400 men, women and children in the pews on a typical Sunday, according to a national directory published by 21st Century Christian.

In El Paso, Army Capt. Cynthia Turner, a chaplain stationed at Fort Bliss, said the shooting has had a ripple effect. 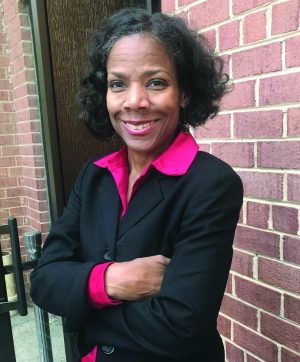 “The city overall took a blow,” said Turner, who graduated from Harding School of Theology in Memphis, Tenn., in 2012.

The Walmart where the massacre occurred is next to the popular Cielo Vista Mall, so everybody in El Paso is familiar with it, she said.

“It rocks your world in that sense,” said Turner, who still considers the Raleigh Community Church of Christ in Memphis her home congregation. “So it affected all of us.”

The chaplain voiced hope that the tragedy might open opportunities to share the Gospel with those touched by the senselessness of evil.

Already, she’s seeing signs that the shooting changed people in small ways, such as how they interact with fellow drivers.

“Before, there was this rush, this blowing and cutting you off. I would say that’s to a minimum now,” she said. “People are a little more polite and understanding, watching out for one another and just being a little more vigilant.” 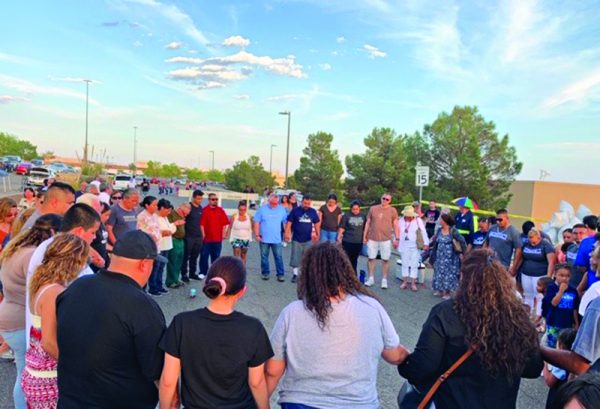 Members of Churches of Christ gather in a circle and hold hands as they pray outside the Walmart in El Paso, Texas, where 22 people were killed Aug. 3.

At Moreno’s home congregation the Sunday morning after the shooting, minister Donnie Martin put aside his previously planned sermon and focused on the tragedy.

“We really just wanted to encourage people to keep trusting in the Lord even in these hard times,” Martin said.

My woefully inadequate sermon yesterday, which may help somebody if God chooses to use it:1 Samuel 30:1-10 — How do we…

After the service, Moreno approached Martin and the church’s elders with the idea of organizing a prayer vigil at the massacre site. They quickly agreed.

That Monday, more than 30 Christians — including members of the Montwood and Eastwood congregations and the Northside Bilingual Church of Christ — joined hands and prayed at the makeshift memorial.

The circle grew as other mourners joined in.

“We would have 60 people holding hands at one time,” Moreno said. “Even if we didn’t ask them to join us, they would just cut in and hold hands with us. It was so beautiful.”

“At the end of the day, if we’re right with God, I feel like he’ll get us through anything.”

Moreno brought 22 white balloons to the scene — one for each victim.

She recited the names. Fellow Christians and even strangers released the balloons into the sky.

“At the end of the day,” she said, “if we’re right with God, I feel like he’ll get us through anything.”

Posted by Church of Christ In Eastwood on Monday, August 5, 2019 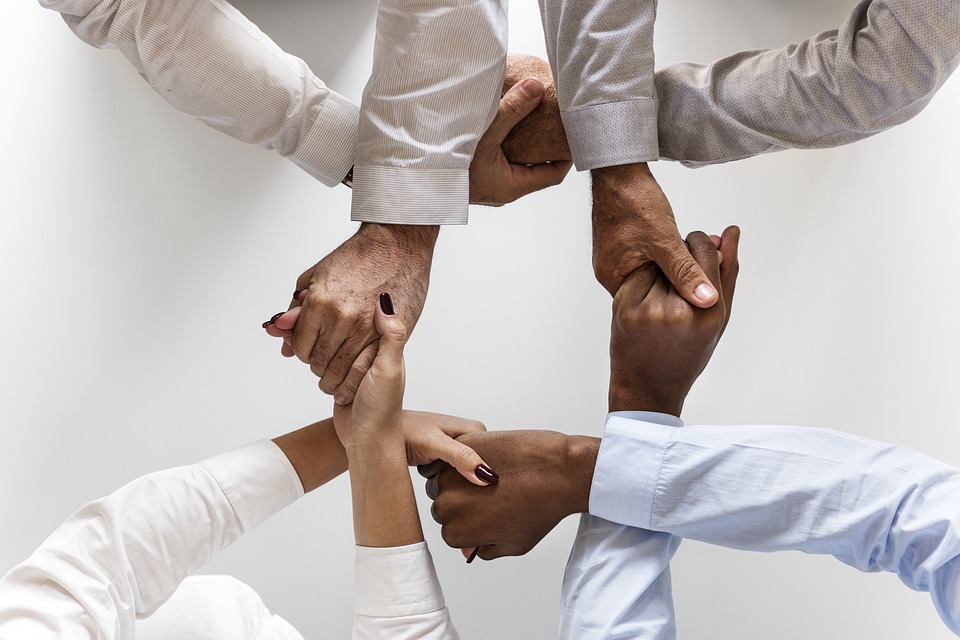 ‘I have to admit that I’m a little afraid.” That note…