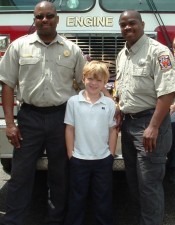 For Alabama boy, a gift that keeps on giving

staff reports
MOBILE, Ala. — When Jacob Brooks gave away his own birthday gift, people noticed.
Jacob, a first-grader at Mobile Christian School, was asked along with other students to donate $1 to the Eastern European Mission Bible Fund during the school’s recent Spiritual Enrichment Week.
The baseball enthusiast decided instead to give $100 of his birthday money, which he had been saving to buy sports equipment, said Gina Englund, Jacob’s teacher.
“By Friday, Jacob had convinced his mother that he was sincere and fully understood what he was doing,” Englund said. Both women said they were flabbergasted, but proud.
Color them all surprised, though, when later that week the class visited a local fire station. The children had collected goodies for firefighters to show their appreciation and were thrilled to meet their heroes.
When told of Brooks’ gift earlier in the week, however, every firefighter wanted to shake hands with the child.
“I called Jacob over, and one of the firefighters … opened his wallet and handed him $2, saying God always repays those who give,” Englund said. Capt. Sam Tucker then handed him a $100 bill, saying that because he gave his money to God’s work, he would be blessed.
“God teaches us great lessons through children,” Tucker told the youngster.
David Pahman, headmaster of the 50-year-old school, echoed Tucker’s sentiments.
“Although many lessons were taught this year at Mobile Christian, the lesson that Jake taught and learned will be one of the most memorable for students and teachers alike,” Pahman said.