Ash, who grew up in Churches of Christ, talks about his decision to give up football after multiple concussions.

The Houston Chronicle shares the touching story of David Ash, the Texas Longhorns quarterback who recently made the painful decision to give up football after suffering multiple concussions.

The story mentions Ash’s childhood in the pews of the 15th Street Church of Christ in Temple, Texas. 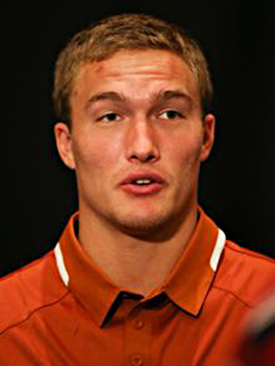 David Ash couldn’t play forever. He knew this even when he was 6.

Outside the 15th Street Church of Christ in Temple, there’s a bush where he used to begin his Sunday mornings by hiding a football. As soon as the service ended, Ash would tear off his church clothes – he usually had planned ahead and wore his play clothes underneath – and headed straight for the ball.

“It was a lot faster to get it out of the bush than to ask my dad for the keys to the car,” Ash said. “So I had the maximum amount of time to play with it.”

He spoke eloquently about the importance of his religious faith, saying: “I’m not a victim, I’m a victor. Football was never my gift – Jesus was.”

As a high school friend of Patrick Mahomes, Spencer Shaw…