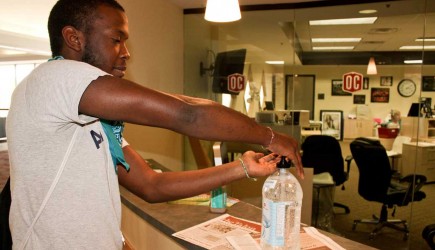 Staff Reports
Students at Christian universities across the nation are learning more than they’d like about seasonal flu and the H1N1 virus.
Record numbers of cases at some campuses are prompting officials at universities associated with Churches of Christ to take unprecedented steps — including canceling daily chapel — to curb the spread of illness.

At Oklahoma Christian University in Oklahoma City, an e-mail from dean of students Neil Arter delivered the message that daily chapel would be canceled all week — a first in the schoo’ls 59-year history, Arter believes.
“Hopefully (this will) help us slow down the spread on campus withouthaving to adjust our academic offering,” he said, adding that facultyalready have re-evaluated attendance requirements and some make-uppolicies because so many students have been ill.

Barely into its own school year, officials at Faulkner University inMontgomery, Ala., had to make a similar call, said spokesperson LauraCauthen. Chapel was called off for several days and otherwelcome-themed, school-wide activities were nixed, she said.

Arter said doctors have been making “house calls” to students’ dormrooms and apartments. “The level of concern for everyone on our campushas risen,” he said, adding that parents are worried about theirstudents, as well.

To that end, Faulkner is treating ill students as though they do havethe flu, said Brenda Campbell, nurse at the university’s health center.

“We start a ‘flu protocol’ with each student that presents withflu-like symptoms,” Campbell said. “The student is given a mask, handsanitizer, and printed instructions of what to do next.”

If the student is considered to be flu positive, the dorm or apartmentsupervisor is notified and arrangements are made to move roommates toanother location, she said.

“Although the epidemic has somewhat subsided in our area, Faulkner isstill taking daily precautions to minimize transmission,” Cauthen said.

At other universities, preventative measures continue. Health workersand nursing students at Abilene Christian University in Texas aretaking flu vaccination to student dormitories in hopes that theconvenience will persuade more students to get a shot.

There’s also a prize at stake: $400 for the dormitory with the highestpercentage of residents vaccinated. Before the dorm delivery began,that figure stood at around 10 percent.

The entire process of screening the student and administering the shottakes less than a minute, said Michelle Drew, nurse practitioner in theACU Clinic. The flu shot is $15 for students and can be billed to theirstudent account.

”Close living quarters, classrooms and eating spaces make allinfectious diseases easy to spread but especially respiratory illnesslike the flu,” Drew said. “This fact has made those of us charged withmeeting the healthcare needs of university students realize that wehave to be not only reactive but proactive.”

Rochester College in Michigan is employing a similar approach.President Rubel Shelly was given his flu shot during chapel whilemaking an announcement that Rochester would pay for vaccinations forany student, faculty or staff member who would follow his lead.

“There’s a heightened sense of urgency to be prepared,” Shelly said,adding that Rochester has partnered with a local hospital in itsefforts to keep the campus community healthy.

Isolating ill students who cannot return home has become standardpractice at many universities. This means student life offices anddormitory staff must pitch in to care for them, said Dennis Cox, seniorvice president at Ohio Valley University in Vienna, W.Va., who saidthey’re “preparing for the worst.”

“A crisis management team … has been formed to address potentialproblems in the dormitories brought on by a flu outbreak and  plan formeeting the needs of students who are ill in their dorm rooms by bringing in meals and medication,” Cox said.

“We are doing our best to prevent widespread illness.”

York College in Nebraska hasn’t been hit hard by the flu. Yet.

Dean of students Shane Mountjoy said that while cases have occurredearlier than usual, they don’t seem more severe than in past years.

“Our campus has taken steps similar to plans we made to deal with theaviary flu, which for us turned out to be exaggerated,” Mountjoy said.Students are noticing — and using — more hand sanitizing stationsaround campus, he said.