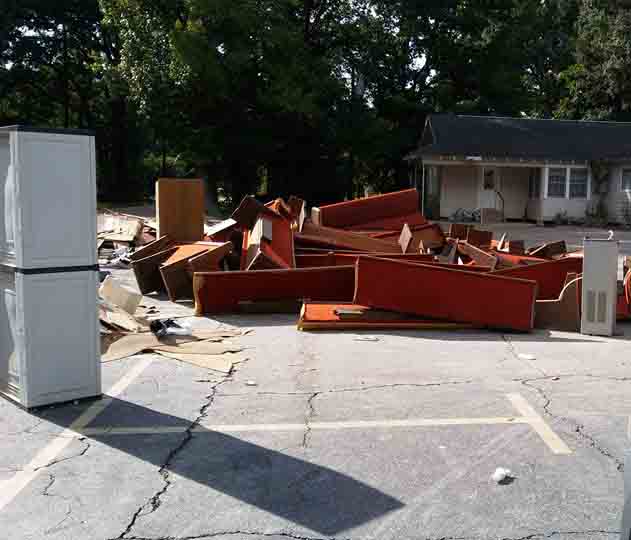 The Denham Springs church building and the homes of most members were heavily damaged by flood waters.
Chellie Ison
“It’s tremendously overwhelming,” Mike Abbott, minister for the Denham Springs Church of Christ in La., told The Christian Chronicle, referring to the damage surrounding him.

Denham Springs was just one of the areas flooded earlier this month when the Amite River poured out of its banks.

“Our church is about a half mile from the Amite River,” Abbott said.

The church building, the minister’s home and the homes of nearly 30 families within the church all flooded. A staggering number considering the church is made up of about 40 families.

“So much of our congregation was affected by this my concern was the church building, who’s going to be able to help us with that,” Abbott said. 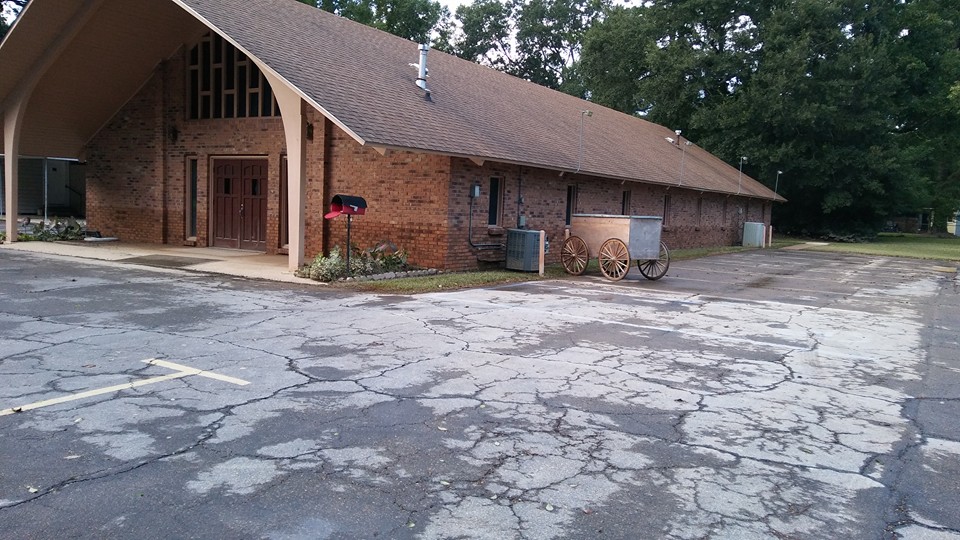 A water line around the outside of The Denham Springs Church of Christ shows just how high the flood waters were. (PHOTO PROVIDED)The water came up three-feet in the building, ruining everything it touched. The pews, drywall and carpet were all soaked.

It happened fast. As the water was rising, Mike Abbott and his family tried to get to the church building to move furniture but they were stopped by police blocking roads that at the time were starting to look more like rivers. 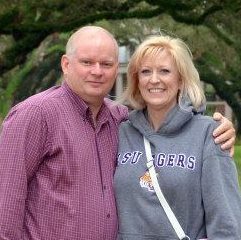 Mike and Sherry AbbottIt was then they realized their own home was in danger. Unable to reach the church building they rushed home, loading what they could into their car and leaving.

“My neighbors had lived there for years and said they’d never seen water in that subdivision,” Abbott said.

But this was different. This time his home and those around it flooded. The water line on the outside brick showed that the water came up 33-inches high. Everything they had left behind was ruined. 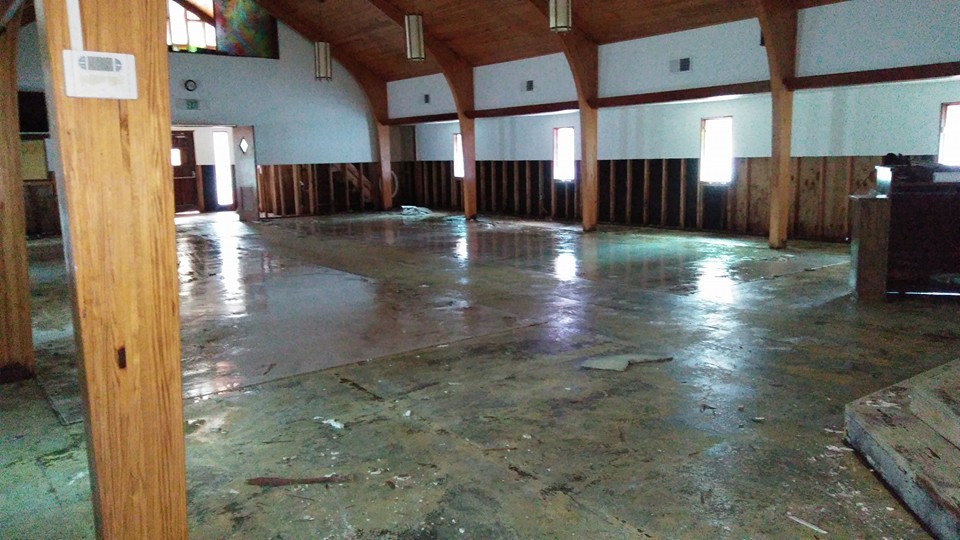 Volunteers tore out the carpet and drywall inside the Denham Springs Church of Christ auditorium. (PHOTO PROVIDED)Forced to focus on their own homes, the Abbotts and members of the Denham Springs church put a note on Facebook, asking for help to clean up their building. They were grateful when members of churches from nearby communities volunteered to help out — tearing out drywall and carpet.

“One of the worst hit areas, they’re all bad, but the Denham Springs area, I’ve never seen anything like that,” Dennis McClintock, associate director of the Churches of Christ Disaster Relief Effort, Inc, told The Christian Chronicle.

McClintock has been in the Baton Rouge and Denham Springs area for more than a week now. Many of those he’s met didn’t have flood insurance. Many found their homes filled with water almost to the roof. Now they’re hoping FEMA or other assistance programs will help them to make the needed repairs.

“I don’t see an end to this because there’s just so much devastation down here from this,” McClintock said. “Everybody’s lost pretty much everything.” 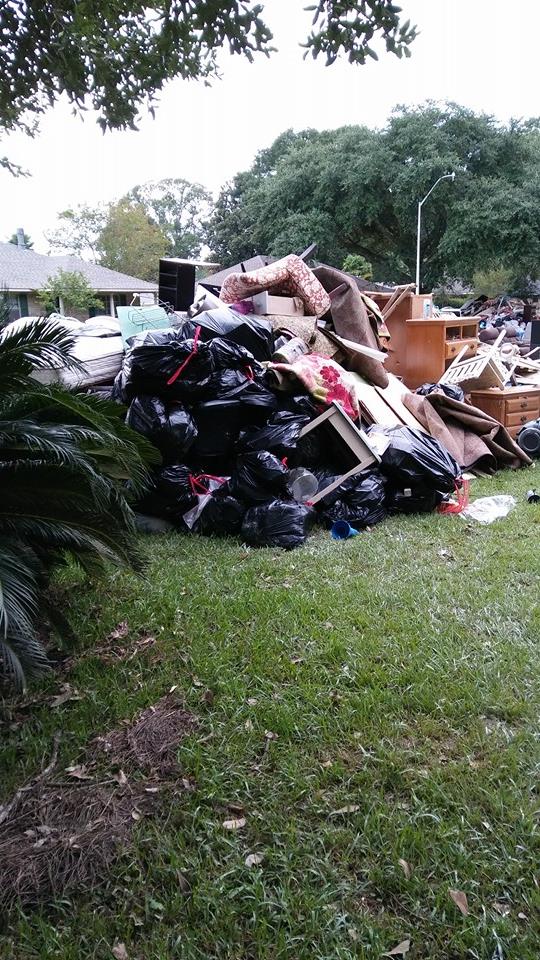 A pile of debris sits along the curb in front of the Abbott’s home. (PHOTO BY SHERRY ABBOTT)
Streets in town are now lined with huge piles of debris as people work to clear out their homes. Trucks with large claws are making their way through the hardest hit areas picking up the piles and taking them to a dumping site.

“There’s members coming in that have lost everything,” Abbott said.

One woman, he said, had just lost her father a few days earlier. Then, the floods took her home and her mother’s home. As he told the story he paused, overcome with emotion.

Many are calling, emailing, asking what they can do to help.

“The biggest thing I’ve been telling people’s plastic containers or tubs. People are going through and cleaning out their homes but they don’t have anything to put it in,” Abbott said.

Local stores are selling out of tubs and fans as quickly as they come in, he said. Those items are essential for packing up belongings and drying out homes.

The help those in the area are getting is making a difference.

“Everyone is so thankful to be alive and most of them seem encouraged by all of the help they are receiving,” Heather Fowler, a volunteer and member of the Goodwood Boulevard Church of Christ in Baton Rouge, said. “Whether it’s food, water, cleaning supplies, or physical help in their homes, everyone is working together.”

A quilt Sherry Abbott was able to save from her home after the flood. (PHOTO BY SHERRY ABBOTT)With more than 60,000 homes damaged, according to Louisiana state officials, the cleanup will not be over soon.

Many disaster recovery groups are in the area. McClintock said he is working with 13 churches in the area to get supplies to those in need, everything from food, to clothing, to furniture. Other agencies, including Disaster Assistance Mission, Churches of Christ Disaster Response Team, The White’s Ferry Road Church of Christ Relief Ministry and Christian Relief Fund are also working with churches in the area to provide meals and other needs to victims. Each group is promising to be there for an extended amount of time, making sure they can help as many people as possible.

Relief workers say while any type of donation would be welcome, money actually will make the most difference. Volunteers are also encouraged to contact the different relief organizations or churches to see how and where they can help.

Thanks to the volunteers who helped at Denham Springs the church building has been cleared out. The auditorium is currently being used as a place for some to store their belongings while they work to repair their homes.

The Denham Springs church family is grateful for the help. They know it will take a while for everything to return to normal but they are doing their best to stay strong.

“It is a little overwhelming but with the Lord’s help we will not be overcome,” Abbott said.