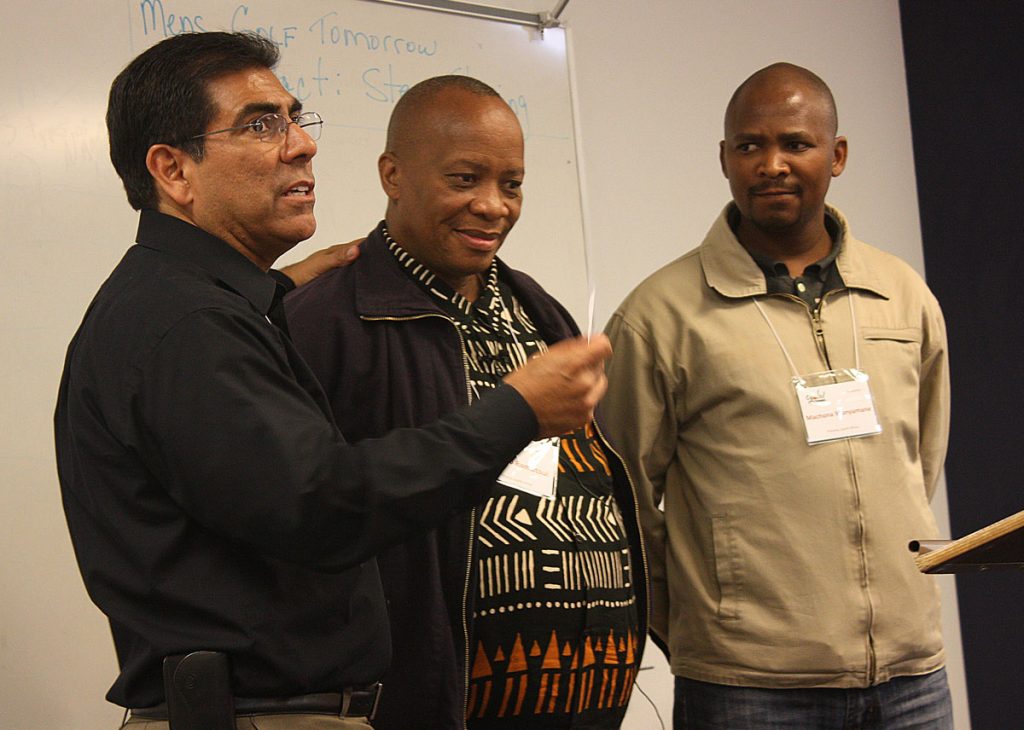 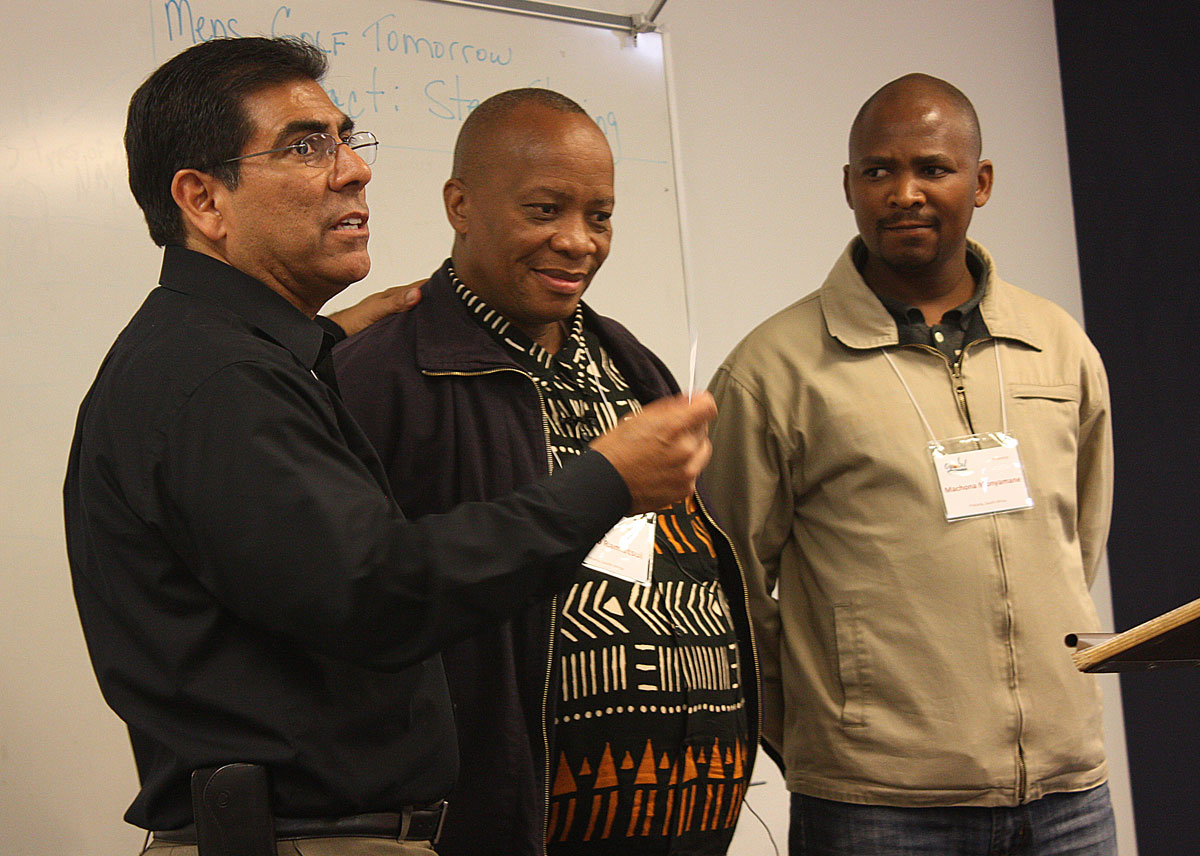 Daniel A. Rodriguez, left, of Pepperdine University talks about indigenous-led ministries after Tebogo Ramatsui and Machona Monyamane conclude their talk about their work in South Africa at the Global Missions Conference. (Photo by Erik Tryggestad)

Blogging live from North Richland Hills, Texas
I’m here covering the third Global Missions Conference, a meeting of mission-minded Christians from around the globe that happens every three years in the Dallas/Fort Worth area.
The collaborative effort of Churches of Christ is coordinated by Missions Resource Network. This year’s conference also is serving as the annual World Mission Workshop for university students. The Legacy Church of Christ hosts the event, which continues through Saturday, Oct. 22.
I always enjoy finding the “hidden gems” at conferences  — the presentations that don’t have top billing or well-known names but are extraordinary nonetheless.
Take Tebogo Ramatsui and Machona Monyamane, for example.
Their names don’t exactly roll off the tongue. They are ministers for a Church of Christ in Pretoria, South Africa. (I first met Ramatsui years ago at a ministry training program for African church leaders hosted by the River Road Church of Christ in Albany, Ga.) The title of their presentation was “Urban Missions in the Global South.” That got my attention because of The Christian Chronicle’s ongoing “Global South” series.
The ministers talked about their church’s outreach effort to provide home-based care for people suffering from AIDS. The church also has an active prison ministry. In addition, this African church sponsors mission work in India and Cambodia. 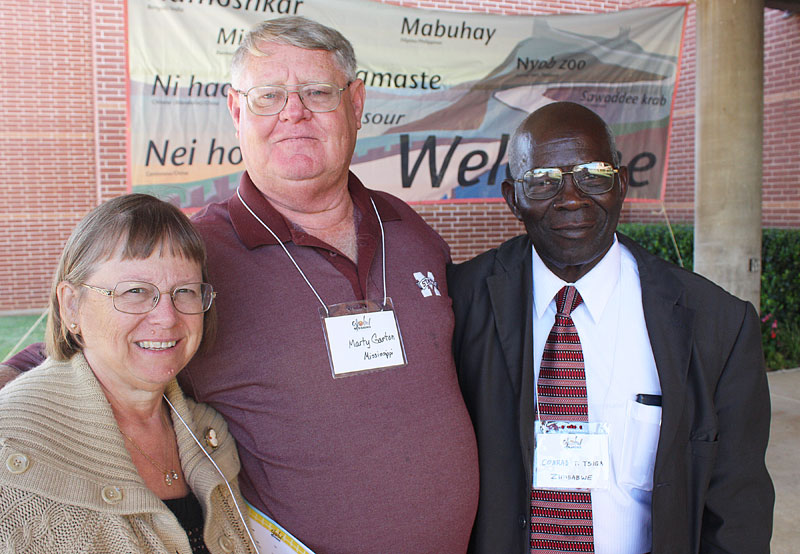 Monyamane talked about the role of Africa’s urban churches in reaching people from across the continent — and then sending them back home with the Gospel. He likened the work of urban churches to that of the Holy Spirit on the day of Pentecost. About 3,000 people were baptized in the big city of Jerusalem, and from there they planted new churches throughout the ancient world.
“That is the plan God had for a global mission,” Monyamane said.
In between sessions I got to meet Conrad T. Tsiga, a man I had heard about for years but never met. Tsiga has preached the Gospel since 1964 in the African nation of Zimbabwe. He currently ministers for a Church of Christ in Seke, Zimbabwe. 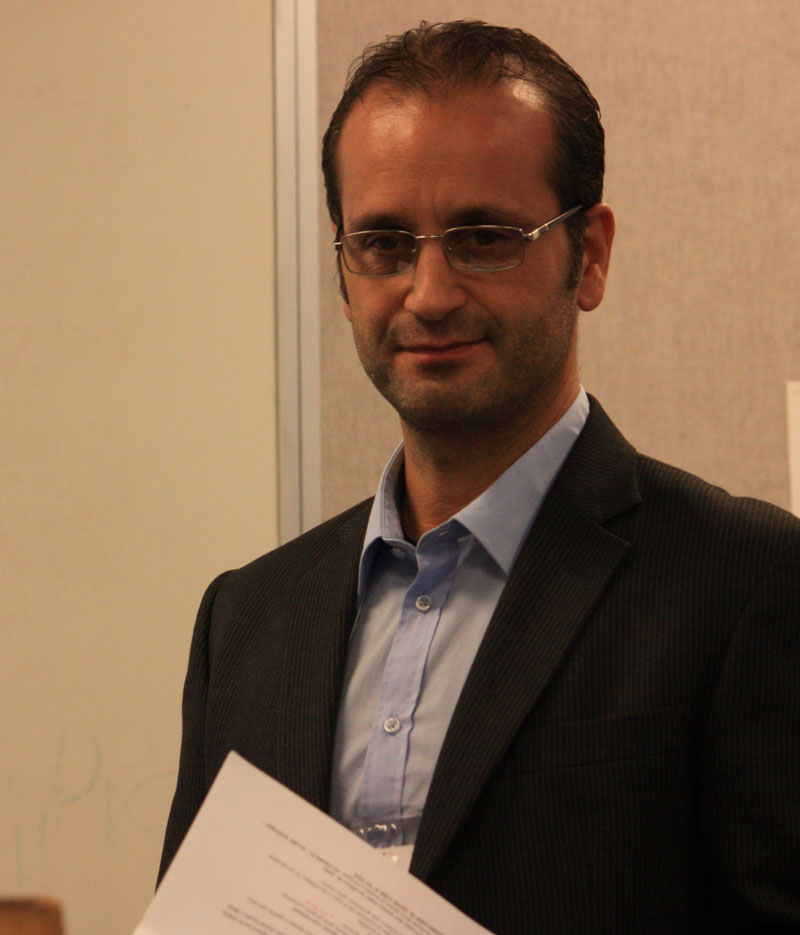 Franco Verardi, a vocational minister in Italy, talks about his ministry at the Global Missions Conference. (Photo by Erik Tryggestad)

Later, I sat in on a session presented by Franco Verardi, an Italian minister who works with Churches of Christ in the southern Italian cities of Taranto, Mesagne and Torre Santa Susanna, Italy. Verardi also has done mission work in Cambodia and works with youth camps in Italy and Albania.
Verardi is a tentmaking, or vocational, minister. He paints houses to support his work. During his talk, he referenced the apostle Paul’s work making tents, as recorded in Acts 18, where the term “tentmaking” comes from.
“The greatest preachers have always had two jobs,” he said. “Even Jesus was a carpenter.”
While he talked about the specific mission fields where he works, he stressed that “every heart without Christ is a mission field.” 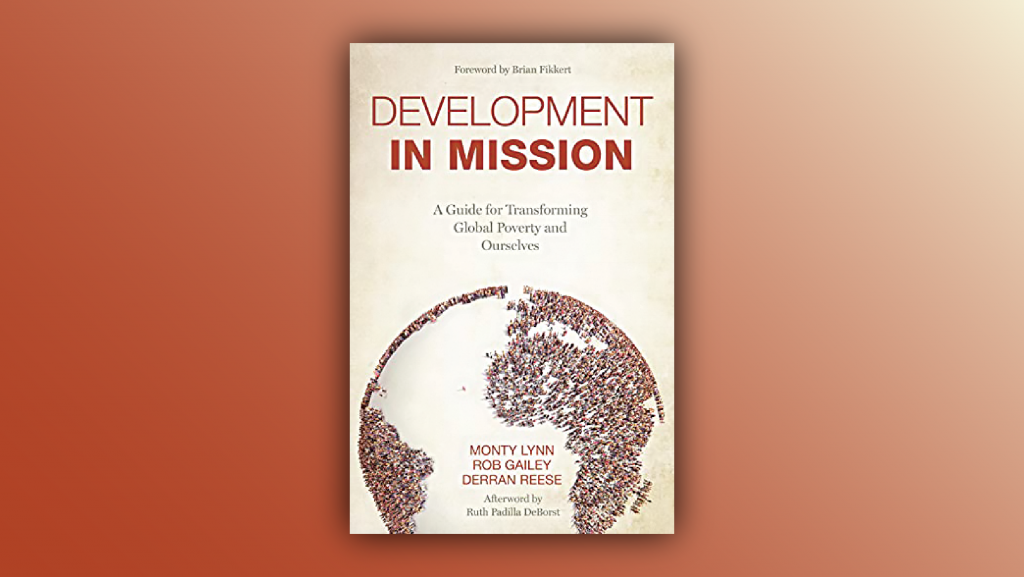 Learning to partner with God through holistic missions

Isaiah 58:6-7 is a passage that we seldom associate with…