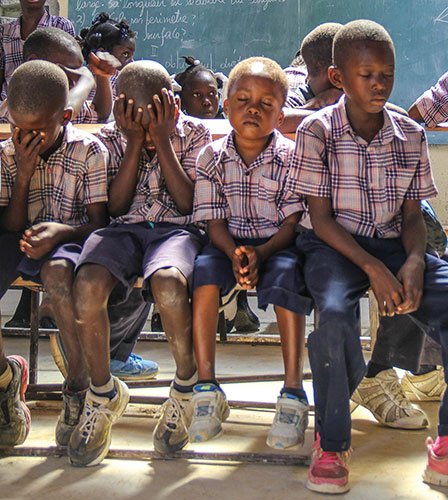 In a land beset by earthquakes, crime and uncertainty, Christians focus on transforming one child at a time

Erik Tryggestad
President and CEO
Rocks in the water cannot comprehend the misery of rocks in the sun.

The constitution is paper. Bayonets are steel.
— Haitian proverbs

PORT-AU-PRINCE, Haiti — Blue helmets and rifles flash past the windows of an old yellow school bus with “Hope for Haiti’s Children” written on its side.

The armored convoy is a show of force by the United Nations, here to monitor Sunday’s round of elections.

Violence at polling stations marred the previous round. That won’t happen again, the government has vowed.

More than 40 Haitians are running for president — and more for the national assembly. They’ve all been assigned numbers. Handbills plastered on the city’s cinder block walls urge voters to choose No. 10, 31, 82.
Like the posters, Haiti’s problems are plentiful and hard to miss. 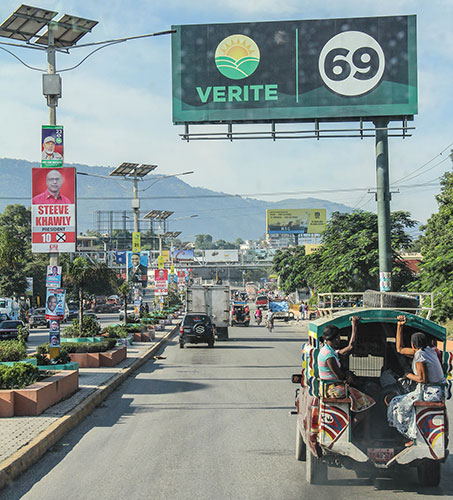 Nearly six years have passed since “la tranble” — “the shaking” in Creole. The Jan. 12, 2010, earthquake claimed more than 230,000 lives and left 1.5 million homeless. Walls are rebuilt, their tops plastered with translucent green shards from broken bottles to keep out thieves. Crime and gang violence are daily realities.

Even elections are dangerous.

Rocks in the sun.

Much harder to see is the Cazeau Christian Elementary School. The school bus driver, Pascal Oreste, swerves from the traffic-clogged main road to reach it, at the end of a narrow alleyway up a steep hill. Maneuvering the bus through impossibly tight turns, he pulls up to the gate just in time for the morning flag ceremony. 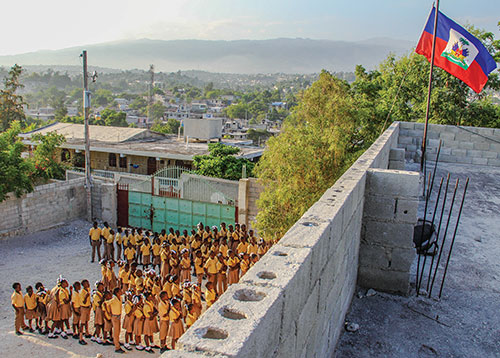 The bus riders, from Churches of Christ in Ohio, Oklahoma and Texas, unload as children in mustard-yellow and khaki uniforms salute the Haitian flag. They also pray.

Ken Bever, director of Hope for Haiti’s Children, gives certificates to the students who have excelled at Scripture memorization.

For the U.S. church members, the school is the first stop on a tour of works supported by the nonprofit, founded by Bever and his wife, Rhonda, as a joint ministry of the Connecticut Valley Church of Christ in Windsor, Conn., and the Delmas 28 Church of Christ in Port-au-Prince.

Florlencia Joseph, a student at the Dubisson Christian School, recites John 3:16 in Creole after receiving an award for Scripture memorization from Hope for Haiti’s Children. Related story: https://www.christianchronicle.org/article/finding-haiti-s-hidden-hope

Posted by The Christian Chronicle on Tuesday, December 1, 2015

The Bevers, now members of the Northeast Church of Christ in Cincinnati, first traveled to Haiti in 1993 and saw scores of children unable to attend school. They launched Hope for Haiti’s Children in 1995. The ministry’s operating arm is now a non-governmental organization. Jeantyrard Elmera, minister for the Delmas church, oversees Haiti operations.

In the past 20 years, the ministry has helped establish and fund the construction of 10 Christian schools, enrolling more than 2,500 children. U.S. sponsors pay tuition for 1,440 of them.

Cazeau, a 197-student school with students from pre-kindergarten to sixth grade, has a nearly 100 percent pass rate on Haiti’s national exams, compared to 40 percent in the country’s overcrowded public schools. The facility also includes a children’s home for 36 boys and 36 girls, ages 5 to 17. 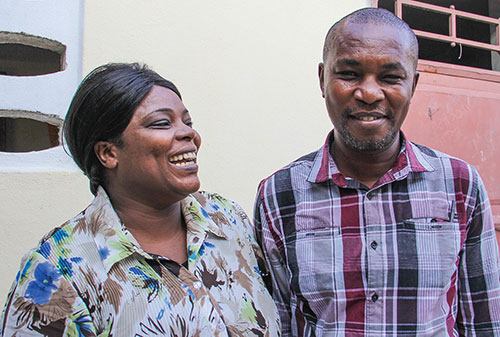 “We’ve got a special goal — to give these kids a good education and to share the Word of God with them,” says the principal, Beatrice Chery, speaking in Creole as her husband, Jean Baptiste, translates. Jean Baptiste Chery is a minister and the nonprofit’s vice president for Haiti operations.

The principal prays that the students will “see their country change” for the better.

“With God we can make things happen,” she tells them. “We need God to continue to help us.”

An empty sack can’t stand up.
If it is God who sends you, he’ll pay your expenses.
— Haitian proverbs

Nourishing children physically and spiritually, empowering them to serve as leaders and develop their country, is a goal for the nonprofit. That means meals, Bibles and schoolbooks for the students and orphans.

Students pray at the Dubuisson school, supported by Hope for Haiti’s Children. (PHOTO BY ERIK TRYGGESTAD)
Dyna Edouard, a teacher at the Cazeau school for eight years, oversees its new computer club. Even the early grades get experience scrolling and clicking as they learn math and practice English.

“All of my students, they are so amazing, so smart,” she brags. “I know they have faith in life and faith in God.”

She worries about them after they leave — especially the orphans. The country’s unemployment rate is 70 percent, according to some estimates. Even a good education doesn’t guarantee a good job.

Posted by The Christian Chronicle on Tuesday, December 1, 2015

“I worry about them finding a place to live,” Edouard says, “but I really hope that they keep on trusting in God.”

Dieuvela Jean Pierre, 19, is one of the students sponsored through the nonprofit. Her day begins at 4 a.m., when she rises to catch one of the colorful “tap tap” buses for the 25-minute ride to school, assuming the traffic is good. It rarely is. 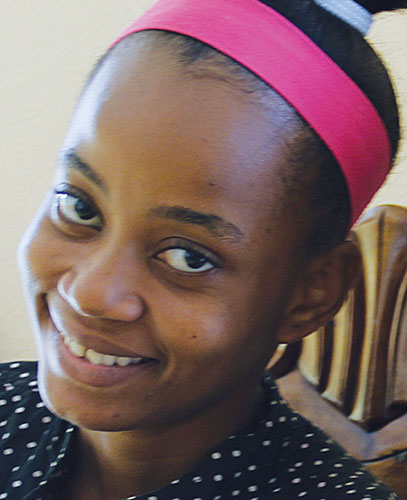 Dieuvella Jean Pierre
“If you go after 5:30, it’s too crowded, and you have to walk,” she says, and she wants to be there in plenty of time for her 7 a.m. class. She’s thankful for the support she receives to pay her school fees, and she hopes to become a physician. Her country needs Christian doctors, she says.

Sonja Toussaint has served as a caretaker for the Cazeau orphanage for seven years. Many of her children succeed. Some don’t. A few go to the U.S. to study or the Jamaica School of Preaching and Biblical Studies.

Some now serve as administrators at other schools launched by Hope for Haiti’s Children.

“Our hope is different from non-Christians,” she says. “When we work at doing a good thing, not only is our conscience safe, (but) God can take whatever we’re doing and bless it.”

On election Sunday, after two days of visiting schools and orphanages across the region, the U.S. Christians worship with the Thomazeau Church of Christ, 90 minutes northeast of Port-au-Prince. So far, there are no reports of violence from the capital. 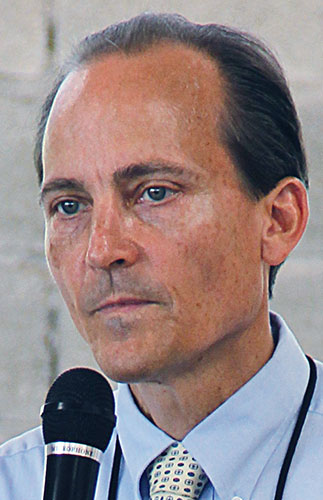 “Satan tells lies. The big lie is that if you’re God’s children, nothing bad will happen,” Bever preaches to the 100 or so souls assembled under a brand new pavilion on the 25-acre campus, also home to an elementary school and an orphanage serving 12 children.

In the children’s Bible class — packed wall to wall with children in polo shirts, pillowcase dresses and hair bows — Marieshelle Joseph teaches about the miracles of Jesus. 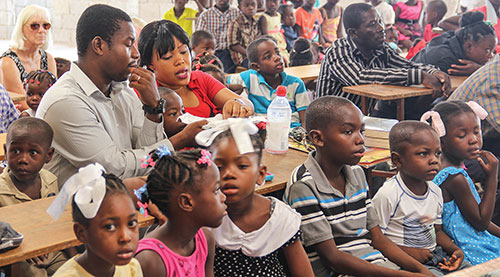 Johny and Marieshelle Joseph takes communion during Sunday worship at the Thomazeau Church of Christ in Haiti. (PHOTO BY ERIK TRYGGESTAD)

Joseph works with Hope for Haiti’s Children as an office administrator and helps coordinate groups of U.S. volunteers when they visit.

Raised in Gonaives, Haiti, she moved to Port-au-Prince not long after a flood devastated her hometown in 2008. Two years later, the earthquake nearly obliterated her new home. But she found faith at the Delmas 28 Church of Christ. She was baptized and taught in the school there, also sponsored by Hope for Haiti’s Children.

“Kids who could barely talk and failed first grade are now thriving,” she says. Once neglected and withdrawn, they’ve become jubilant, academic aces.

She prays that these small steps will lead to better lives — in the now and in the hereafter — for Haiti’s future generations.

“I do see hope,” she says, “because without hope there is no living … no life.”

Thank you song in Creole, Dubisson Chrsian School, HaitiPosted by The Christian Chronicle on Tuesday, December 1, 2015 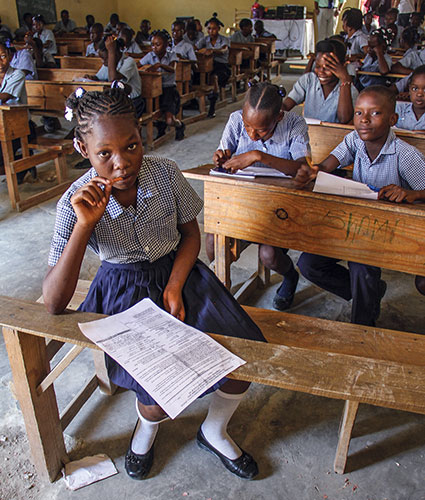 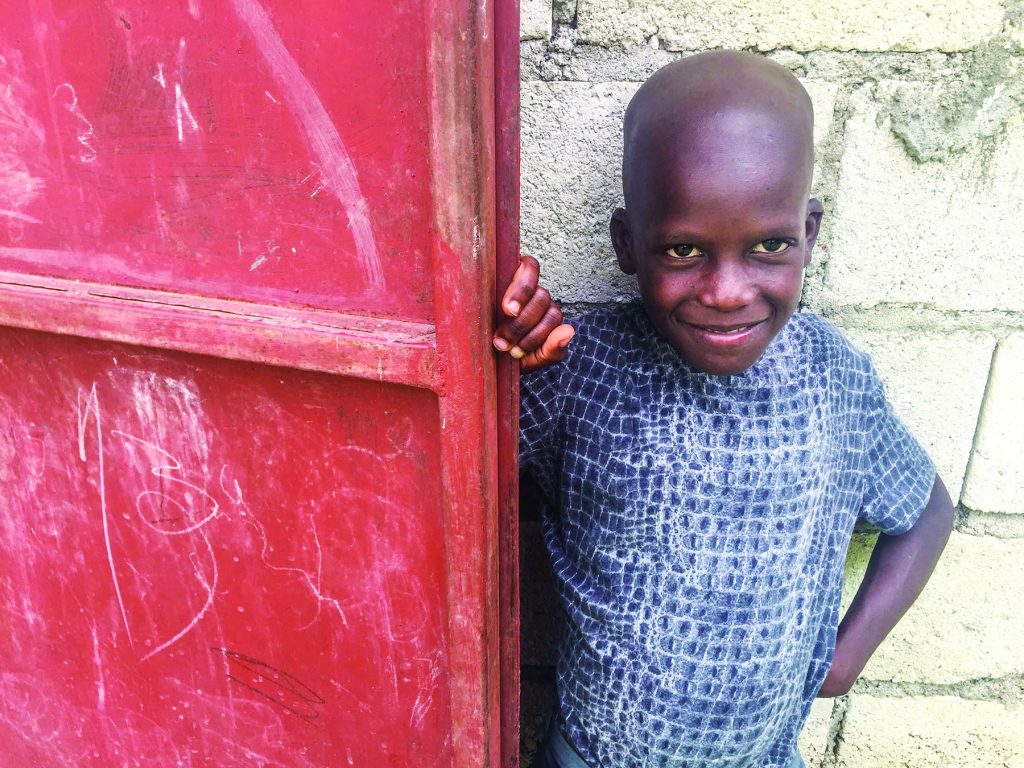 Our poverty challenges us to cling to God

Thomazeau, Haiti— I thought I knew exactly what poverty looked like. I…