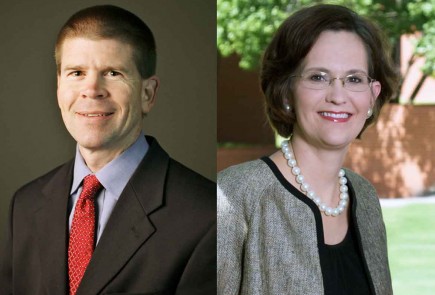 Staff reports
OKLAHOMA CITY — A national search committee has named two finalists to succeed Oklahoma Christian University President Mike O’Neal, who will retire at the end of the academic year.
Both candidates, John deSteiguer and Allison Garrett, already serve as senior vice presidents for the 2,200-student university.
DeSteiguer is senior vice president for advancement. He was recruited to Oklahoma Christian in 2002 as part of O’Neal’s new administration.
At the time, deSteiguer was a senior development officer at Northeastern Oklahoma State University. He brought his fundraising acumen, leadership gifts, passion for higher education and love for students and over the next decade helped the university raise gifts topping $100 million, the search committee said.
Garrett is senior vice president for academic affairs. An Oklahoma Christian alumnus with two law degrees, Garrett came to work at her alma mater in 2007 after serving on its board of trustees and as a law professor at Faulkner University in Montgomery, Ala.
Her professional experience includes a decade with Wal-Mart Stores Inc. in Bentonville, Ark., where she served as vice president of benefits compliance and planning, vice president and general counsel, corporate division, and assistant secretary. She oversaw large staffs and had budgetary responsibility for more than $550 million.
For more details on the candidates and the search process, see www.oc.edu.