Christians gather in once-communist Slovakia to discuss the challenges and opportunities on their diversifying continent.

BRATISLAVA, Slovakia — “I’m worried about our continent,” Robert Limb said of Europe. “The light might have departed. It might be too late.”

The British-born minister for the Moulin-Vert Church of Christ in Paris describes himself as “English by chance, French by choice” and “Christian by conviction.” He has labored tirelessly for decades in a Europe increasingly described as “post-pretty-well-everything,” he said. “Postmodern. Post-Christian. Past the post.”

“It’s almost as if we live in a civilization which knows it’s dying,” he said. “And at the same time, there are reasons to hope. And God has placed us here.” 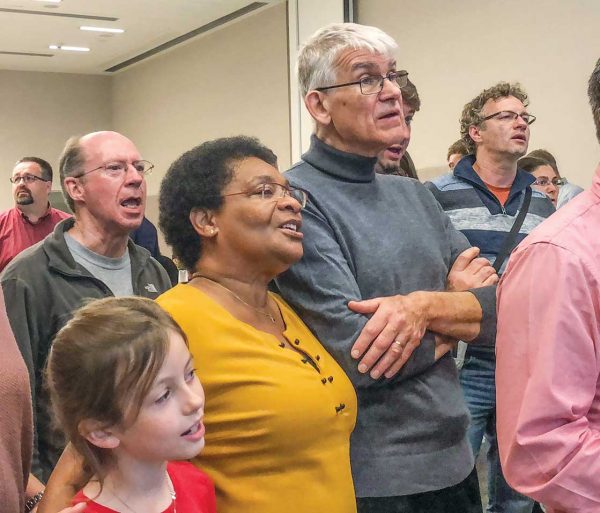 Robert Limb and his wife, Evelyne, sing along with worship leader Keith Lancaster in Bratislava.

Limb spoke to a room full of ministers, ministry leaders and church members during the second European Vision Workshop.

About 125 Christians, representing 59 Churches of Christ in 19 nations, met for the four-day event in the capital of Slovakia, about 45 minutes east of Vienna, Austria. Such a gathering likely would have been impossible 30 years ago, when Slovakia was part of communist Czechoslovakia.

Much has changed in Europe in those three decades. As the Soviet Union fell, missionaries rapidly planted Churches of Christ in Slovakia, Romania, Albania, Ukraine and Russia, to name a few. That work has slowed in recent years.

Meanwhile, many European nations report declining birth rates — below the replenishment level needed to avoid population decline without migration — and plummeting church attendance. Add to the mix a massive wave of refugees from the troubled, predominantly Muslim nations in the Middle East.

But amidst the continent’s consternation, Christians here see divine opportunity. 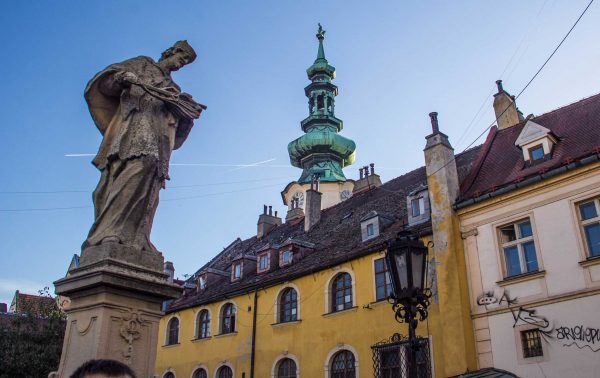 The workshop had its genesis in Athens, Greece, near the epicenter of the refugee crisis. In 2016, four ministries associated with Churches of Christ — Partners in Progress, Sunset International Bible Institute, World Bible School and World English Institute — hosted a gathering of European church leaders to equip them to minister to asylum seekers in their countries. Many of the refugees are spiritual seekers and were members of secret house churches in the Middle East, forced to flee because of their newfound faith in Jesus. 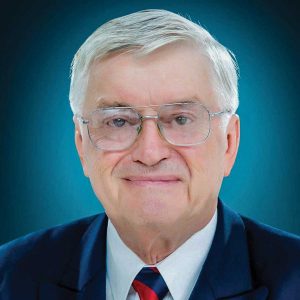 “Living a pure, Christian life is not the Gospel. You’ve got to talk to people,” said Bill McDonough, director of Partners in Progress. He urged workshop participants to have intentional, daily conversations about Christ and to work together. “You’re not a lone ranger,” he said. “You don’t have a diocese you’re trying to control.”

After the Athens event, Bill McDonough of Partners in Progress approached Doug Reeves of Sunset about partnering in a similar workshop with an expanded focus. The four ministries launched the first European Vision Workshop in Mainz, Germany, in 2017 to help Christians reach all Europeans — including those who claim they have lost their faith, be it Islam or Christianity.

In fact, Limb said, “what they have lost was not a true relationship” with God.

During the Bratislava conference, Limb and fellow ministers spoke on the theme, “Lift up your eyes and see God’s purpose in Europe.”

Limb quoted from one of his favorite hymns, “Glorious Things of Thee are Spoken,” written by John Newton in 1779, a decade before the French Revolution.

“‘La Marseillaise’ is a good tune, but that’s my national anthem,” he said of the hymn, focusing on the lyric, “With salvation’s walls surrounded, thou may’st smile at all thy foes.”

It’s up to God to judge the righteous and the unrighteous, he added. Meanwhile, “we look at our neighbors and say, ‘Come in. Don’t be an enemy anymore. We’re not going to fight you. We’re going to love you to death.’” 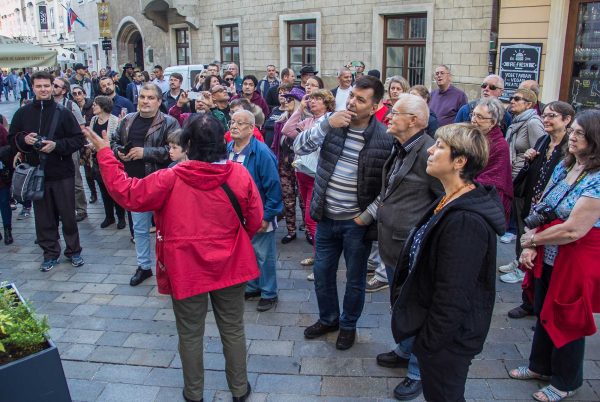 ‘WE NEED TO PREPARE THE FIELDS’

As the workshop began, representatives of Churches of Christ in Austria and Germany gave updates on their work with refugees from the Middle East. Many seek asylum in these countries after entering Europe through Greece or the Balkan nations. 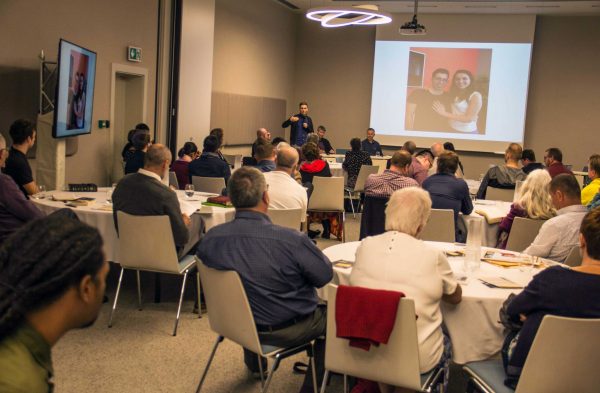 Christians in Vienna feed and serve as many refugees as they can while they can, Kooi said, but often that’s not long. The European Union’s policies and other factors can take the refugees away quickly, leaving church members asking, “Did we do enough? Did we say the right thing?” 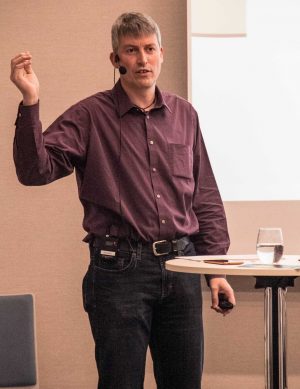 After his presentation about serving refugees, Rudiger Renken teaches a class on faith-based parenting, focusing on raising boys.

Refugee ministry requires “trust that God will take care of it.”

It also requires preparation, said Rudiger Renken, a member of the Bremen Church of Christ in Germany. The congregation of about 35 souls has served hundreds of refugees with food, shelter and Bible studies.

“God is working, but we need to prepare the fields,” said Renken, a graduate of Sunset International Bible Institute. “We need to prepare ourselves for having a Bible study. … Why should God send us people if we’re not prepared?”

‘MUSLIMS IN YOUR GROCERY STORE’

While many Middle Eastern refugees claim Christianity as their faith, many more are Muslims who “have never been as disenchanted with Islam” as they are now, said Wissam Al-Aethawi during a session titled “Islam in Christ’s Eyes.” 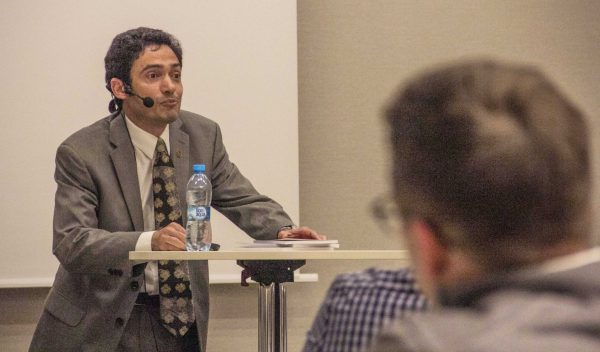 Wissam Al-Aethawi speaks about “Islam in Christ’s Eyes” during the workshop.

A native of Iraq, Al-Aethawi was a refugee himself after he studied the Bible and was baptized in a hotel bathtub near the birthplace of Saddam Hussein. Now he serves as a missionary to the heavily Arab population of Dearborn, Mich., and as assistant dean of Arabic studies for the Sunset institute. 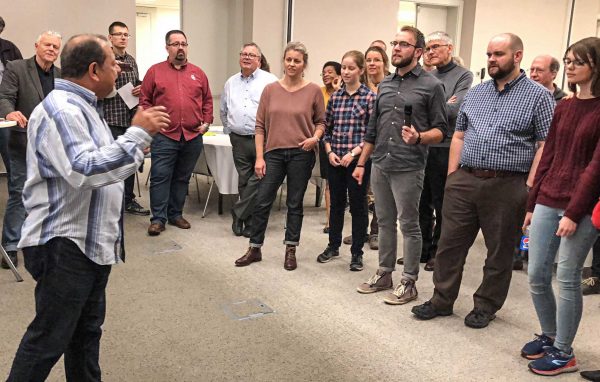 “If you cannot stand to see Muslims in your grocery store, don’t share the Gospel with them,” said Al-Aethawi, who also stressed the need for Europeans to learn about their Muslim neighbors’ faith and their holy book, the Quran, as they reach out with Christ.

“To learn about Islam, you have to go to the Quran,” he said, “and not your favorite politician.”

Increasingly, Europe’s politicians voice opposition to the wave of refugees from the Middle East, which has slowed substantially in the past year, the International Organization for Migration reports.

Several countries, including Hungary, have fortified their borders and heavily restricted access by refugees. Political parties that advocate a crackdown on refugees have made substantial gains in parliaments, including Sweden’s, as anxieties grow over national identity and the effects of globalization and immigration, Reuters reported in September. 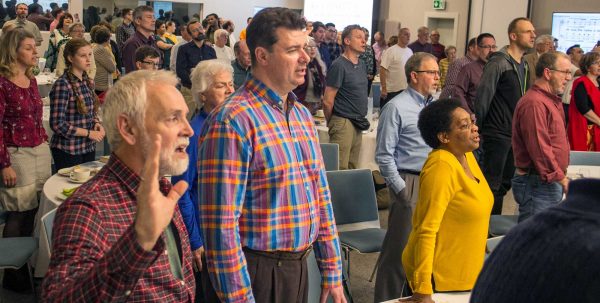 Paul Brazle, far left, sings hymns along with workshop participants. “We spend a lot of time trying to straighten out folks,” said Brazle, a longtime missionary to Antwerp, Belgium, during a devotional. He quoted Mark 9:38, in which Christ’s disciples tried to stop a man from driving out demons because “he was not one of us.” “Don’t make a church that looks like me,” Brazle said. “Make a church that looks like Jesus.”

In the east German city of Chemnitz, anti-immigrant protests erupted after an August brawl that resulted in the stabbing death of a German man. Police named immigrants from Syria and Iraq as suspects.

Media pundits pointed to the protests as evidence of backlash against the refugees, but failed to acknowledge the larger counter-protests by those who support the asylum seekers, said Sven Schneider, a member of the Chemnitz Church of Christ who attended the workshop.

Members of his church have worked with relief organizations that help refugees and play sports with their children, Schneider said. At least one baptism has resulted from the outreach.

“… sometimes in our anxiety for church growth we forget that trees that take the longest to bloom have the most fruit.”

The refugees, like most Europeans, are in search of a better life, said Teresa Rothe, a member of the Chemnitz church who was baptized last year. They quickly learn that “Germany is not heaven” and that prosperity is “not just given to you.” Many asylum seekers become frustrated. Some also bring their old conflicts to their new homeland. That makes some Germans feel uncomfortable and insecure.

Rothe prays that the refugees will find the peace that she found as she studied the Bible with the Chemnitz church. 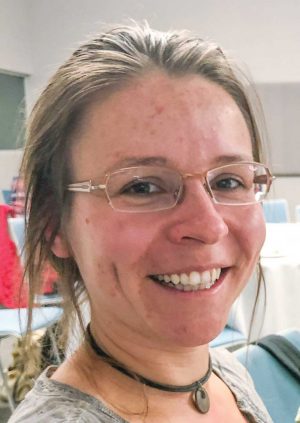 “When it’s about truth and about God, all of that background doesn’t matter,” she said. “The truth is for everyone.”

Alexander Bartsch, an evangelist for the church, said that Christians should endeavor to cut through the noise and distractions of politics as they minister to everyone — Iranians, Afghanis, Syrians, Africans and Germans.

“In a way, the church does politics,” he said, “but from a different realm. We are trying to change people from the inside. We proclaim a kingdom that is neither left nor right. It is simply from another world.”

‘I SENSE GOD AMONG THESE PEOPLE’

As a new believer from a small church, Rothe said, “I’m encouraged by seeing so many people trying to spread the Good News.” The offerings at the workshop were “a little overwhelming,” she added. 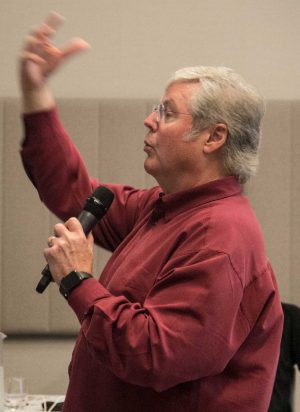 In addition to refugee ministry, speakers discussed challenges facing an increasingly secular Europe. One way to reach souls across a multitude of cultural and religious barriers is through the universal language of song, said Keith Lancaster of Acappella Ministries. He and his son, Anthony, taught the attendees new songs used in their Praise and Harmony workshops.

“We don’t want to do singing as just a checklist item,” Keith Lancaster said, noting that many church hymns are actual words of Scripture and hold biblical truths. “Although the primary mission of worship isn’t evangelism, if we worship with passion, people who hear us will say ‘I sense God among these people.’” 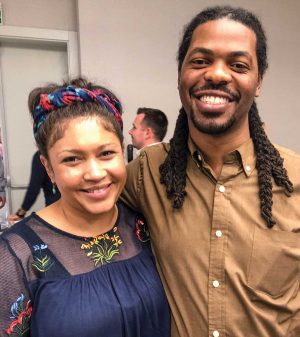 Jason and Patrice Williams sense God working in France, where they are working with a Church of Christ in Paris. Both native Texans, the couple is training with the Sunset institute. They are considering full-time mission work in the City of Light — despite the sticker shock when it comes to raising funds from churches in the U.S.

“To send us to Paris, they could send 10 people to Honduras,” Patrice Williams said. For that reason, plus the reputation of Europe as post-Christian, it’s hard to find potential teammates for the work, she said.

But the city of 2.2 million souls has spiritual seekers, she added. 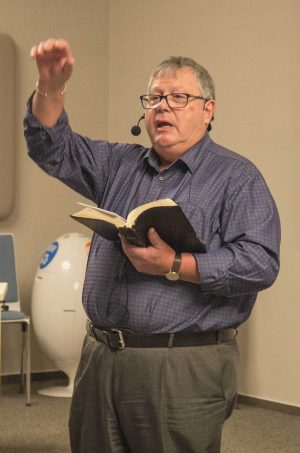 Trevor Williams delivers the final message of the workshop.

“It’s surprisingly easy to meet people who are open,” she said. “We make contacts in Starbucks. More workers are needed.”

As the workshop closed, Trevor Williams stressed the need for steadfast patience among Europe’s Christians.

“God moves in mysterious ways,” said Williams, a longtime minister in England and an editor of Christian Worker, “and sometimes in our anxiety for church growth we forget that trees that take the longest to bloom have the most fruit.

“It takes time, but a fruit tree, grounded well, can produce here.” 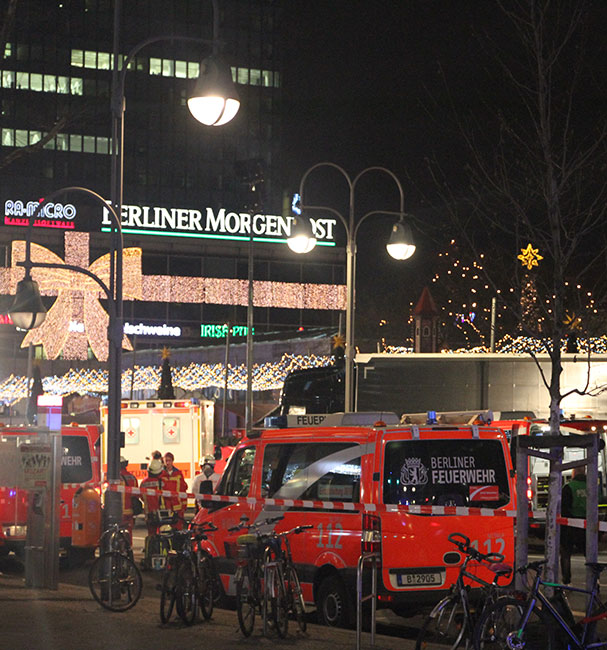 Christians across Europe and around the world pray and mourn… 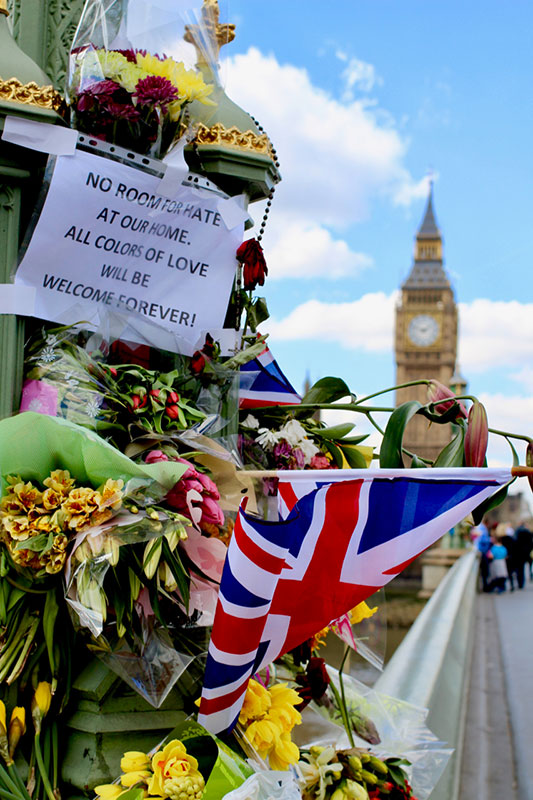 Today, people across the United Kingdom observed a minute’s silence… 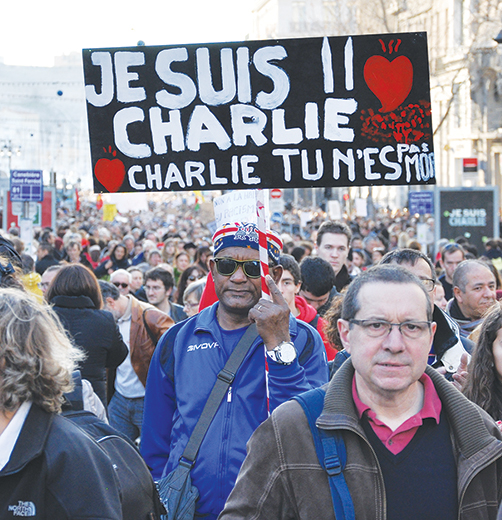