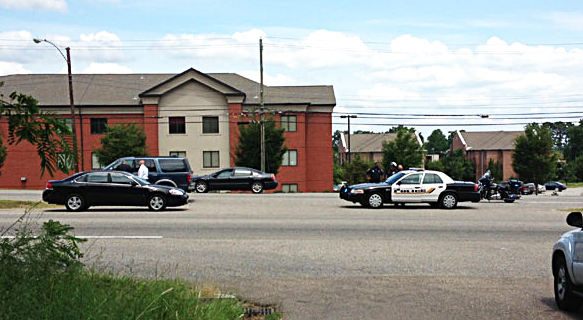 WSFA in Montgomery, Ala., reports:

Montgomery police at the scene of a shooting at Faulkner University on Atlanta Highway. (Photo via www.wsfa.com)

A little before noon Tuesday a shooting took place on the campus of Faulkner University located just off the Atlanta Highway in Montgomery. Authorities say the victim suffered life-threatening injuries and a suspect was later apprehended and arrested.
The suspect and victim have not been identified though authorities say they are a husband and wife and the shooting appears to be a domestic situation.

Read the full story.
The university released a statement after the incident:

A shooting occurred on our Montgomery campus today. The suspect has been apprehended and all offices and classes are operating on their normal schedules. In what appears to have been a domestic situation, a contract employee was injured in the shooting and has been taken to a local hospital for treatment. Her condition is not known at this time. The Montgomery Police Department is following up on the incident. At no time were any students involved in the incident. Faulkner University asks everyone to be in prayer for the victim and offers its sincere gratitude to campus security and law enforcement officers for their rapid response.