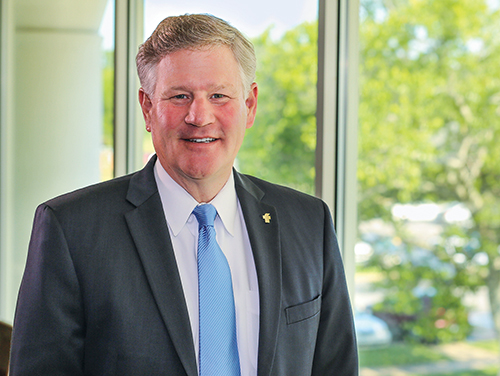 Faulkner’s new president on the days ahead

Lynn McMillon
President Emeritus
A lot of graduate students, no doubt, question whether or not anyone will benefit from the work they do as they pursue advanced degrees.

Michael D. Williams is living out his research.

While working toward a doctorate in education at the University of Pennsylvania, his studies “centered on presidential succession in faith-based colleges,” he told The Christian Chronicle.

On June 1, he became the eighth president of Faulkner University, a 3,500-student university in Montgomery, Ala., associated with Churches of Christ.

“Now, to have the opportunity to act on my research, training and experience is exhilarating,” Williams said.

Williams succeeds Billy D. Hilyer, who served as Faulkner’s president for 28 years. A graduate of Harding University in Searcy, Ark., Williams worked as an accountant before moving into higher education as director of admissions at Ohio Valley University in Vienna, W.Va.

As Hilyer began his presidency at Faulkner, Williams moved back to Harding, serving in roles including director of admissions, assistant vice president of enrollment services and vice president of advancement.

The number 28 has additional significance for Williams. It’s the number of years he and his wife, Lisa, have been married. The couple has two sons, Quentin and Cade.
What attracted you to the presidency of Faulkner?

I sense a real anticipation for the future within the university community. The Faulkner family is very proud of their heritage.

However, the institution has genuine aspirations to broaden her sphere of influence. I want to be part of an institution that is forward-thinking and aspire to be creative and innovative as we attempt to impact this emerging generation.
What do you see as distinctive about Faulkner?

Faulkner has a remarkable commitment to student success. Faulkner’s mission statement states that “every student matters every day.” There are numerous testimonies of rich investments made in students by the faculty.

Another distinctive of Faulkner University is our law school. For decades, the law school has aspired to prepare attorneys to take their faith into the public square. Our efforts have been inspired by Faulkner emeritus board member Fred Gray, who has lived a life of faithfulness in America’s courtrooms.

In light of the recent decisions by the Supreme Court, we stand at an important crossroad. Faulkner Law School is uniquely positioned to be a salient voice for religious liberty in America.
Is Christian education relevant today?

We actually get to choose if Christian education is going to be relevant in today’s culture.

I believe that we have a unique opportunity to engage an extraordinary generation of young people. This emerging generation may be the first generation that believes in the priesthood of all believers. If we can join them in a discovery of what it means to live out Jesus’ teachings, Christian education will not only be relevant, but impactful.

We should measure the value of Christian education based on the contribution we make to improve the lives of impoverished people.  This emerging generation is fearless, with a real passion to serve. Christ-centered universities have the capacity to equip and inspire a revival in the church today.
What relationship to Churches of Christ will Faulkner have under your leadership?

I am deeply committed to maintaining Faulkner’s identity as an institution associated with Churches of Christ. I want to be very intentional in building pathways to the entirety of our fellowship.

Colleges are profoundly influenced by their decisions on human resources and enrollment management. These two decisions truly reveal our values.

If we are committed to maintaining our identity as an institution associated with Churches of Christ, it will be reflected in how we make these institution-shaping decisions.
What is the next great challenge for Faulkner?

We certainly live in challenging times. Many believers in Jesus Christ are marginalized in the public square. Some would even codify this era as “post-Christian.”

As the government seemingly becomes more regulatory, it poses some particularly significant threats to Christ-centered colleges. Our beliefs on the exclusive claims of Jesus, homosexuality and birth control position us in a vulnerable spot. We must be strong proponents of our religious liberty.

If these issues escalate further in the public debate, it makes our commitment to affordability, endowment and fundraising even more significant to reduce our dependence on government-funded student financial assistance.

It is disconcerting to think about the challenges that could emerge from an adversarial relationship with federal and state governments.

However, it strikes me that the Kingdom of God was revealed to a people who never experienced democracy. They received the Word of the Lord in bondage. They were slaves with no political currency.  And yet they were called to change the world. In the first chapter of Acts, we read where they received the power of the Holy Spirit to bring about the impossible.

There is no way to predict the future regarding our receipt of federal and state funding. However, I do know that we are fueled by the same power of the Spirit to advance the Kingdom of God.