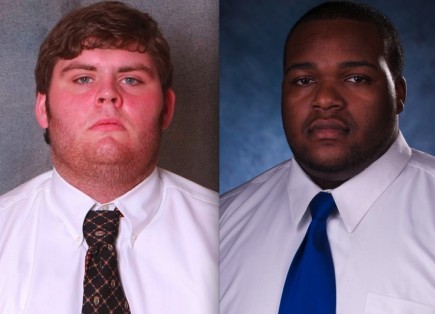 Staff
Faulkner University is mourning the deaths of two of its student-athletes in a car accident early April 21.
Teirson Hollis, 20, and Ryne Wilhite, 19, both sophomores on the Eagles’ football team, died instantly when their car struck an 18-wheeler on Highway 82 in Chilton County, Ala.
Wilhite was driving when the crash happened at 5:10 a.m. just outside Maplesville. The two were returning to Montgomery after visiting a friend in Tuscaloosa.
Alabama State Troopers are investigating.
“I’ve never been through anything like this — it hurts so much,’’ Faulkner head coach Gregg Baker said. “T and Ryne were both great kids, two wonderful Christian young men. The only thing that is helping us right now is the fact that we all know exactly where they are, and that’s with our God in heaven.’’
Hollis and Wilhite were both offensive linemen for the NAIA-affiliated university, with Hollis having been with the program since its inaugural season in 2007. Wilhite had just transferred to Faulkner this semester and went through his first spring practice last month.  Hollis, a native of Douglasville, Ga., played high school football at Robert S. Alexander High School. A native of New Albany, Miss., Wilhite played for Northeast Mississippi Community College last season.
The Faulkner University Athletic Department created an online memorial for the two players. A black ribbon with the Eagles logo is shown with their player photos.
“Both of them were always smiling and joking around,” Baker added. “They may no longer with us here, but T and Ryne will always be a part of this program. Always.’’
Flags on the Faulkner campus were flying at half-staff by mid-day. The Faulkner football team was informed of the players’ deaths by Baker and his staff Tuesday morning. Simultaneously, Faulkner president Billy D. Hilyer informed the rest of the student body, faculty and administration. Grief counselors are available to everyone on campus.
“This is a very difficult day for our family,’’ said Hilyer, who also addressed the football team Tuesday. “My primary mission on this campus is to be there for our students and to help provide them what they need to earn a quality Christian education. In many ways, they are like my children. And this just breaks all of our hearts. The message that it should send to everyone is just how much we need God, who we know also lost a child. And it’s the blood of Jesus that we embrace today.’’
A memorial service was held on April 27.