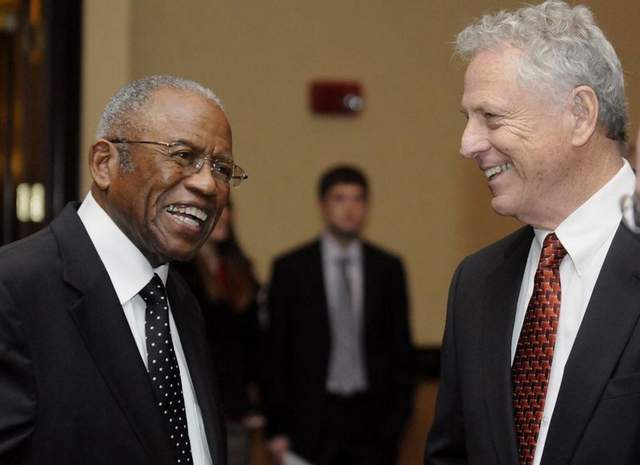 The accolades keep pouring in for civil rights attorney Fred Gray, a longtime elder for the Tuskegee Church of Christ in Alabama.

Fred Gray and Morris Dees of the Southern Poverty Law Center attend a dinner to honor Gray on Thursday at the Embassy Suites in Montgomery. (Photo by Amanda Sowards, Montgomery Advertiser, via www.montgomeryadvertiser.com)

People honoring civil rights attorney Fred Gray — who rep­resented the Rev. Martin Luther King Jr. and Rosa Parks and won landmark cases — during a dinner Thursday, repeated his own goal of finding everything segregated and destroying it.
The diverse crowd that hon­ored Gray in downtown Mont­gomery was evidence of his legacy. The Jones School of Law at Faulkner University hosted the din­ner and is host­ing the Fred Gray Civil Rights Symposium today.
U.S. District Judge Myron Thompson said that if he had a title for Gray it would be “the Legal Black Moses.” He said Gray parted the waters so that everyone could enjoy the other side.

Read the full story.
Also this week, the Christian Scholars’ Conference at Lipscomb University in Nashville, Tenn., announced plans to honor Gray.
The conference will confer an honorary doctorate upon Gray this summer “in recognition of his remarkable achievements in civil rights legislation, the defense of Rosa Parks, Martin Luther King, Jr. and the Tuskegee Airmen, and for his life long devotion to Christ and His church,” CSC director David Fleer said.
For more background on Gray, read this 2008 Christian Chronicle interview with him and this 2005 Chronicle story on Gray’s reflections after Parks’ death that year.