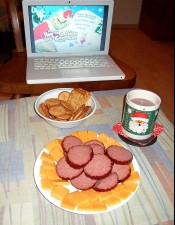 Far from home for the holidays

Serving the Lord in a foreign field can be all the lonelier during the holidays.
This year, missionaries on three continents intend to battle the Christmas blues the same way — with a south-of-the-border fiesta.
In Guatemala, Kemmel and Lisa Dunham will join the families of their coworkers in the Central American tradition of eating tamales.
In Germany, Kyle and Susan Bratcher and Don and Cindy Roehrkasse will join families from the U.S. and Sweden for the not-so-German tradition of a Mexican dinner. They’ll also read “Twas the Night Before Christmas” and exchange inexpensive gifts, Susan Bratcher said.
In the West African nation of Burkina Faso, a church-planting team will host its annual “Fiesta Navidad,” described by team member Andy Johnson as “a huge Tex-Mex extravaganza.” The team invites neighbors and friends to the celebration.
“It occurred to our team … that Burkina Faso looks a lot like we figure parts of Mexico look during December,” Johnson said.
Maintaining holiday traditions — and starting new ones — can help families cope with being far from grandmas, grandpas, aunts, uncles and friends, missionaries told The Christian Chronicle.
E-mail and cards — and especially care packages — also help, Lisa Dunham said.
In Vienna, Austria, missionaries Brian and Alisha Rusher use text and video chat tools on their computer to stay in touch with family.
“Last year we really enjoyed being able to ‘see’ our families on Christmas, even though we were thousands of miles apart,” Alisha Rusher said.
“Sometimes I think about the hardships of earlier missionaries, who may have gone weeks or months without speaking to family … and I’m so grateful that I can see and speak to my family often,” she said.
Billie Ray, a church member in San Antonio, worked with women in Nigeria for up to nine months at a time for 15 years —  1960 to 1975.
Though the impoverished women seemed to know little of Christmas, “they showed me a lot of love, and so holidays were never a problem,” she said.
Tom Bonner, the lone American serving in Lushnja, Albania, said he doesn’t get the holiday blues, despite being apart from his four children and 12 grandchildren in the U.S.
Instead, he counts his blessings.
“I keep myself focused on why I am here — and who brought me here,” Bonner said.