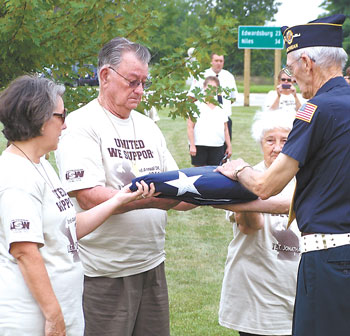 Family and friends of U.S. Army 1st Lt. Jonathan Edds gathered in his hometown of White Pigeon, Mich., recently to commemorate his life and service to his country.
Edds, 24, was killed in an insurgent attack in Iraq on Aug. 17, 2007. He attended the U.S. Military Academy in West Point, N.Y., and was an active member of the West Point Church of Christ. He met his wife, Laura, through an instructor who attended the West Point church. (See our report from 2007.)
Edds’ father, Barry, is minister for the White Pigeon Church of Christ.
In White Pigeon, about 160 people participated in the second annual 5K Walk and Run in support of the Edds Memorial Fund. Later, members of the community dedicated a 12-by-18-foot flag in Jonathan Edds’ memory. The flag will fly over Wahbememe Park, near the intersection of U.S. 12 and U.S. 131.
“He loved White Pigeon, he loved St. Joseph County and he loved his country, so I can’t think of a more appropriate tribute,” Barry Edds said during the dedication, according to the Sturgis Journal. “And if this memorial was for someone else and Jonathan was still here, he would have been very involved in it … that’s just the kind of person he was.”
Read the full story about this year’s event, and click here to read a story about the 5K event from 2010.
While he served in Iraq, Jonathan Edds was ministered to by Army Chaplain Jeff Bryan. The chaplain recently completed a book, “Memoirs from Babylon: A Combat Chaplain’s Life in Iraq’s Triangle of Death.” Barry Edds said that a section of the book focuses on the chaplain’s time with Jonathan Edds.
See the chaplain’s website for more details on the book. Also, see our feature on U.S. Air Force chaplain Lt. Col. Dennis Saucier, part of our special coverage of the 10th anniversary of 9/11.