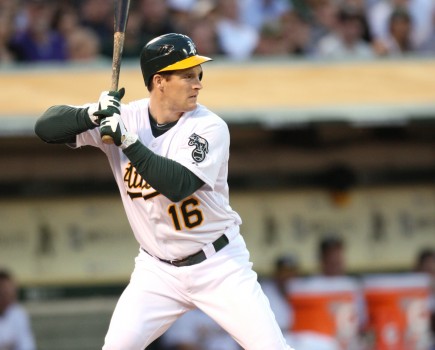 Bobby Ross Jr.
ARLINGTON, Texas — In a major-league clubhouse, pitchers and position players don’t always connect.
But when Washington Nationals slugger Josh Willingham was traded to Oakland this past winter, Athletics reliever Brad Ziegler knew the two had at least one thing in common.
Their faith.
The new teammates — both members of Churches of Christ — crossed paths for the first time at a media event in January.
“I met him there and tried to make a connection,” Ziegler, 31, a member of the East Grand Church of Christ in Springfield, Mo., told The Christian Chronicle before a recent game with the Texas Rangers.
In the visitors’ clubhouse, “Major League” — the 1989 comedy about a team of lovable losers who turn their season around — blared from a big-screen television.
Returning from taking swings in an indoor cage, Willingham, 32, talked over the din of Bob Uecker portraying fictional broadcaster Harry Doyle.
“Just getting to know Brad has been a blessing,” said Willingham, a member of the Cross Point Church of Christ in Florence, Ala. “Our relationship, I’m sure, will continue to grow.”
Last year, the Chronicle featured Ziegler and Willingham in side-by-side profiles. The “Boys of Summer” package highlighted major-leaguers known for living out their faith on the field and off.
At the time, Willingham and Ziegler did not know each other and had no idea they’d play together this season.
“We have a lot of good Christian guys in this locker room,” Ziegler said. “It’s a good clubhouse to be a part of, and Josh makes it better.”
A right-handed submariner, Ziegler burst onto the major-league scene in 2008 when he pitched a major-league record 39 consecutive scoreless innings to start his career.
His father, Greg, a preacher, and his mother, Lisa, have served the Odessa Church of Christ in Missouri for 26 years. Brad Ziegler has a 4-year-old daughter, Kaylin.
When he signs autographs — unless it’s a team ball and space is an issue — Brad Ziegler scribbles “1 John 5:5” by his name.
He’s hopeful that fans will look up that Scripture, which reads: “Who is it that overcomes the world? Only he who believes that Jesus is the Son of God.”
Willingham, Oakland’s left fielder and cleanup hitter, has smashed 20 or more home runs in a season three times.
The veteran power hitter played high school baseball at Mars Hills Bible School in Florence, where his mother, Denise, has taught elementary school for 26 years and his father, David, serves as vice president.
Josh Willingham and his wife, Ginger, have two young sons, Rhett and Ryder.
Willingham’s favorite Bible passage is James 1:2-4: “Consider it pure joy, my brothers, whenever you face trials of many kinds, because you know that the testing of your faith develops perseverance. Perseverance must finish its work so that you may be mature and complete, not lacking anything.”
That Scripture seems appropriate given the trials faced by Willingham’s home state.
The outfielder’s family and his hometown of Florence were spared major damage by the April 27 tornadoes that cut a deadly path of destruction across Alabama and the South.
However, Ginger Willingham and fellow Christians joined the relief effort in Hackleburg, Ala., where more than two dozen people died and the Church of Christ building was ravaged.
Teammates couldn’t help but notice Josh Willingham’s concern for his home state.
“I know he’s going through a lot right now with the tornadoes,” Ziegler said. “And so the whole team tried to come together and help do some stuff through his foundation and help out down there because he’s an integral part of this team already.”
Willingham’s nonprofit foundation raised roughly $50,000 from teammates and Major League Baseball to benefit victims.
“The response has been pretty overwhelming, and we’re going to be able to do a lot with that money and help a lot of people,” Willingham said.
Both Ziegler and Willingham have a fan in Texas Rangers star Josh Hamilton, an evangelical Christian known for overcoming his drug addiction through faith in Jesus.
Hamilton, the reigning American League Most Valuable Player, describes Ziegler as “just a solid dude.”
“Brad is one of those guys, when you talk to him and you walk up to him, from the first time you can tell there’s something different about him,” Hamilton said. “He’s a big encourager. He always encourages me when we’re able to spend time together and talk to each other about anything.”
As for Willingham, Hamilton described the 6-foot-2, 215-pound slugger this way: “Josh is a beast.” As with Ziegler, “When you meet (Willingham), there’s something different about him. … Josh is a big man, but he’s got a soft side to him and loves the Lord.”
Most Sundays during the season, Willingham and Ziegler join about 15 to 20 A’s teammates for a pregame chapel service.
During homestands, some A’s players conduct a regular Bible study. Willingham said he invites teammates to join the group.
“I’m not one that’s going to push anybody,” he said. “I just try to lead by example, for the most part.”