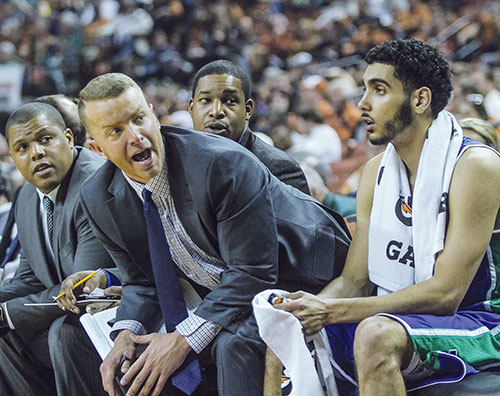 Faith on the court, at home and overseas

Texas basketball coach Will Chapman talks about his journey to Europe with a team of Christian athletes.
Katie Jones and Erik Tryggestad
Bible and basketball are Will Chapman’s passions. He studies both.

As a member of the coaching staff for Texas A&M University Corpus Christi, the 26-year-old works in multiple aspects of the game. He helps recruit players and breaks down videos to help them develop the skills they need on the court. He also helps them in the classroom, acting as a liaison with the university’s academic departments.

His faith in Christ and love of the sport drive him. He played two seasons of junior varsity basketball for Oklahoma Christian University in Oklahoma City and then spent two seasons as a program assistant before becoming a graduate assistant coach for head coach Dan Hays.

After earning a master’s in sports administration, he took an assistant coaching position at Southwestern Oklahoma State University for a year before moving to Corpus Christi in 2014.

Last summer Chapman joined the coaching staff for Athletes in Action, a faith-based program that takes players overseas to compete on the court and share their faith in Christ.

Chapman, who grew up in the MacArthur Park Church of Christ in San Antonio, received the invitation to coach for Athletes in Action again in 2016, with possible travel destinations in Europe or Australia.

“It will just depend on if I can get away again,” he said. “Division 1 athletics are still crazy busy in the summer with camps and workouts – but I would love to go again for sure.”
Growing up, did you have any favorite players or coaches who inspired you to pursue a life in basketball?

As a young boy, I always wanted to be a coach. Growing up, playing my whole life, all the way through my second year at Oklahoma Christian, I enjoyed learning the game and watching more than I did playing.

That’s when I really knew I should get into the profession. Some coaches that inspired me were Gregg Popovich of the San Antonio Spurs, my grandpa who was a coach, and coach Dan Hays at Oklahoma Christian. Coach Hays really helped me get into the college game and gave me a chance to get my feet wet and pursue what I wanted.
What is Athletes in Action?

It’s an organization. They do various things, but the main thing is called Foreign Tours. A director and a disciple — guys who lead Christ-like activities — find Division 1 college coaches and find D1 players throughout the country at various universities. They form a team and travel to Europe.

We compete and do Christ-like activities. We call it “team time.” We’re traveling, playing games every day, and we’re practicing. And we’re also having a kind of study group for a couple of hours every day where we reflect on the day and our relationship with Christ. We read the Bible and talk about Christ-related stories.

The organization is all throughout the United States. It’s Christian people doing godly things. It’s a very powerful and faithful organization. I was very impressed by it.
In which countries did you play, and for how long?

We were there for a little over two weeks.
What was the overall experience like for you?

It’s a life-changing experience — to see how life is different in other parts of the world, to see something different and to do it with people who are seeking and believing in the same thing as you.

My faith and my background with Christ — obviously, that was the reason I was coaching. Every decision I make comes from my relationship with the Lord. That affected how I conducted myself over there and my general outlook on the trip.
Do you feel that your faith was strengthened by your experience with Athletes in Action?

My faith really expanded on this trip because of the time spent with the players and the other coaches. We became very close and tight during the tour. We were around each other all day, every day for half of a month.

Learning different people’s faith stories and perspectives on Christ helped me become a stronger Christian and allowed me to be more open with my faith and spiritual life.

Coaching is one of the professions where you can impact so many young men’s lives while you coach them — whether that’s a long or short time — and this was another opportunity for me.

There’s a famous quote attributed to Billy Graham: “One coach will impact more young people in one year than the average person does in a lifetime.” I really take that quote to heart and believe and live by that.
As a Christian, is it difficult to coach at a secular school?

No, it’s not, because it gives me an opportunity to reach out — seek out — people who know about Christ, but they don’t have a real strong background as far as faith. As one of the basketball coaches, I use that to my advantage.

It’s a big school, so I look at it as a positive thing — from an opportunity standpoint — to spread the Word and help people with their relationship with Christ.