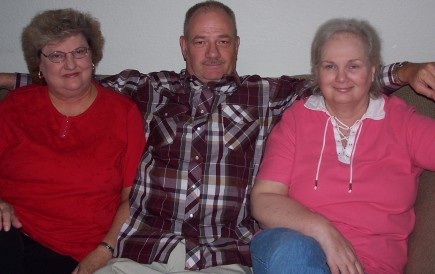 INSIDE STORY: Faith, family, fond memories — and a funeral

Bobby Ross Jr.
HAYTI, Mo. — So many of my best childhood memories reside in and around this little town in southeastern Missouri’s Bootheel.
When I was a little boy, my Grandma and Paw-Paw Nanney — my mother’s parents — lived in a mobile home beside Interstate 55, just a few miles outside Hayti (pronounced Hay-Tie).
My Aunt Joan — Mom’s sister — and her family built a house on the same rural patch of land. My brother Scott, sister Christy and I spent countless hours here with our favorite cousins Kim and Angie.
As tractor-trailer rigs roared by on the interstate, we children played “colored eggs,” a game we invented that involved chasing each other around the yard. And we enjoyed many wonderful, sun-drenched afternoons diving into my relatives’ pool.
It took me a while to learn to swim, and my family still laughs about the time I fainted in the deep end. A breathless Kim pulled me out of the water and performed a very elementary version of cardiopulmonary resuscitation.
“Bobby’s dead! Bobby’s dead!” my sister screamed.
Angie, a few years older than the rest of us, came running from inside the house and was pleased to see me regain consciousness.
As much time as we spent together during the week, though, my cousins and I parted ways on Sundays. They attended the First Baptist Church. We belonged to the Church of Christ, which we were raised to believe was “the one true church.”
One time, Kim and Angie talked Scott and me into going to Vacation Bible School at the Baptist church. The cookies and red Kool-Aid were familiar. The piano was not. I felt so guilty afterward.
All these memories came flooding back recently when Aunt Joan died at age 63.
Joan Carol Hill had battled cancer and other health problems in recent years. After the death of her second husband, Jerry Hill, a few months earlier, she had been moved into a nursing home. Still, her death came as a shock.
Aunt Joan was opinionated, bossy, spunky and smart — all traits that endeared her to me. She loved to spar good-naturedly with her nephew Bobby. And vice versa.
She also enjoyed writing and told me that I got my writing talent from her. I took that as a compliment. But Aunt Joan wasn’t always a fan of what I wrote in this space.
Southern Baptist born and bred, she took exception a few years ago when I wrote about the strong faith of my Papa and Grandma Ross and told about Mom’s conversion to the Church of Christ after meeting Dad.
Aunt Joan felt that I had slighted Grandma Nanney, who died in 1999. That certainly was not my intention.
My Baptist grandmother believed in Jesus and read her large-letter Bible daily.
She spent a few summers with my family when we lived in Tennessee and lived with us in Texas for a while when I was a teen-ager. She liked to hear Dad preach and frequently worshiped with us at the Church of Christ. She often sat beside me and delighted in telling people that both of us enjoyed singing but neither of us could carry a tune.
Baptist pastor Miles Ziegler preached Grandma Nanney’s funeral — and Aunt Joan’s too. At Aunt Joan’s service, Ziegler talked about her baptism. He described it as an expression of faith, not an act of obedience essential for salvation.
As Baptist Standard editor Ken Camp wrote in a recent article, “Historically, Baptists have rejected both the sacramental belief that the act of baptism itself imparts grace and the opposite extreme that considers it a trivial ritual with little real spiritual meaning.”
Of course, most in Churches of Christ — myself included — consider baptism a necessary part of accepting Jesus. We believe in immersion for the forgiveness of sins.
Ziegler assured mourners that we will see Aunt Joan again in heaven. I certainly pray that he’s right. I am comforted to know that we serve a loving, all-knowing God and that judgment rests with him.
Even before Aunt Joan’s death, the extended Ross family planned to visit Hayti during our annual summer vacation.
We intended to spend time with Kim, Angie, Angie’s daughter Kristy and Kristy’s beautiful newborn Ella Marie — Aunt Joan’s first great-grandbaby and the joy of her final weeks.
Aunt Joan, adjusting to the nursing home in Peoria, Ill., where Angie lives, was expected to be in too poor health to make the trip. But she showed us — she did return to Hayti. Only not as we’d expected!
My precious Aunt Joan was one of a kind, and I will miss her.
May she rest in peace.