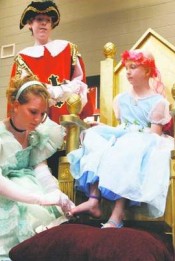 Dedra L. McDowell
MURFREESBORO, Tenn. — Church youth group answers wish of child suffering from leukemia
Fairy tales can come true. Just ask Sadie Gentry of Lewisburg, Tenn.
The 11-year-old, who has been undergoing treatment for leukemia, always wanted to meet the Disney princesses at Walt Disney World, and her friends from the North Boulevard Church youth group in the faraway land of Murfreesboro helped make that wish come true.
Sunday, the youth group made Sadie the star of her own fairy tale as she was led around “The Kingdom of ‘Boro” by a narrator, a knight, two fairy godmothers and Cinderella.
Sadie was treated to a series ofevents fit for a princess, complete with a horse-drawn carriage, amanicure, glass slippers and a ball.
“I didn’t know it would be this detailed,” Sadie’s mother, Angel, said. The teens, in full costume, led the family on a three-hour tour throughout the city as Sadie met several Disney princesses and gathered clues about her surprise trip.
The day ended with a ball held at the church. It was there, surrounded by family and friends, that she found out she would be leaving for Disney World in April.
“It’s just been overwhelming,” Sadie’s father, Shannon Gentry, said. “They did a great job.”
The youth group adopted Sadie’s wish and began a campaign to raise money to send Sadie, her parents and her sisters, Catie and Ivy, to Disney World. They began raising money in October and had surpassed their goal of $6,000 by Super Bowl Sunday in February.
Members of the church said the teens held bake sales and dodge ball tournaments and even donated their own money to the cause.
“It’s amazing that they were willing to do this, not ever meeting her and not ever knowing her,” Nancy Bagwell, a member of the church, said.
“This is our third year in a row to partner with Make-A-Wish of Middle Tennessee,” said North Boulevard youth minister David Skidmore. The Make-A-Wish Foundation of Middle Tennessee grants wishes to children with life-threatening illnesses with the help of individuals and organizations such as the church’s youth group.
“Three years ago, our teens asked for a challenge that was bigger than themselves. They were seeking a way to demonstrate extraordinary love to someone in our community. We felt that Make-A-Wish was an organization that would help us do this.”
Skidmore said that over the three years and the three wishes, more than 350 teens have participated.
“Their servant hearts and the lessons they have learned through this effort have grown beyond the three children whose wishes we have granted, and their compassion now extends to the broken souls in their schools, our community, and in other parts of the world,” he said.
“In granting wishes, I have seen our teens transformed into a generation who can bring great change to a hurting world,” Skidmore said.
“Granting a wish is more than just providing a child with a vacation or special event,” Make-A-Wish Executive Director Michelle Rosen said.
“A wish provides a child and family with an experience that restores hope to their lives and provides a joyful moment, or an occasion to look forward to during lengthy or life-long treatments for and recovery from illness. We are so grateful to the incredible teens at North Boulevard Church of Christ not only for raising the funds to adopt Sadie’s wish, but for their extraordinary efforts to give Sadie a special day she will never forget.”