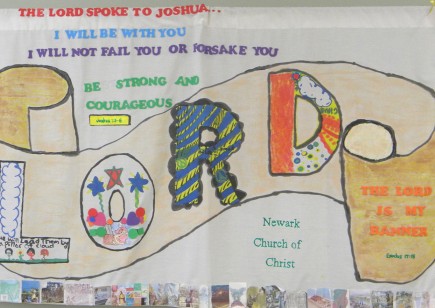 Bobby Ross Jr.
Editor-in-Chief
NEWARK, Del. — Thirty-six years ago, Newark Church of Christ leaders founded Aletheia Christian School and Child Care as a community outreach.
The dream: to educate children and nurture faith in Jesus Christ.
“It enabled us to serve the community, and through that service, it brought people to Christ,” said Richard Duzan, the school’s principal and one of five Newark church elders. “We touched the lives of thousands of kids and their families.”
But in June, the school will close — the victim of rising costs and declining enrollment.
In Charlotte, N.C., the same fate awaits the 24-year-old Providence Christian School — a ministry of the Providence Road Church of Christ — at the school year’s end.
“It hurts us deeply to have to take this action,” said Lee Thrasher, the Providence Road church’s executive minister.
Schools associated with Churches of Christ are feeling the pain of tough economic times. That’s particularly true, leaders say, for schools outside the fellowship’s traditional geographic strongholds.
The latest closures follow at least five Christian schools that did not reopen this past fall — one in Michigan, one in Florida and three in Ohio.
Overall enrollment at the 100-plus schools nationwide associated with Churches of Christ fell 6.7 percent this school year, according to the National Christian School Association. The total dropped to 33,733, down from 36,139 last school year.
“It’s an eye opener,” said Philip Patterson, president of the Oklahoma City-based association.
Hughson Christian School in California’s Central Valley is among those struggling to survive.
“We ran out of money in December and could not pay a teacher … until after the first of the year,” said Don Bigelow, principal of the 36-student school, started in 1978 at the Hughson Church of Christ.
After prayers and pleas, donations poured in, he said. “We are going to make it this year. It is still going to be tight.”
At the Christian Academy of St. Louis, enrollment has dropped to 140 in kindergarten through 12th grade, down from 200 a few years ago, administrator Carla Payne said. The school opened in 1976.
“Sometimes, families are forced to choose between everyday survival and a Christian education for their child,” Payne said.
At Anderson Christian School in Anderson, Ind., enrollment hit 300 less than a decade ago. It has fallen to around 200 as the central Indiana community deals with the loss of 20,000 General Motors manufacturing jobs, school administrator Tom Snell said.
Yet the school, housed at the Lindberg Road Church of Christ for 34 years, added the ninth grade this past fall and plans to expand to remaining grades in future years. “Anderson Christian School is holding its own and even making small gains,” Snell said.
But he added, “Our existence as a school is somewhat fragile since we have no endowment to tide us over if there were a sudden downturn that caused us to lose significant numbers of students.”

N.C. SCHOOL LED TO CONVERSIONS
At Providence Christian School, enrollment in prekindergarten through eighth grade dropped to 173 this school year, down from 250. Only half of current K-8 families committed to return next year, and the church faced a potential three-year deficit of $1 million to keep the school afloat, Thrasher said.
“Less than 10 percent of our (students’) families attend area Churches of Christ,” Thrasher said. “We have seen numerous families over the years become Christians as a direct result of this outreach ministry of our church.”
Providence’s school head, Jack Exum, has accepted a new position leading Hickory Valley Christian School in Chattanooga, Tenn., which he said is in a stronger financial position.
“We must help parents see the value of a Christian education that is distinctly Christian and is safe and academically strong,” Exum said.

THE FINAL STRAW IN DELAWARE
In Newark, roughly halfway between Baltimore and Philadelphia, enrollment reached 225 in Aletheia Christian’s heyday.
But a combination of factors conspired against the school, from the growth of homeschooling to the nearby opening of a large Catholic school and a free public charter school.
This year, Aletheia’s enrollment fell to 80, forcing the consolidation of grades and creating a six-figure deficit for the church.
“With the economy a big factor … on top of all those other things, that was just kind of the final straw,” Duzan said.
As the school year wraps up, the 250-member congregation is giving extra to help erase the debt and thanking God for the blessings Aletheia Christian has brought, minister Steve Mahoney said.
Church leaders are determining future uses for the building and focusing on other ministries, such as the congregation’s Blue Hens for Christ outreach at the University of Delaware, Mahoney said.
For Duzan, a Texas native who came to Newark in 1967, the closing is bittersweet. The Abilene Christian University graduate was part of a much-heralded effort by Churches of Christ in the 1960s to evangelize cities in the Northeast. The Exodus Movement involved Christians in the South and Southwest moving to places such as Newark.
Duzan accepted his elementary education degree one day and married his bride, Andrea, the next. For their honeymoon, they pulled a U-Haul trailer 1,600 miles to Delaware. He taught public school for a few years before Aletheia Christian became his life’s work.
Most of his five children and 15 grandchildren live within an hour of Newark, so he has no intention of moving.
“Everybody knows that there is no choice,” he said of the school’s closing. “I look back and feel like the Lord led me here. … And I feel like we’ve had the opportunity to teach the Bible and affect a lot of lives for Christ.”
At age 23, Janice Douglass left her home congregation — the Biddeford Church of Christ in Maine — and came to teach at Aletheia Christian in 1982.
Twenty-eight years later, she’s still here.
“I do believe that when God closes one door, he’ll open another one for me,” she said. “So I’m hoping there’s a job out there where I can still teach Bible to students and incorporate that into my classroom.”