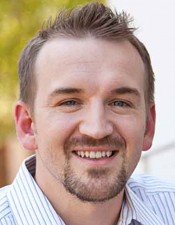 JONATHAN STORMENT
This past summer, I was on the study break that the Highland Church of Christ gives me. I knew I was going to do a sermon series on minor characters in the Bible, using the metaphor of “extras.” So I decided to go to Hollywood and try and be an extra in a movie.
You know, normal preacher stuff.
After many attempts, I got into a scene from what I thought was a new “Annie” movie with Christian Bale. I was accepted to play a working class restaurant patron.
When I got to the Disney studios, I discovered that the  film wasn’t a new “Annie,” featuring Christian Bale as Daddy Warbucks. It was, instead, a TV show called “Good Christian Belles” that had been booked by a friend as a favor to a woman named Annie.
It’s cool though. I can roll with the punches.
I was sent to the basement, where they were holding the extras. I learned that the best way to start conversations with them is to ask about what work they were the most proud of, what sets they enjoyed working on the most and to tell them that it was my first time ever to do this. People seemed to take me under their wing and tell me their stories.
The problem came when they wanted to hear mine. I guess most preachers don’t do this in their off time — especially considering the show we were working on.
The assistant director informed us that “Good Christian Belles” — even before a single episode had been shot — had been banned by the American Family Values Association. The show’s name has since been changed to “GCB” and the previews insinuate that the “B” stands for something much worse than “Belles.” (Remember, I thought this was “Annie.”)
As more and more details came out, I learned that the scene we were shooting wasn’t in a restaurant but in a bar, one modeled after a restaurant that is famous for demeaning women and serving good chicken wings — or so I’ve been told.
So I start wondering about whether this whole “method preaching” approach is worth it, and wishing the musical orphans I had planned on would show up. Then a couple of my new friends reminded me that this is background work. You are there as furniture. You are a blur; you won’t be getting a line, and you aren’t going to be in any scene directly. You are just there for ambiance.
Then the assistant director told us that they needed five working-class guys to sit at the table that actress Leslie Bibb (from “Taledega Nights,” “Zookeeper,” “Law Abiding Citizen”) was going to serve.
I sank down in my seat and hoped that five other guys would volunteer. But Derrick, a guy I had just met, spoke up.
“Here’s your fifth guy,” he said, pointing to me. “He’s working class.”
Next thing I know, I’m on a set that’s all smoke and mirrors. Inside, it felt like an authentic Texas-style restaurant. If it weren’t for the hundreds of thousands of dollars worth of cameras and the people walking around yelling directions, you might have actually thought that those appetizers in front of you were edible.
We got our instructions. Leslie Bibb would walk over to our table, and about halfway through the scene we would start chanting “Amanda, Amanda!” One of us would pay her money for our food and beverages.
Then it got even more complicated. The producers thought I would be perfect to hand Amanda the money and say a line, “Thanks and here you go.” She would say, “Wow! Thank you!” Then the scene would go on, and Leslie would have the main conversation somewhere across the restaurant.
After a few hours on the set, I had come to grips with the reality of what was going on. I was sitting in the holding area, daydreaming about worst-case scenarios.
That’s when another extra, Allison, spoke up. She had heard that I was a preacher and was intrigued by the fact that I was doing this — particularly this show. Allison had been married before, to a Jewish man. She was vilified by the Christian people whom she had grown up with. They saw her marriage as a mixed marriage, and instead of engaging her, they kept her at arm’s length.
Allison made the point that the show we were filming hit pretty close to home for her. She had been wounded by church — and church people. When she thought about Christians, she thought about the American Families Values Association, the very association that had boycotted the show we were working on.
Then she said, “I don’t know a lot about organized religion anymore, but I just want you to know I think it’s cool that you are here doing this.”
And after that, I did too.
I think Christians should be involved in the entertainment industry — even when we’re not in control of the storyline. Hollywood needs sincere Jesus-followers, ones who aren’t judgmental and pretentious. It needs people who understand that holiness isn’t withdrawing from the world, but being different from it.
There’s not enough holiness in the world, but the Light has shined in the darkness — and the darkness will not overcome it. That’s what Jesus’ followers believe, and the world could use us trying to live that out.
When the show premiers March 4 on ABC, it will be controversial. It satirically portrays some Christians as people who are not genuine. But this show will unknowingly begin its opening scene with a preacher from a church in West Texas, sitting at a pretend bar, eating pretend chicken wings and having subversive conversations that, hopefully, gave Jesus a better name.
JONATHAN STORMENT preaches for the Highland Church of Christ in Abilene, Texas. He blogs at www.stormented.com. Follow him on Twitter at @Stormented.