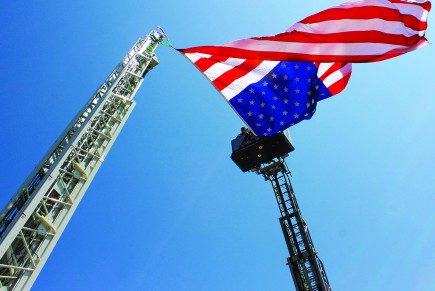 After a deadly blast at a fertilizer plant owned by a church elder, West Church of Christ members rely on faith, prayer and fellow Christians.

Bobby Ross Jr.
Editor-in-Chief
WEST, Texas — The auditorium lights flickered.
The glass doors flew open.
West Church of Christ minister Ernie Albrecht was sharing Wednesday night devotional thoughts — focused on Ezekiel and the need for Christians to stand up and be strong in their faith — when a loud boom rocked the pews. 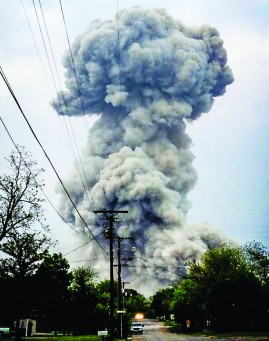 Smoke rises after the explosion at the West Fertilizer Co. plant. (PHOTO BY BRIAN FICKE)“For a moment, I thought, ‘Man, Jesus is coming!’” Albrecht said later. “It was a scary moment because it was like, ‘This may be it.’”
Albrecht finished his remarks, and deacon Shorty Harkins — who brushed off the noise as thunder — stood to lead the invitation song, “There Is Power in the Blood.”
Harkins had asked elder Donald Adair, an 83-year-old farmer and owner of the West Fertilizer Co., to say the closing prayer.
But in the dark auditorium, Harkins did not realize Adair had received a phone call a few minutes earlier and quickly left. Unknown to the congregation, Adair had learned that the fertilizer plant had caught fire.
“Oh, no!” a few members had heard Adair’s wife, Wanda, mutter on the way out.
Outside the church building, a giant plume of smoke filled the still-bright sky — the result of a massive explosion at Adair’s fertilizer plant that killed 15 people and wounded more than 200.
“It kind of looked like a mushroom cloud,” said Harkins, a longtime resident of this north-central Texas town of 2,800, known for its Czech culture and kolache pastry shops. “It was about a mile and a half over there to it.”

A law enforcement officer had stopped the Adairs on their way to check on the fire, so they escaped without injury when the plant exploded about 7:50 p.m. April 17. Volunteer firefighters, first responders and at least one plant employee were among the dead. 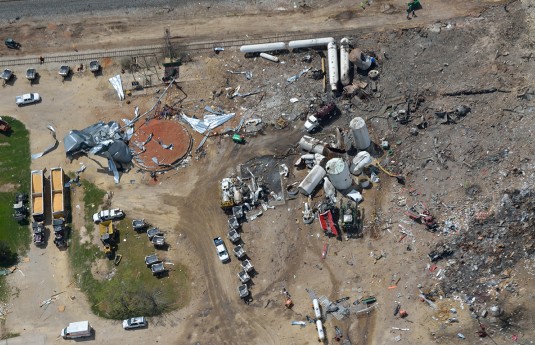 When Adair bought the floundering fertilizer company in 2004, his neighbors were grateful he had saved them from driving extra miles to Waco or Hillsboro to buy fertilizer, feed and tools, Reuters reported.
Adair issued a statement saying he is “broken with grief for the tragic losses to so many families in our community.”
“My family and I can’t express enough our deep appreciation for the loving service and selfless sacrifice from within and around our community responding to the urgent needs of those affected,” the elder added. “I am proud to be associated with West Church of Christ, which has opened its doors to the State of Texas to provide grief counseling services. My family and I will continue to assist in relief efforts through our church family.” 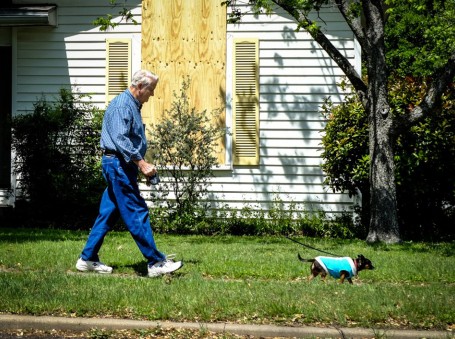 A man walks his dog past a damaged house in the aftermath of the West Fertilizer Co. explosion. West is in north-central Texas, about 70 miles south of Dallas-Fort Worth. (PHOTO BY OLAF GROWALD)
Already, the explosion has spawned at least six lawsuits, including one from the family of a volunteer firefighter killed.
In his statement, Adair pledged “to do everything we can to understand what happened to ensure nothing like this ever happens again in any community.”
Albrecht described Adair, who he said has heart problems, as “the kind of guy who’d do anything for anybody.”
“He’s old enough that he talks about how he picked cotton with Willie Nelson,” the minister said, “and about how when he was young, he was out there with his mom, pulling up his diaper and picking cotton.
“But he does so much for the community,” Albrecht added. “It’s just sad because he never, ever could have imagined this to happen. … He’s all broken up. I just hope he makes it alive out of this situation.”
BLOOD ON THE STREETS

Fearing casualties, about 20 members and visitors formed a circle in the church parking lot and prayed that Wednesday night.
Afterward, Albrecht and his three daughters — Bianca, 12; Eliana, 10; and Gabriela, 7 — loaded into the family van to head home.
The preacher’s wife, Amanda, and son, Malachi, 9, got into the family’s other car to take an older member home.
As the minister drove toward the church parsonage — two miles from the building — the disaster scene unfolded. 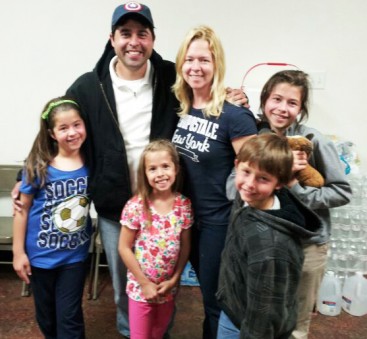 Ernie and Amanda Albrecht, with Eliana, 10; Gabriela, 7; Malachi, 9; and Bianca, 12. (PHOTO PROVIDED BY ERNIE ALBRECHT)“We started seeing many garages that were sucked in like a tin can, and we saw windows just blown out,” Albrecht said. “There was so much pressure that built up, the glass didn’t just blow — the frames of the windows blew.
“There were people bleeding all up and down the streets,” he added. “Just crazy stuff.”
His daughters burst into tears —  worried about Albrecht’s brother, Josh, who lives with the family, and about their pets, including a parrot named Kiwi and a German shepherd named Portia.
The parsonage’s ceiling and back brick wall collapsed.
However, the minister’s brother escaped with a small bump on his head.
“He had a little piece of glass in his arm,” Albrecht said. “But other than that, he was fine.”
The pets were nowhere to be found.
“There were people bleeding all up and down the streets. Just crazy stuff.” Ernie Albrecht, West Church of Christ minister
‘NEIGHBORS HELPING NEIGHBORS’

To make ends meet and provide health insurance for his family, Albrecht worked five nights a week as a nurse at West Rest Haven.
The explosion flattened the 133-resident nursing home.
In the chaotic scene that night, Albrecht ran into fellow nurse Sunze Rae Lewis at the end of his street.
“She was bleeding from top to bottom,” he said. “She had glass in her eyeball. … She got blown out the window at the nursing home. … It was just so eerie and freaky.”
The minister ushered his distraught colleague into his van.

A U.S. flag hangs between two fire truck ladders in West, Texas, as firefighters pay tribute to comrades who lost their lives in the April 17 explosion at the West Fertilizer Co. plant. (PHOTO BY BOBBY ROSS JR.)

He did not leave the emergency room until about 2 a.m. the next morning.
West elder Tom Kissinger and his wife, Peggy, welcomed the preacher’s family into their home.
Many displaced victims gathered at the West Church of Christ, recounting what they had seen and voicing concerns about the fate of friends, relatives and neighbors.
West church members Len and Peggy Martin took in an elderly couple who lost their home, said their son Dan Martin, a deacon of the 8th and Harrison Church of Christ in Harlingen, Texas.
“That’s just one of many, many examples of neighbors helping neighbors,” Dan Martin said.
BLESSINGS AMID TRAGEDY

In the days that followed, Albrecht’s cell and church phones rang constantly.
From Churches of Christ near and far, offers to send money, supplies and disaster relief volunteers piled in.
“You realize there’s faithful brethren that just want to do good,” Albrecht said. “The brotherhood, for all the negative talk, is an amazing brotherhood.”

Christians from near and far donated goods under a tent outside the West Church of Christ. Area congregations and national ministries are helping meet people’s needs. (PHOTO BY BOBBY ROSS JR.)

Nashville, Tenn.-based Churches of Christ Disaster Relief Effort dispatched a tractor-trailer rig full of emergency food boxes. Disaster Assistance CoC, sponsored by the Lake Jackson Church of Christ in Texas, set up its mobile feeding headquarters.
Christians from West and nearby communities erected tents to serve victims. In the afternoon sun, Jackie Swift sorted boxes of shampoo, toothpaste and deodorant.
“I decided to come over here and see what I could do,” said Swift, a member of the Robinson Church of Christ, about 25 miles south of West.
The New Road Church of Christ in Waco — along with a number of other area congregations — helped coordinate relief efforts.
In less than two weeks after the explosion, New Road leaders delivered $125,000 in checks and gift cards to the West church. 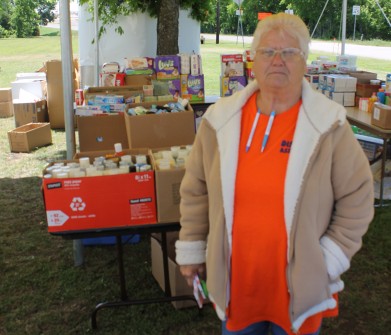 West Church of Christ member Anna Roberts helps with the disaster relief effort. (PHOTO BY BOBBY ROSS JR.)“As donations come in, we’re trying to get them out as fast as we can to help people,” Albrecht said. “It doesn’t matter who they are, we want to show that the church cares.”
As for Albrecht, he joked that he and his wife are like newlyweds again — starting all over after 15 years.
His children lost impossible-to-replace keepsakes like his 12-year-old daughter’s stuffed animal horse Commonwealth, he said.
But on the bright side, the family found its pet bird, dogs and even its bearded dragon at the local humane society three days after the blast.
Rather than focus on what his family has lost, the minister chooses to thank God for the opportunity gained.
“In our ministries, all of us say, ‘God, give me the opportunity to touch people’s lives,’” Albrecht said. “We never see it like this. But yet, it’s at our feet right now to do something amazing and good.”