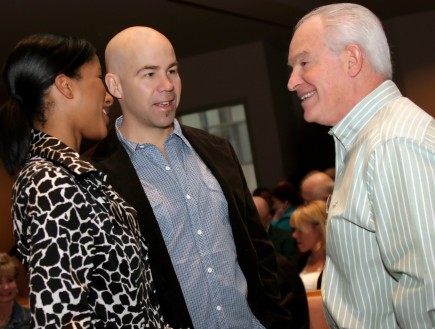 At a Georgia church, a donor’s $1.5 million gift is shared by the congregation and spent in the Lord’s name.

Bobby Ross Jr.
Editor-in-Chief
Let God write the story.
Pulpit minister Don McLaughlin made that request of the 1,400-member North Atlanta Church of Christ last fall as he revealed astonishing news.
A donor who asked to remain anonymous had given $1.5 million to be divided among all present that Sunday — from first-graders up — and spent on good works in the Lord’s name.
“The most amazing thing to me was that if you were at the service that day, even if you were a visitor, you could get a voucher because the elders felt like God had placed that person there for a reason,” said longtime member Cari Thornton, who has taught children’s Sunday school classes for more than 30 years.
But please, McLaughlin asked, no Facebook posts, no Twitter messages, no mass e-mails about the news.
“We recognized that God was the one guiding every step of the process up to that point, and the story was just getting better and better,” McLaughlin told The Christian Chronicle. “It seemed to us that at such a critical moment in the development of the story, we should wait on the Lord to show us what he would do.”
But now the story — God’s story — can be told.
“The reason we are willing to share it now is because we are able to tell some of the wonderful things God is doing,” the minister said.
Brent Adams, 28, paralyzed and nearly killed in a dirt bike accident two years ago, got to know church members David and Mendie Hogan while undergoing rehabilitation in Atlanta.
When David Hogan called to see if Adams needed help with bills, Adams thanked him but said he had them covered.
The next day, a $4,000 medical bill arrived in the mail. Adams called Hogan back.
“I am forever in their debt and so grateful,” said Adams, a member of the West Orange Church of Christ in Winter Garden, Fla. “The story behind how everything worked out is just amazing. It is definitely no coincidence, and I know God was behind everything.”
THE FIRST CHAPTER
Let God write the story.
In 2008, McLaughlin delivered the Thursday night keynote at Lipscomb University’s Summer Celebration lecture series in Nashville, Tenn.
After sitting down, McLaughlin was surprised when the big screen flashed his name as the speaker, too, at a teen gathering later that night.
Unprepared and unsure what to say, McLaughlin orchestrated an impromptu discussion on tackling world problems.
Four girls from an El Cajon, Calif., church described the poverty they witnessed on a mission trip to the City of Children in Ensenada, Mexico.
Touched by the girls’ experience, fellow teens agreed that they wanted to help the orphanage.
“Well, then, get in your purses and your pockets and put your money on the table,” McLaughlin told them.
The total given: about $40.
While that might not sound like much, McLaughlin stressed how far it could go in a Third World country.
Later, students returned to their rooms and brought back more money. By night’s end, the total topped $100.
But the teens didn’t stop there. The students made an appeal at the next morning’s large-group gathering for adults to join the cause. By the event’s conclusion, the change and dollar bills added up to $4,000.
Excited, McLaughlin shared the story at North Atlanta.
The following Sunday, members placed cash on the communion table after the regular offering and sermon.
The collection raised funds for orphanages in Kazakhstan, Mexico, Nigeria and Ukraine.
The total given: $46,000.

INSIDE THE ENVELOPE
Let God write the story.
After the special contribution, a brother in Christ called McLaughlin and told him he was moved by what God was doing.
“I want to help with this,” said the man, who explained his desire to put money in members’ hands and let them find needs. “I want to give $1 million.”
“Let’s pray about it,” McLaughlin said.
While the idea excited the minister, the North Atlanta church has a thriving recovery ministry and counts hundreds of former addicts among its members. Handing large amounts of cash to recovering addicts was not an option.
“The bottom line is, we were not going to get up and say, ‘Everybody that doesn’t have a history of addiction gets to do this project,’” McLaughlin said. “That’s just not going to fly with the DNA of our love for each other.”
Leaders came up with a plan whereby members — including those in recovery — would receive vouchers that they could use to help people with rent, medicine, groceries and other needs. Members would decide how to spend the voucher, and the church would take care of the actual financial transaction.
But in September 2008, the stock market crashed. And the benefactor asked to meet with McLaughlin. “I’m not going to be able to do it,” he told the minister.
End of story. Except that this was God’s story. Last summer, the man called McLaughlin again. He explained that he had just met with his corporate board and repented for his lack of faith.
“Did you use the word ‘repent’ in a corporate board meeting?” McLaughlin asked.
“My mom taught me to live by faith and not by fear. Last fall, I lived by fear. I am repenting,” the man said. “I want you to come over and pick up this check.”
McLaughlin gave the envelope to a church accountant without opening it. “Did you look at this?” the accountant asked minutes later. “It’s for $1.5 million.”

‘A MIRACLE FROM GOD’
Let God write the story.
It’s a story of third-graders feeding the homeless and fourth-graders providing school supplies for girls in Afghanistan.
It’s a story of teenagers supporting mission work in Honduras and adults covering rent for out-of-work, soon-to-be-evicted apartment dwellers.
Before disclosing the donation, church leaders engaged members in a 40-day Bible study called “Open Eyes, Open Hearts, Open Hands.” Leaders dubbed the experience a “journey toward a life of compassion.”
McLaughlin taught on the parable of the Good Samaritan and urged members to see themselves not as the Samaritan, but as the innkeeper entrusted with someone else’s money to help a person in need.
Adults were given $1,250 vouchers. High school students received $500, middle school students $100 and elementary school students $50.
After praying, Bethany Bagwell, wife of youth minister Justin Bagwell, asked to receive her funds in the form of gift cards.
On a Friday, she enlisted the help of youth group members Shelby McVey and Mary Mayfield and went in search of strangers in need.
At a pharmacy, they met a woman named Debra who was waiting for prescriptions. The prescriptions were $270 and not covered by insurance. Bagwell and the teens stepped in to pay.
“Both Debra and the pharmacist just stood there with their mouths open,” Bagwell said. “We just told her that we were wanting to help someone and show God’s love.”
Thornton, a paraprofessional in a preschool special-needs class, paid a colleague’s $300 medical bill, bought a $250 supermarket gift card for a relative and donated $400 to Rainbow Omega, an Alabama ministry that serves adults with developmental disabilities.
She also helped a part-time custodian at her school. The custodian, named Carolyn, works two jobs during the day and cleans a hospital operating room at night.
Thornton knew that Carolyn often drove her small car close to empty, and sometimes slept in it to avoid using gasoline to go home to sleep between jobs.
Tears came to Carolyn’s eyes when Thornton explained that she wanted to buy gas for her.
“She said, ‘I can’t believe this is happening. I didn’t know if I was going to get to work this morning. I didn’t know if I had enough gas to make it across town,’” Thornton said.
Besides buying a $250 gas card for Carolyn, Thornton also took her grocery shopping — and paid for it out of her own pocket. The total bill: $260.
“Is there anything else that you would like to eat or have around the house?” Thornton recalls asking after an hour and a half of shopping.
“No,” Carolyn replied. “This is more groceries than I’ve ever had in my cart in all my 58 years. It’s like a miracle from God.”