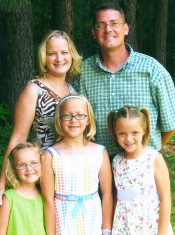 INSIDE STORY: Even after shooting, Tennessee family counts its blessings

Bobby Ross Jr.
What kind of guy is Grant Edmonds?
“He’s the kind of guy,” Jeff Phillips told me, “who’ll show up and cut your yard, and you’ll not know who it was, and he’ll never tell you.
“He’s the kind of guy,” added Phillips, youth and involvement minister for the Covington Church of Christ, north of Memphis, Tenn., “who, if he saw somebody in need, would help them.”
In a word, he’s a “servant,” said his close friend and brother in Christ.
What kind of guy is Grant Edmonds? He’s the kind who, when a robber shoots him in the belly, covers the wound with his hand and drives himself to the hospital, according to friends, family and a Memphis police report.
Edmonds, the Covington church’s youth ministry deacon, works the second shift at a truck distribution center in Memphis. About 11 p.m. on a recent Tuesday, he exited a highway on his drive home. A car in front of his truck stopped. Another car blocked him from behind.
“A person ran up from the rear car, pointed a gun at him, got into the truck and made him drive off the main road,” his sister Laura Craft said. “He took $60, rifled through the glove box and shot Grant in the stomach.”
No arrests have been made, Memphis police Sgt. Karen Rudolph said.
Despite the late hour, Phillips was on his way to help a friend hang a door when the minister’s wife, Jennifer, called and told him something had happened to Grant. Jeff and Jennifer Phillips rushed to the Edmonds family’s home. Jennifer stayed with Grant’s daughters — Lydia, 12; Abby, 10; and Melea, 8 — while Jeff drove the victim’s wife, Crystal, to the hospital.
The bullet perforated Grant’s colon and small intestine. Five hours of surgery ensued, followed by a second surgery.
Meanwhile, the waiting room filled up — as countless people touched by a humble Christian servant came to offer prayers and support.
“Dozens of members of the Covington church spent all day Wednesday at The Med,” said Susan Edmonds, wife of Grant’s brother Jim and a member of the Estes Church of Christ in Henderson, Tenn.
Earlier, during the Covington church’s Wednesday night summer series, Tom Childers from the New Hope Church of Christ in Middleton, Tenn., had talked about the pros and cons of online social networking.
After the shooting, the positive side of all that electronic connectivity became apparent. In an e-mail, Craft described the family’s experience:
“We have been able to keep friends and family informed of Grant’s problems and progress through e-mails, texts and Facebook. …When we post something on Facebook, it is transported by so many people to so many places that the number of people praying for Grant, his wife, his three daughters and our entire family cannot be counted. Our lives have been involved with so many congregations of the Lord’s church. To know that prayers are being offered by so many people in so many places shows us the power of our God.”

Grant’s mother, Faye, died in 2006. His father, Jim, a trustee for Freed-Hardeman University, remains active with the Covington church. Crystal Edmonds’ parents, Joe and Faye Venable, attend the South Jackson Church of Christ in Tennessee.
In a recent Facebook post, Craft shared news of Grant’s improvement but noted that he “has got to get to eating!”
Fellow church member Elaine Watkins immediately volunteered to bake Grant “an apple pie that his daddy likes so much.”
“Daddy will probably be babysitting him some, so I’m sure they both would like that!” Craft replied.
Craft knows it might sound strange at a time like this, but she said the family “has been truly blessed” by the outpouring of love and prayers.
When there’s nothing you can do but pray, Jeff Phillips said, “you tend to realize that God’s working.
“I personally believe that whether you can see it or not, God’s working,” he added. “But when you do see it and begin to understand the impact that one individual really has, that one family really has, and how much people care, the spiritual impact is phenomenal.”
What kind of guy is Grant Edmonds?
He’s the kind who can help family and friends see God more clearly, even in the midst of a senseless act of violence.
Bobby Ross Jr. is Managing Editor of The Christian Chronicle. Reach him at [email protected]