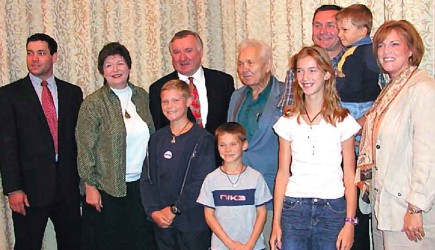 Staff reports
WARSAW, Poland — The seventh Pan European Lectureship brought 95 church members from the United States and abroad to the European capital of Warsaw. The July 31-Aug. 5 lectures also gave church members the chance to honor Walenty Dawidow and his family, who played a critical role in a food relief program among churches of Christ in 1981-82.
More than seven years before the Iron Curtain fell, a drought following a severe winter, combined with Soviet Union oppression in the wake of the Solidarity movement, created food shortages in Poland. Churches raised $1.5 million to help, coordinated by missionaries including Bill McDonough, Royce Sartain, Don Yelton and Murray Czeczotka.

Dawidow and his son, Marek, helped distribute relief in Poland. Another son, Michael, coordinated efforts from Vienna, Austria, where he served as a missionary.