PORTALES, N.M. — I didn’t meet any of Portales’ “three or four old grouches” during a reporting trip to this eastern New Mexico community this week.

I did enjoy visiting with the kind, welcoming folks at New Mexico Christian Children’s Home.

That 65-year-old ministry serves dozens of single-mother families as well as numerous children of Liberian refugees. Look for the inspiring story in a future edition of The Christian Chronicle.

By the way, on the 375-mile drive from Oklahoma City to Portales, I stopped for lunch at a famous steakhouse just off Interstate 40 in Amarillo, Texas.

A light lunch on the way to New Mexico, and it’s free if I eat this little steak. #Amarillo #Texas #reporterlife

In case my wife is reading, I didn’t really order the 72-ounce steak. I went with the lunch portion of the chicken-fried steak (67 ounces lighter than the big piece of beef).

That is true, but it was delicious.

• New Jersey church loses building in fire: “We have a sunroof here,” minister Ken Spence joked in a Facebook video this week after a blaze at Camden Church of Christ in New Jersey. Humor has helped Spence and the congregation’s 50 members cope with the reality that their building was destroyed, reports Chellie Ison, the Chronicle’s digital news editor. 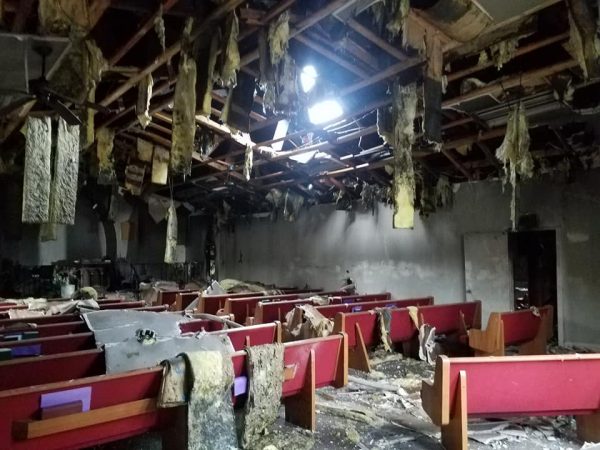 Fire damage can be seen inside the auditorium of the Camden Church of Christ in New Jersey.

• ‘What-a-couple’ gets Whataburger surprise: A Lubbock, Texas, couple “who visit their neighborhood Whataburger religiously got a special surprise from their favorite fast-food chain restaurant for their 62nd anniversary,” NBC affiliate KCBD reports. Billy Joe and Denora Morman are members of the Sunset Church of Christ in Lubbock.

A Lubbock couple who visit their neighborhood Whataburger religiously got a special surprise from their favorite fast-food chain restaurant for their 62nd anniversary. https://t.co/J7CCDBKosH

• Dallas prosecutors object to moving Amber Guyger’s trial for shooting Botham Jean: Defense attorneys filed a motion arguing that the publicity surrounding Jean’s shooting death was so pervasive and inflammatory that Guyger could not receive a fair trial in Dallas, the Dallas Morning News reports. If you missed it, check out my recent interview with Jean’s parents. The Harding University graduate was a beloved song leader and Bible class teacher for the Dallas West Church of Christ.

• Trump and China tariffs: Is there really a chance of a Bible shortage?: In a post for GetReligion, I discuss an Associated Press news report out of Nashville, Tenn. As AP notes, Bible publishers are concerned that President Donald Trump’s most recent proposed tariffs on Chinese imports could result in a Bible shortage.

Trump, China tariffs and God's holy word: Is there really a chance of a Bible shortage? https://t.co/SCw6mjTF7W

• A male gubernatorial candidate, a female reporter and a furor over ‘Billy Graham rule’: A little-known Republican candidate for Mississippi governor is getting national attention after declining to grant a female reporter’s request to shadow him (unless she brought a male colleague along).

Finally, a picture of devotion to worshiping God

Archie Ross (no relation to this writer) has been a member of the Brown Trail Church of Christ in Bedford, Texas, for many years.

P.S. On the drive to New Mexico, I finished reading (actually, listening via Audible) to Jennifer Berry Hawes’ book “Grace Will Lead Us Home” about the June 17, 2015, massacre at Emanuel AME Church in Charleston, S.C. The reporting and storytelling are exceptional. I highly recommend it.

Filed under: Inside Story National