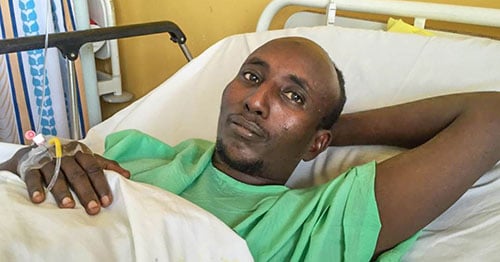 Editorial Council
We thank God for the actions of Salah Sabdow Farah — a Muslim teacher in the African nation of Kenya.

In December, he was one of 100 passengers on a bus ambushed by Islamic militants from al-Shabab. They demanded that Muslim and Christian passengers split up. (The terrorist group had spared Muslims in previous attacks.)

Farah and several other Muslim passengers refused, defiantly telling the terrorists to “kill all of us or leave us alone,” a Kenyan newspaper reported. In the end, two people died in the attack, and Farah received a bullet wound.

Too many of us in the pews see Farah as the exception and the terrorists as the norm when it comes to Islam. We shake our fists and beg our fellow Christians to “wake up” and fight the threat lurking at our gates.

It’s wrong for us to react in anger, to paint with too broad a brush, to answer hatred with hatred. Yet we acknowledge that our fear is based on real horror — such as we’ve seen in Paris and San Bernardino.

At the same time, too few of us in the media focus on stories such as the Marrakesh Declaration, a 750-word document calling for religious freedom for non-Muslims in majority-Muslim countries. It is the product of a recent summit in Morocco that included more than 250 Muslim religious leaders, heads of state and scholars from predominantly Muslim nations. Participants drew inspiration from Muhammad’s Charter of Medina, a seventh-century document that gives rules for governing a religiously pluralistic state.

As we ponder these developments:
• We pray that this declaration is more than words, that Christian minorities will have protection and freedom to worship — wherever they live. Our hope in this declaration is admittedly thin, but we know what God can do with even mustard-seed faith.

• We pray that the Muslims among us and those in faraway lands will come to know and accept Christ.

• We pray for more Muslims like Farah, who, sadly, died in a Kenyan hospital from his wounds about a month after the attack.

Before his death, he spoke to Voice of America.