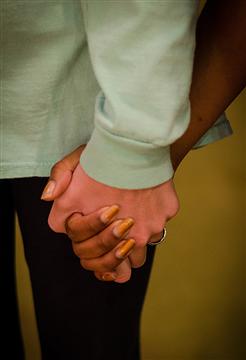 Editorial: Resist the urge to ‘do something’

No offense,  Matthew West , but sometimes the worst thing we can do is “something.”

West is a contemporary Christian artist whose hits include “My Own Little World” and “Hello, My Name Is.”

After meeting a young woman serving orphans in Uganda, he penned the song “Do Something.”

Well, I just couldn’t bear the thought of people living in poverty, children sold into slavery. The thought disgusted me. So I shook my fist at heaven, said, “God, why don’t you do something?” He said, “I did. I created you.”

Amen! So what should we do?

The lyrics don’t include many suggestions. (Granted, it’s asking a lot of a four-minute song to tackle the complex issues of extreme poverty and human trafficking.)
Instead, West focuses on his desire to make a difference: I don’t want a flame, I want a fire. I wanna be the one who stands up and says, “I’m gonna do something.”
The repetition of “I” concerns us. “I”-fueled desire drives us to help in ways that don’t help — fighting poverty by creating dependence on American dollars, assisting in disaster relief only until the TV cameras move on, healing the sick while neglecting their spiritual poverty and need for Christ.

• 11 girls from Churches of Christ among the abducted

We must give smart aid to those in need. Speak to the leaders of ministries with experience in developing nations. Work alongside disaster relief organizations toward long-term recovery strategies. We recommend books such as “Toxic Charity: How Churches and Charities Hurt Those They Help, And How to Reverse It” by Robert Lupton and “ When Helping Hurts: How to Alleviate Poverty Without Hurting the Poor … and Yourself” by Steve Corbett and Brian Fikkert.
The latter two authors ask us to reconsider the meaning of poverty, which stems from the broken relationship between man and God. Each of us suffers from a form of poverty, and only through Christ can we find healing — for ourselves and the world.
As followers of Jesus, we must use our God-given abilities to formulate faith-based, prayer-driven, sustainable solutions for the plagues of our planet.
Seeking and saving the lost in a sick, dying world requires us to do so much more than “something.”
***********
Editor’s note: We are extremely thankful for the responses we’ve received to this piece so far. Clearly, Matthew West’s song has inspired many of you to “do something” that is meaningful, thoughtful and helpful, shining Christ’s light into the darkness.

I would be honored if you would follow the links to the rest of the pieces in our package on the faithful fight against human trafficking. There you’ll find stories of people who are committed to doing something that helps — making a difference and seeking justice for the oppressed.

I think human rights advocate Salem Afangideh says it best in our piece on the #BringBackOurGirls movement. “Thank you for caring … Now, go find ways to actually and practically fight against injustice.”

•  From modern-day slave to slave for Christ