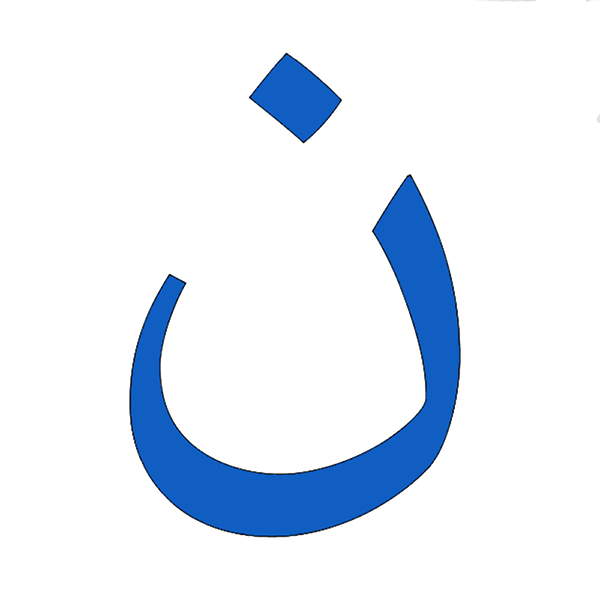 Editorial: In support of ‘nun’ Christians

Editorial Council
God chose the weak things of this world to shame the strong.
That’s what the apostle Paul tells us in his first letter to the church in Corinth.
It’s difficult to see the truth in those words as we watch news reports of the weak — thousands of people in Iraq, many of whom profess Christ — fleeing from the strong.
A brutal, jihadist militia, called the Islamic State of Iraq and Syria, or ISIS, has forced religious minorities to wander the wilderness, without food or shelter.
We lament the lives already lost in Iraq ­— Iraqis, Americans, allies. We mourn for the journalists, including Steven Sotloff and James Foley, beheaded by ISIS.

When we consider the situation in Iraq, we’re reminded of Jesus’ words from Matthew 12 about a demon, driven from a house, who returns with seven others spirits “more wicked than itself” to take up residence there.
The above symbol reportedly was spray-painted on the homes and businesses of followers of Christ in Mosul, Iraq, after ISIS seized the city. It’s the Arabic letter nun (pronounced “noon”), the first letter of Nasrani, or Nazarene, used to refer to Christians. ISIS told them to convert, pay a tax, leave the city or face the sword.
The militants also threatened the Shiite Muslim minority in Mosul, whom they consider to be heretics.

We balk a bit at “hashtag activism” such as this — often more trendy than helpful. But we can’t help but note how this little Arabic letter mirrors another symbol — one created by the Romans to inspire obedience to the state through fear of brutal punishment.

Christians and Muslims have expressed outrage. On social media, the Arabic letter has taken flight, appearing on Facebook pages and in Twitter feeds (#WeAreN).
A symbol born of hate is now a symbol of solidarity.
We balk a bit at “hashtag activism” such as this — often more trendy than helpful. But we can’t help but note how this little Arabic letter mirrors another symbol — one created by the Romans to inspire obedience to the state through fear of brutal punishment. That symbol now means life, healing and hope for people worldwide.
We turn to this symbol, the cross, as we pray for opportunities to help the hurting — in Iraq and in our communities. May God protect all victims of oppression.
May all have the opportunity to learn the life-giving message of Christ.
May the weak shame the strong.