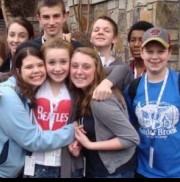 EDITORIAL: 2011 — Numbers that inspired us

By The Editorial Council
Fellow Christians, you inspire us. As 2011 gives way to 2012, let us count the ways. These are a just a few of our favorite “numbers” from this past year:
• 9: Age of Davis Burton, member of the Pleasant Valley Church of Christ in Little Rock, Ark., as he delivered an incredible sermon on the blessings of daily Bible reading.
• 17: Hours driven by 31 teens and 10 chaperones from seven New England congregations to the Winterfest youth rally in Gatlinburg, Tenn.
• 20: Age of Kayla Bilby, inner-city missionary who serves the poor and downtrodden through the Contact Church of Christ in Tulsa, Okla.
• 25: Consecutive years of record enrollment by Harding University in Searcy, Ark.
• 27: Children for whom minister Dieugrand Jean cares in an earthquake-ravaged shanty town in Port-au-Prince, Haiti.


• 30: Jersey number of Boston Bruins goalie Tim Thomas, member of the Burlington Church of Christ, named most valuable player as his team won its first Stanley Cup since 1972.
• 32: Single-family houses built by the Northeast Church of Christ in Oklahoma City as it aims to provide salt, light — and affordable living — in its urban community.
• 50: Years that Eastern European Mission has produced Bibles and Christian literature for the Soviet, and post-Soviet, world — and the number of years that have passed since a pioneering mission team arrived in Sao Paulo, Brazil.
• 61: Age of Alan Moore, Vietnam veteran and kicker at Faulkner University in Montgomery, Ala., the oldest player in college football history.
• 108: Age of Lula Wallace when she accepted Jesus Christ as her savior and was baptized at the Norris Road Church of Christ in Memphis, Tenn.
• 193: Countries in the world since South Sudan became the newest nation, allowing thousands of Sudanese baptized in refugee camps to return home and plant churches.
• 258: Room number for Steve Hawley, Bible teacher at Westbury Christian School in Houston, whose passion for teaching God’s word earned him the National Christian School Association’s Teacher of the Year Award.
• 275: Combined years of preaching in the Los Angeles area by six ministers: Billy Curl, O.J. Dyson, Carl C. Baccus, Calvin Bowers, Ellis Lewis Sr. and Burl Lundy.
• 15,000: Doors knocked by “foot soldiers” during the Crusade for Christ evangelistic campaign in the Washington, D.C., area.
• 30,000: Baptism requests each year by World Bible School students.
• 250,000: Monthly readers of The Christian Chronicle.
We deeply appreciate everyone who reads the Chronicle, particularly the many donors who provide generous financial support that allows us to bring you the news in print each month and online as it occurs at www.christianchronicle.org.
May God continue to bless you and yours in the new year.